*     The encoded bits depend on the current k input bits and a few past input bits.

*     The main decoding strategy for convolutional codes is based on the widely used Viterbi algorithm.

*     The constraint length parameter, K, denotes the "length" of the convolutional encoder, i.e. how many k-bit stages are available to feed the combinatorial logic that produces the output symbols. Closely related to K is the parameter m, which can be thought of as the memory length of the encoder. A simple convolutional encoder is shown below(fig 3.1The information bits are fed in small groups of k-bits at a time to a shift register. The output encoded bits are obtained by modulo-2 addition (EXCLUSIVE-OR operation) of the input information bits and the contents of the shift registers which are a few previous information bits. 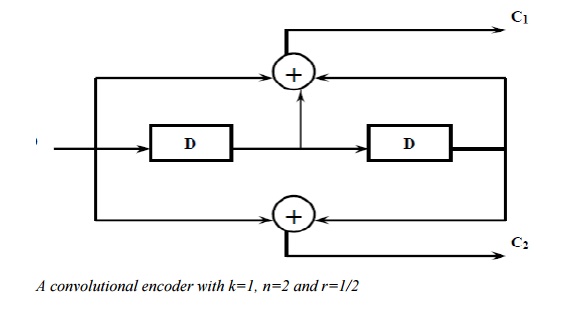 The operation of a convolutional encoder can be explained in several but equivalent ways such as, by

A convolutional encoder may be defined as a finite state machine. Contents of the rightmost (K-1) shift register stages define the states of the encoder. So, the encoder in Fig. 3.1 has four states.

A new input bit causes a transition from one state to another. 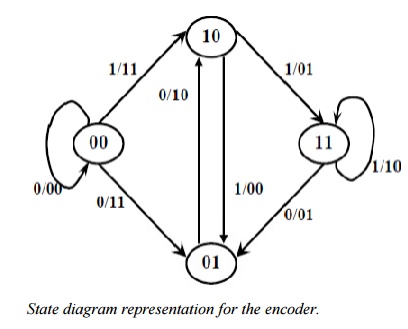 The tree diagram representation shows all possible information and encoded sequences for the convolutional encoder. Fig. 3.3 shows the tree diagram for the encoder in Fig. 3.1. The encoded bits are labeled on the branches of the tree. Given an nput sequence, the encoded sequence can be directly read from the tree. Representing convolutional codes compactly: code trellis and state diagram: State diagram 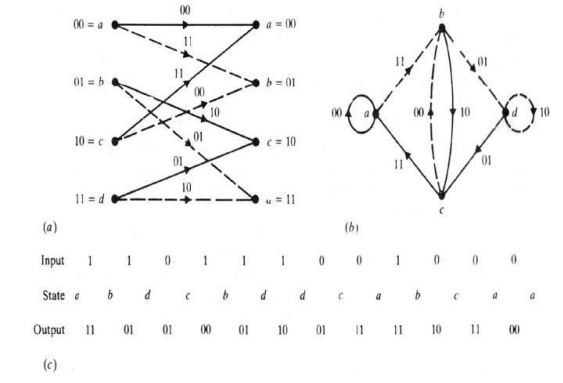 • Hence there are 2k branches leaving each state

Distance for some convolutional codes: 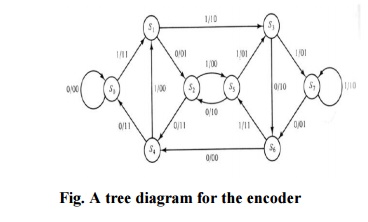 The trellis diagram of a convolutional code is obtained from its state diagram. All state transitions at each time step are explicitly shown in the diagram to retain the time dimension, as is present in the corresponding tree diagram.

It is interesting to note that the trellis diagram, which describes the operation of the encoder, is very convenient for describing the behavior of the corresponding decoder, especially when the famous „Viterbi‟isfollowed. Algorithm (VA) 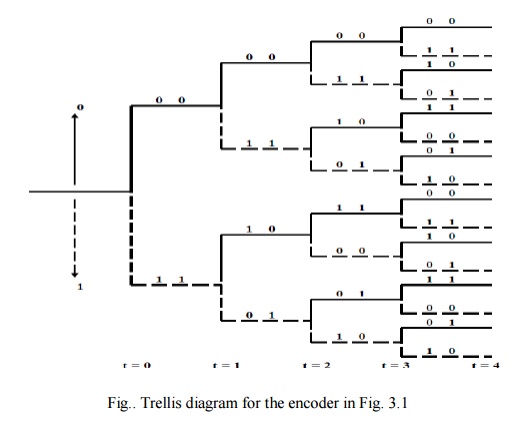 i)Draw the encoder circuit corresponding to this code (3)