Control of Gene Function and Biochemical Activity in Cells 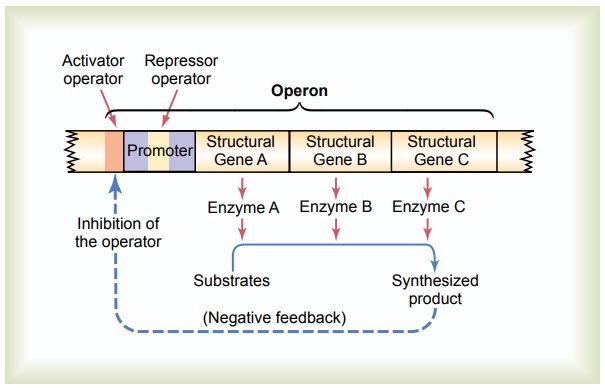 From our discussion thus far, it is clear that the genes control both the physical and the chemical functions of the cells.

Control of Gene Function and Biochemical Activity in Cells

From our discussion thus far, it is clear that the genes control both the physical and the chemical functions of the cells. However, the degree of activation of respective genes must be controlled as well; otherwise, some parts of the cell might overgrow or some chem-ical reactions might overact until they kill the cell. Each cell has powerful internal feedback control mechanisms that keep the various functional opera-tions of the cell in step with one another. For each gene (more than 30,000 genes in all), there is at least one such feedback mechanism.

The “Operon” of the Cell and Its Control of Biochemical Syn-thesis—Function of the Promoter. Synthesis of a cellularbiochemical product usually requires a series of reac-tions, and each of these reactions is catalyzed by a special protein enzyme. Formation of all the enzymes needed for the synthetic process often is controlled by a sequence of genes located one after the other on the same chromosomal DNA strand. This area of the DNA strand is called an operon,and the genes respon-sible for forming the respective enzymes are called structural genes. In Figure 3–12, three respectivestructural genes are shown in an operon, and it is demonstrated that they control the formation of three respective enzymes that in turn cause synthesis of a specific intracellular product. 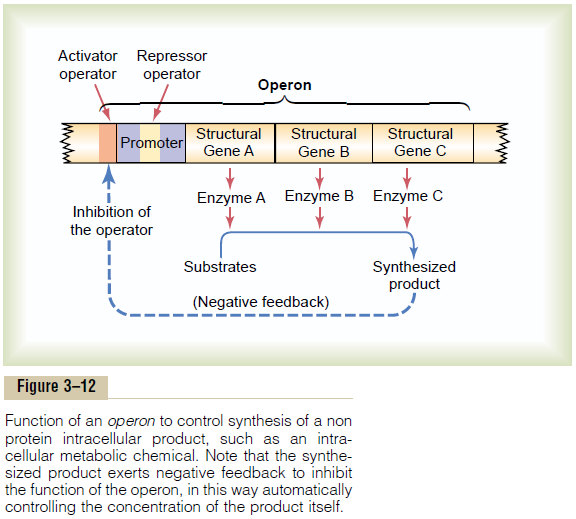 Note in the figure the segment on the DNA strand called the promoter. This is a group of nucleotides that has specific affinity for RNA polymerase, as already discussed. The polymerase must bind with this pro-moter before it can begin traveling along the DNA strand to synthesize RNA. Therefore, the promoter is an essential element for activating the operon.

Control of the Operon by a “Repressor Protein”—The “Repressor Operator.” Also note in Figure 3–12 an addi-tional band of nucleotides lying in the middle of the promoter. This area is called a repressor operator because a “regulatory” protein can bind here and prevent attachment of RNA polymerase to the pro-moter, thereby blocking transcription of the genes of this operon. Such a negative regulatory protein is called a repressor protein.

Control of the Operon by an “Activator Protein”—The “Activa-tor Operator.” Note in Figure 3–12 another operator,called the activator operator, that lies adjacent to but ahead of the promoter. When a regulatory protein binds to this operator, it helps attract the RNA po-lymerase to the promoter, in this way activating the operon. Therefore, a regulatory protein of this type is called an activator protein.

Negative Feedback Control of the Operon. Finally, note inFigure 3–12 that the presence of a critical amount of a synthesized product in the cell can cause negative feedback inhibition of the operon that is responsible for its synthesis. It can do this either by causing a regulatory repressor protein to bind at the repressor operator or by causing a regulatory activator protein to break its bond with the activator operator. In either case, the operon becomes inhibited. Therefore, once the required synthesized product has become abun-dant enough for proper cell function, the operon becomes dormant. Conversely, when the synthesized product becomes degraded in the cell and its concen-tration decreases, the operon once again becomes active. In this way, the desired concentration of the product is controlled automatically.

Other Mechanisms for Control of Transcription by the Operon.

Variations in the basic mechanism for control of the operon have been discovered with rapidity in the past 2 decades. Without giving details, let us list some of them:

1.     An operon frequently is controlled by a regulatory gene located elsewhere in the geneticcomplex of the nucleus. That is, the regulatory gene causes the formation of a regulatory protein that in turn acts either as an activator or as a repressor substance to control the operon.

2.     Occasionally, many different operons are controlled at the same time by the same regulatory protein. In some instances, the same regulatory protein functions as an activator for one operon and as a repressor for another operon. When multiple operons are controlled simultaneously in this manner, all the operons that function together are called a regulon.

3.     Some operons are controlled not at the starting point of transcription on the DNA strand but farther along the strand. Sometimes the control is not even at the DNA strand itself but during the processing of the RNA molecules in the nucleus before they are released into the cytoplasm; rarely, control might occur at the level of protein formation in the cytoplasm during RNA translation by the ribosomes.

4.     In nucleated cells, the nuclear DNA is packaged in specific structural units, the chromosomes. Within each chromosome, the DNA is wound around small proteins called histones, which in turn are held tightly together in a compacted state by still other proteins. As long as the DNA is in this compacted state, it cannot function to form RNA. However, multiple control mechanisms are beginning to be discovered that can cause selected areas of chromosomes to become decompacted one part at a time so that partial RNA transcription can occur. Even then, some specific “transcriptor factor” controls the actual rate of transcription by the separate operon in the chromosome. Thus, still higher orders of control are used for establishing proper cell function. In addition, signals from outside the cell, such as some of the body’s hormones, can activate specific chromosomal areas and specific transcription factors, thus controlling the chemical machinery for function of the cell.

Because there are more than 30,000 different genes in each human cell, the large number of ways in which genetic activity can be controlled is not surprising. The gene control systems are especially important for con-trolling intracellular concentrations of amino acids, amino acid derivatives, and intermediate substrates and products of carbohydrate, lipid, and protein metabolism.

In addition to control of cell function by genetic regulation, some cell activities are controlled by intra-cellular inhibitors or activators that act directly on spe-cific intracellular enzymes. Thus, enzyme regulation represents a second category of mechanisms by which cellular biochemical functions can be controlled.

Enzyme Inhibition. Some chemical substances formed inthe cell have direct feedback effects in inhibiting the specific enzyme systems that synthesize them. Almost always the synthesized product acts on the first enzyme in a sequence, rather than on the subsequent enzymes, usually binding directly with the enzyme and causing an allosteric conformational change that inac-tivates it. One can readily recognize the importance of inactivating the first enzyme: this prevents buildup of intermediary products that are not used.

Enzyme inhibition is another example of negative feedback control; it is responsible for controlling intracellular concentrations of multiple amino acids, purines, pyrimidines, vitamins, and other substances.

Enzyme Activation. Enzymes that are normally inactiveoften can be activated when needed. An example of this occurs when most of the ATP has been depleted in a cell. In this case, a considerable amount of cyclic adenosine monophosphate (cAMP) begins to be formed as a breakdown product of the ATP; the pres-ence of this cAMP, in turn, immediately activates the glycogen-splitting enzyme phosphorylase, liberating glucose molecules that are rapidly metabolized and their energy used for replenishment of the ATP stores. Thus, cAMP acts as an enzyme activator for the enzyme  phosphorylase  and  thereby  helps  control intracellular ATP concentration.

Summary. In summary, there are two principal methodsby which cells control proper proportions and proper quantities of different cellular constituents: (1) the mechanism of genetic regulation and (2) the mecha-nism of enzyme regulation. The genes can be either activated or inhibited, and likewise, the enzyme systems can be either activated or inhibited. These reg-ulatory mechanisms most often function as feedback control systems that continually monitor the cell’s biochemical composition and make corrections as needed. But on occasion, substances from without the cell (especially some of the hormones discussed throughout this text) also control the intracellular biochemical reactions by activating or inhibiting one or more of the intracellular control systems.