Given the expression Bi I I B2, if we determine that B1 is true, then we can conclude that the entire expression is true without having to evaluate B2.

In short-circuit (or jumping) code, the boolean operators &&, I I, and ! trans-late into jumps. The operators themselves do not appear in the code; instead, the value of a boolean expression is represented by a position in the code se-quence.

might be translated into the code of Fig. 6.34. In this translation, the boolean expression is true if control reaches label L2. If the expression is false, control goes immediately to Lu skipping L2 and the assignment x = 0. 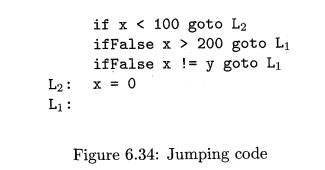 We now consider the translation of boolean expressions into three-address code in the context of statements such as those generated by the following grammar:

In these productions, nonterminal B represents a boolean expression and non-terminal S represents a statement.

This grammar generalizes the running example of while expressions that we introduced in Example 5.19. As in that example, both B and S have a synthe-sized attribute code, which gives the translation into three-address instructions. For simplicity, we build up the translations B.code and S.code as strings, us-ing syntax-directed definitions. The semantic rules defining the code attributes could be implemented instead by building up syntax trees and then emitting code during a tree traversal, or by any of the approaches outlined in Section 5.5. 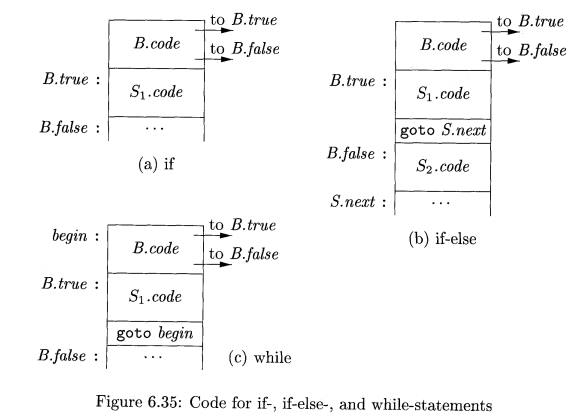 The syntax-directed definition in Fig. 6.36-6.37 produces three-address code for boolean expressions in the context of if-, if-else-, and while-statements. 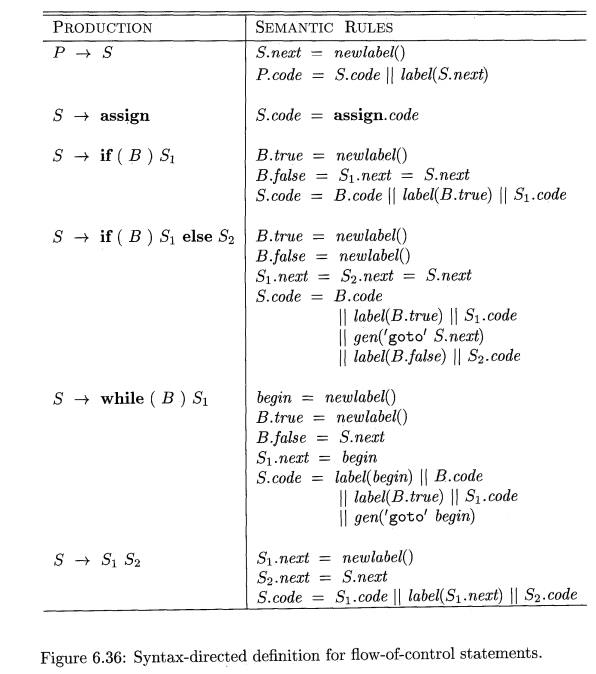 We assume that newlabelQ creates a new label each time it is called, and that label(L) attaches label L to the next three-address instruction to be generated.

A program consists of a statement generated by P -> S. The semantic rules associated with this production initialize S.next to a new label. P.code consists of S.code followed by the new label S.next. Token assign in the production S —> assign is a placeholder for assignment statements. The translation of assignments is as discussed in Section 6.4; for this discussion of control flow, S.code is simply assign.code.

In translating S ->• if (B) Si, the semantic rules in Fig. 6.36 create a new label B.true and attach it to the first three-address instruction generated for the statement Si, as illustrated in Fig. 6.35(a). Thus, jumps to B.true within the code for B will go to the code for Si. Further, by setting B.false to S.next, we ensure that control will skip the code for Si if B evaluates to false.

We discuss the translation of flow-of-control statements further in Section 6.7. There we shall see an alternative method, called "backpatching," which emits code for statements in one pass.

The semantic rules for boolean expressions in Fig. 6.37 complement the semantic rules for statements in Fig. 6.36. As in the code layout of Fig. 6.35, a boolean expression B is translated into three-address instructions that evaluate B using creates labels only when they are needed. Alternatively, unnecessary labels can be eliminated during a subsequent optimization phase.

conditional and unconditional jumps to one of two labels: B.true if B is true, and B.false if B is false. 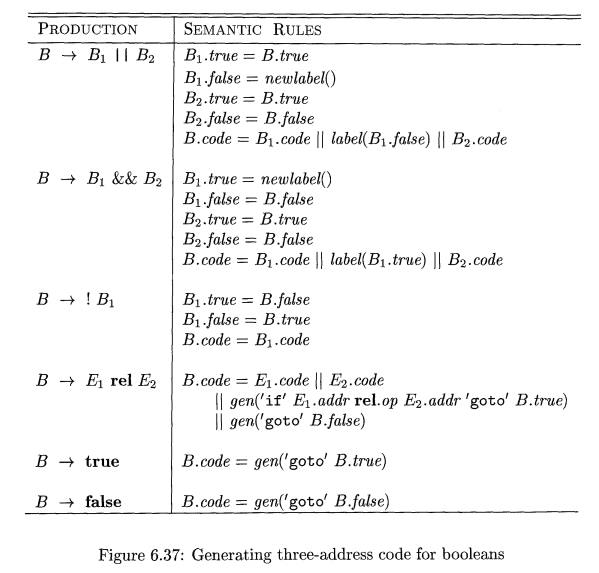 The fourth production in Fig. 6.37, B E1 rel E2, is translated directly into a comparison three-address instruction with jumps to the appropriate places. For instance, B of the form a < b translates into:

The remaining productions for B are translated as follows:

The constants t r u e and false translate into jumps to B.true and B.false, respectively.

The statement (6.13) constitutes a program generated by P -> S from Fig. 6.36. The semantic rules for the production generate a new label L1 for the instruction after the code for S. Statement S has the form if (B) Si, where Si is x = 0;, so the rules in Fig. 6.36 generate a new label L2 and attach it to the first (and only, in this case) instruction in Si.code, which is x = 0.

In Example 6.22, the comparison x > 200 translates into the code fragment:

This i f F a l s e instruction takes advantage of the natural flow from one instruction to the next in sequence, so control simply  "falls through"  to label L4    if x > 200 is false, thereby avoiding a jump .

In the code layouts for if- and while-statements in Fig. 6.35, the code for statement S± immediately follows the code for the boolean expression B. By using a special label fall (i.e., "don't generate any jump"), we can adapt the semantic rules in Fig. 6.36 and 6.37 to allow control to fall through from the code for B to the code for Si . The new rules for S -> if (B) Si in Fig. 6.36 set B.true to fall:

Similarly, the rules for if-else- and while-statements also set B.true to fall We now adapt the semantic rules for boolean expressions to allow control to fall through whenever possible. The new rules for B —> E1 rel E2 in Fig. 6.39 generate two instructions, as in Fig. 6.37, if both B.true and B.false are explicit labels; that is, neither equals fall. Otherwise, if B.true is an explicit label, then B.false must be fall, so they generate an if instruction that lets control fall through if the condition is false. Conversely, if B.false is an explicit label, then they generate an i f F a l s e instruction. In the remaining case, both B.true and B.false are fall, so no jump in generated.9

In the new rules for B Bi II B2 in Fig. 6.40, note that the meaning of label fall for B is different from its meaning for Bi. Suppose B.true is fall; i.e, control falls through B, if B evaluates to true. Although B evaluates to true if Bi does, Bi.true must ensure that control jumps over the code for B2 to get to the next instruction after B.

On the other hand, if Bi evaluates to false, the truth-value of B is determined by the value of B2, so the rules in Fig. 6.40 ensure that Bi.false corresponds to control falling through from Bi to the code for B2.

We leave them as an exercise. 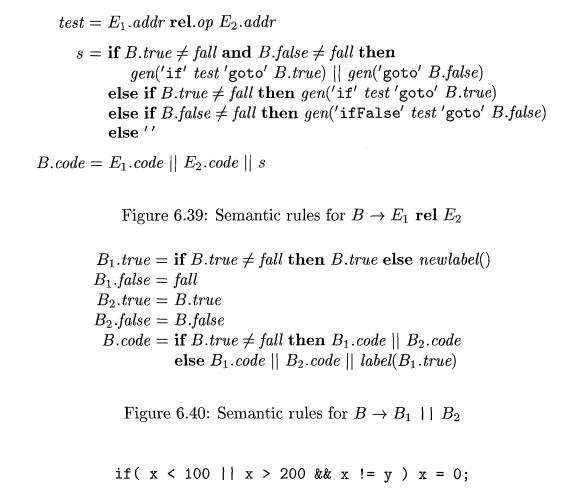 A clean way of handling both roles of boolean expressions is to first build a syntax tree for expressions, using either of the following approaches:

1. Use two passes. Construct a complete syntax tree for the input, and then walk the tree in depth-first order, computing the translations specified by the semantic rules.

2. Use one pass for statements, but two passes for expressions. With this approach, we would translate E in while (E) Si before Si is examined. The translation of E, however, would be done by building its syntax tree and then walking the tree.

The following grammar has a single nonterminal E for expressions:

We can handle these two roles of expressions by using separate code-genera-tion functions. Suppose that attribute E.n denotes the syntax-tree node for an expression E and that nodes are objects. Let method jump generate jumping code at an expression node, and let method rvalue generate code to compute the value of the node into a temporary.

When E appears in S ->• while (E) Si, method jump is called at node E.n. The implementation of jump is based on the rules for boolean expressions in Fig. 6.37. Specifically, jumping code is generated by calling E.n.jump(t, /), where t is a new label for the first instruction of Si.code and / is the label S.next.

Exercise 6 . 6 . 1 : Add rules to the syntax-directed definition of Fig. 6.36 for the following control-flow constructs:

a) A repeat-statment repeat  S while B.

Exercise 6 . 6 . 2 : Modern machines try to execute many instructions at the same time, including branching instructions. Thus, there is a severe cost if the machine speculatively follows one branch, when control actually goes another way (all the speculative work is thrown away). It is therefore desirable to min-imize the number of branches. Notice that the implementation of a while-loop in Fig. 6.35(c) has two branches per interation: one to enter the body from the condition B and the other to jump back to the code for B. As a result, it is usually preferable to implement while (B) S as if it were if (B) { repeat S until 1(B) }. Show what the code layout looks like for this translation, and revise the rule for while-loops in Fig. 6.36.

Exercise 6 . 6 . 3 : Suppose that there were an "exclusive-or" operator (true if and only if exactly one of its two arguments is true) in C. Write the rule for this operator in the style of Fig. 6.37.

Exercise 6 . 6 . 8 : Section 6.6.5 talks about using fall-through code to minimize the number of jumps in the generated intermediate code. However, it does not take advantage of the option to replace a condition by its complement, e.g., replace if a < b  goto  Li;  g o t o  L2   by if b >= a  goto  L2;  goto  L1.  Develop a SDD that does take advantage of this option when needed.