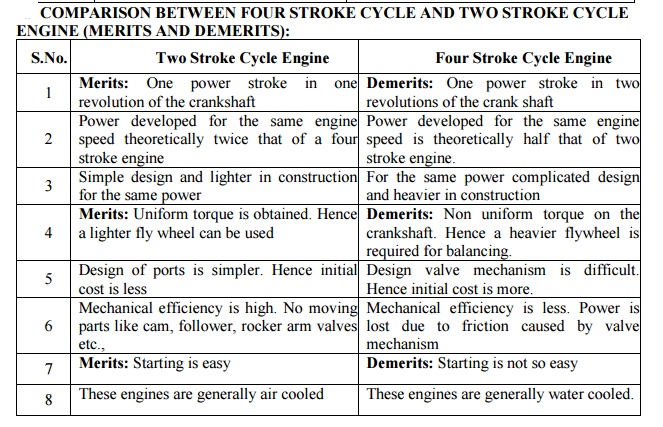 Merits:   One   power   stroke   in   one revolution of the crankshaft

Simple design and lighter in construction for the same power

Merits: Uniform torque is obtained. Hence a lighter fly wheel can be used

Design  of  ports  is  simpler.  Hence  initial cost is less

These engines are generally air cooled

Demerits:  One  power  stroke  in  two revolutions of the crank shaft

Power  developed  for  the  same  engine  speed  is  theoretically  half  that  of  two stroke engine.

For the same power complicated design and heavier in construction

Demerits:  Non  uniform  torque  on  the crankshaft.  Hence  a  heavier  flywheel  is required for balancing.

Mechanical  efficiency  is  less.  Power  is lost  due  to  friction  caused  by  valve mechanism

Demerits: Starting is not so easy

These engines are generally water cooled. 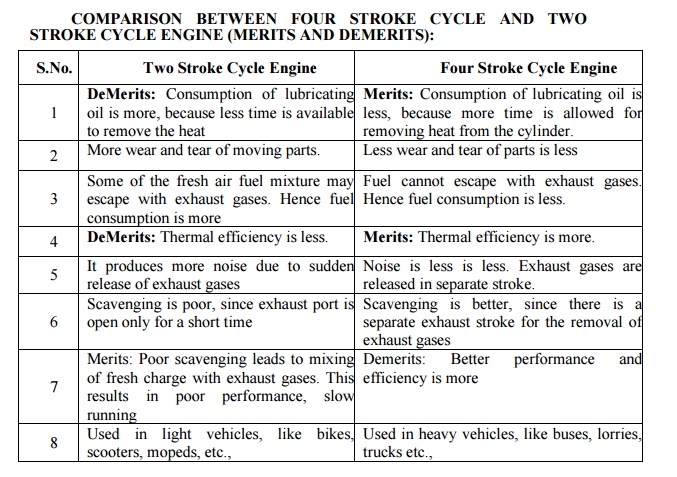 DeMerits: Consumption of lubricating oil is more, because less time is available to remove the heat

Some of the fresh air fuel mixture may escape with exhaust gases. Hence fuel consumption is more

It produces more noise due to sudden release of exhaust gases

Scavenging is poor, since exhaust port is open only for a short time

Merits: Consumption of lubricating oil is less, because more time is allowed for removing heat from the cylinder.

Less wear and tear of parts is less

Noise is less is less. Exhaust gases are released in separate stroke.

Scavenging is better, since there is a separate exhaust stroke for the removal of exhaust gases