Based on the tri stimulus theory of vision, our eyes perceive color through the stimulationof three visual pigments in the cones of the retina. These visual pigments have a peak sensitivity at wavelengths of about 630 run (red), 530 nm (green), and 450 nm (blue).

Based on the tri stimulus theory of vision, our eyes perceive color through the stimulationof three visual pigments in the cones of the retina. These visual pigments have a peak sensitivity at wavelengths of about 630 run (red), 530 nm (green), and 450 nm (blue).

By comparing intensities in a light source, we perceive the color of the light. This theory of vision is the basis for displaying color output on a video monitor using the three color primaries, red, green, and blue, referred to as the RGB color model.

We can represent this model with the unit cube defined on R,G, and B axes,

As with the XYZ color system, the RGB color scheme is an additive model.

Intensities of the primary colors are added to produce other colors. Each color point within the bounds of the cube can be represented as the triple (R, G, B), where values for R, G, and B are assigned in the range from 0 to 1. Thus, a color C, is expressed in RGB components as

The magenta vertex is obtained by adding red and blue to produce the triple (1,0,l). and white at (1,l. 1) is thesum of the red, green, and blue vertices. Shadesof gray are represented along the main diagonal of the cube from the origin(black) to the white vertex.

Each point along this diagonal has an equal contributionfrom each primary color, so that a gray shade halfway between black and white is represented as (0.5, 0.5, 0.5). 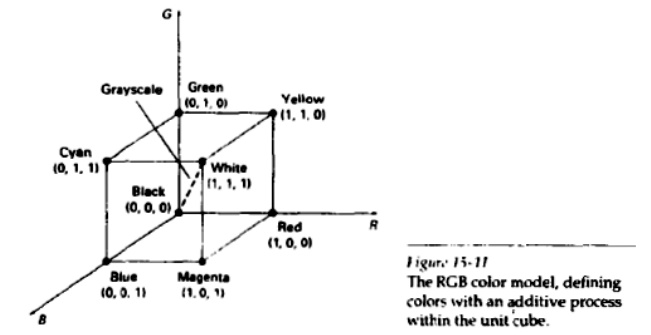 . The National Television System Committee (NTSC) color model for forming the composite video signal is the YIQ model, which is based on concepts in the CIE XYZ model.

In the YI Q color model, parameter Y is the same as in the XYZ model. Luminance (brightness) information is contained in the Y parameter, while chromaticity information (hue and purity) is incorporated into the 1 and Q parameters.

A combination of red, green, and blue intensities is chosen for the Y parameter to yield the standard luminosity curve. Since Y contains the luminance information, black-and-white television monitors use only the Y signal.

This transformation is based on the NTSC standard RGB phosphor, whose chromaticity coordinates were given in the preceding section. The larger proportions of red and green assigned to parameter Y indicate the relative importance of these hues in determining brightness, compared to blue.

An NTSC video signal can be converted to an RGB signaul sing an NTSC decoder, which separates the video signal into the YlQ components,'then converts to RGB values. We convert from YIQ space to RGB space with the inverse matrix transformation from Eq. 15-6:

1 A color model defined with the primary colors cyan, magenta, and yellow (CMY) is useful for describing color output to hard-copy devices.

Unlike video monitors, which produce a color pattern by combining light from the screen phosphors, hard-copy devices such as plotters produce a color picture by coating a paper with color pigments. We see the colors by reflected light, a subtractive process. 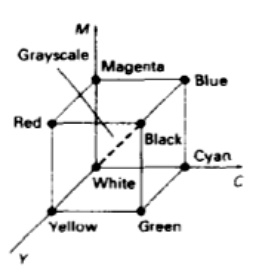 In the CMY model, point (1, 1, 1) represents black, because all components of the incident light are subtracted. The origin represents white light.

Equal amounts of each of the primary colors produce grays, along the main diagonal of the cube. A combination of cyan and magenta ink produces blue light, becausethe red and green components of the incident light are absorbed. Other color combinations are obtained by a similar subtractive process

lnstead of a set of color primaries, the HSV model uses color descriptions that have a more intuitive appeal to a user. To give a color specification, a user selects a spectral color and the amounts of white and black that are to be added to ohtain differens shades, tints, and tones. Color parameters in this model are hue ( H ) , saturation(S) and value(V)

The three dimensional representation of the HSV model is derived from the RGB cube. If we imagine viewing the cube along the diagonal from the white vertex to the origin(black), we see an outline of the cube that has the hexagon shape shown in fig. The boundary of the hexagon represents the various hues, and it is used as the top of the HSV hexcone. In the hexcone, saturation is measured along a horizontal; axis and value is along a vertical axis through the center of the hexcone.

Hue is represented as an angle about the vertical axis ranging from 0 degree at red through 360 degrees. Vertices of the hexagon are separated by 600 intervals. Yellow is at 600, green at 1200 and cyan opposite e red at H = 1800 complementary colors are 1800 apart 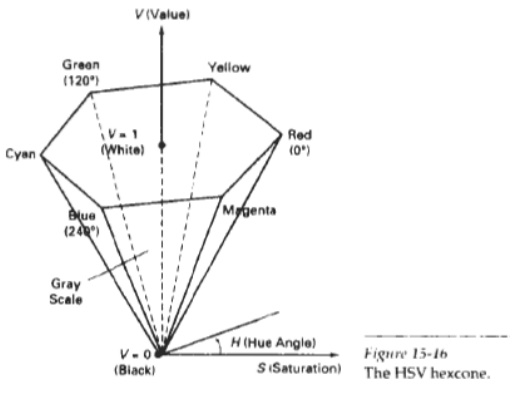 Saturation S varies from 0 to 1. It is represented in this model as the ratio of the purity of a selected hue to its maximum purity at S = 1. A selected hue is said to be one-quarter pure at the value S = 0.25. At S = 0, we have the gray scale.

Value V varies from 0 at the apex of the hexcone to I at the top. The apex represents black. At the top of the hexcone, colors have their maximum intensity. When V = 1 and S = 1, we have the "pure" hues. White is the point at V = 1 andS =o