We can divide the process of the colonialisation of India into three phases a. Phase I Mercantilist Capitalism b. Phase II Industrial Capitalism c. Phase III Financial Capitalism

Towards the close of the 15th century, Portugal became the first European power to establish a trade link with India. Rounding the Cape of Good Hope Vasco da Gama arrived in Calicut in 1498. Soon other European powers joined Portugal in establishing their presence in India. The European powers in India since 16th century are given below: 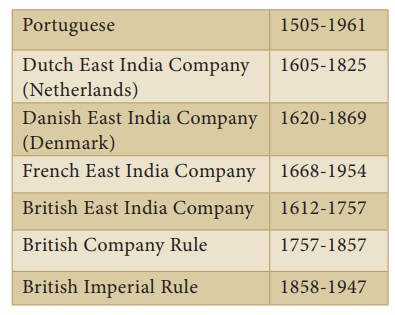 In the rivalry among four major European powers – Portuguese, Dutch, French and English – the English, after three Carnatic Wars, eliminated the French by the end of the eighteenth century. The British conquered all the regional powers, in particular the most potential challengers, the Mysore Sultans and the Marathas, by defeating them in three Anglo-Mysore and three Anglo- Maratha Wars. The conquest of the Gurkhas (1816), the Sindhis (1843) and the Sikhs (1849) enabled them to emerge as a territorial power in India.

The Colonialisation of Indian Economy

At the beginning of the 18th century the East India Company was still a marginal force in India. It relied on concessions from Indian rulers for its trading posts along the coast. But soon it managed to establish strong ties with Indian merchants who sold their textiles and other goods from the interior. Before it gained dominion in India the East India Company carried on a very profitable business selling Indian-made cotton textiles and silks and printed cloth. According to the Indian nationalist economist R.C. Dutt, weaving was the national industry of the people and spinning was the pursuit of millions of women. Indian textiles went to England and other parts of Europe, to China and Japan and Burma and Arabia and Persia and parts of Africa. It was during this period that the textile lobby in Lancashire and Birmingham succeeded in making the Parliament enact a law prohibiting the import of Indian textiles. Those who were found in possession of or dealing in Indian cotton goods were fined 200 pounds.

Mercantilism: Mercantilism refers to a number of prevailing economic theories applied by the state in its effort to attain wealth and power. Spain in the sixteenth century was the richest and most powerful in the world. Spain’s power and wealth were found in the treasure pouring into Spain from its colonies. The more colonies a country had, the richer it would be. In sum, European countries pursued Mercantilism as a kind of national economic policy designed to maximize their trade, especially to maximize the accumulation of gold and silver.

In the 1750s and the early 1760s, Robert Clive gained control of the wealthiest part of the old Mughal Empire. The Company exacted concessions such as exemption of Company goods from transit duties, which even Indian merchants had to pay. After the Battle of Plassey (1757), the Company got 1.2 million pounds out of which Clive himself took 31,500 pounds besides a jagir which provided an annual income of 27,000 pounds. After the Battle of Buxar (1764), the Murshidabad treasury was looted. The Company acquired the Diwani right in 1765 and became the revenue farmer of the Mughal Emperor. 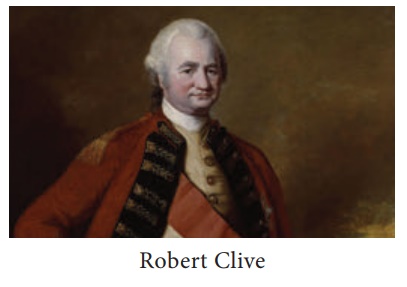 The money looted and carried from India helped to finance the Industrial Revolution in England. After the Industrial Revolution in England, instead of protecting and encouraging industries in India, the East India Company crushed every industry which came in conflict with British industry. The ship-building industry collapsed. Metal workers could not sustain their craft and the manufacture of glass and paper dwindled. India which had been the “Lancashire of the Eastern World” began to lose its position when its cottage industries had to compete with machine industry developed in England. Thrown out of employment, the weavers and other artisans who lived in towns and cities had to return to villages. The agricultural sector, which was already over-crowded, had to support all these unemployed artisans.