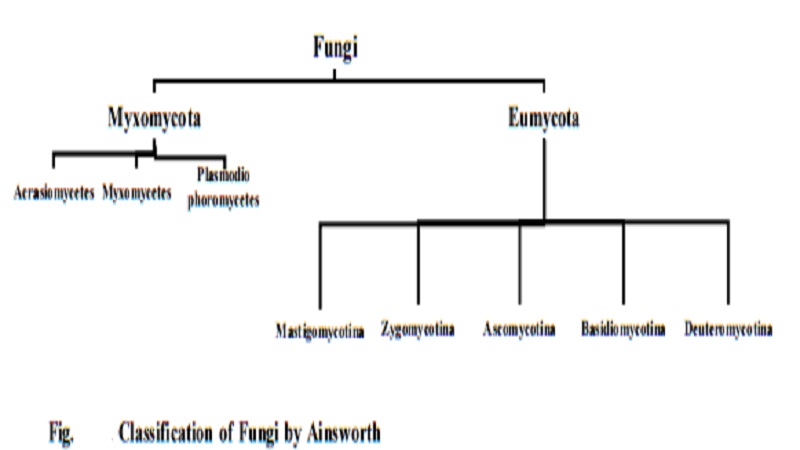 Traditionally fungi have been regarded as plants. At one time fungi were given the status of a class and together with the class algae formed the division Thallophyta of the Plant Kingdom.

Traditionally fungi have been regarded as plants. At one time fungi were given the status of a class and together with the class algae formed the division Thallophyta of the Plant Kingdom. The thallophyta were those plants whose bodies could be described as  thalli. A thallus is a body, often flat, which is not differentiated into true roots, stem and leaves and lack a true vascular system. A modification of the scheme of classification of fungi proposed by Ainsworth(1973) and adopted by Webster(1980) is outlined below.

Division Myxomycota: They lack cell wall and are quite unusual organisms. Possess either a plasmodium, a mass of naked, multinucleate protoplasm, which feeds by ingesting particulate matter and shows amoeboid movement, or pseudoplasmodium, an aggregation of separate amoeboid cells. Both are of a slimy consistency, hence they are also called 'Slime moulds'.

Division Eumycota:  True fungi, all with cell wall. It is customary to recognize five subdivisions under this division. 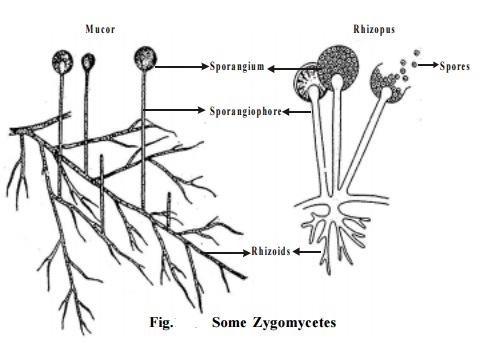 A. Mastigomycotina: These are zoosporic fungi, many are solely aquatic. Three classes are included in this, each characterized by their distinctive type of zoospores.

B . Zygomycotina:  Vegetative  body haplophase. Asexual spores are non-motile spores. Sexual reproduction takes place by the complete fusion of two multi-nucleate gametangia producing a zygospore. Because of this the fungi of the class zygomycetes are also known as conjugation fungi. Cell wall is made up of chitin and chitosan. It includes two classes. The commonblack, bread moulds Rhizopus and Mucor belong to this group. Rhizopus is a very common saprotroph similar in appearance to Mucor, but more widespread.

C. Ascomycotina: Hyphae are septate, vegetative body is haplophase. It has five classes.This subdivision includes forms such as yeasts, brown moulds, green moulds, pink moulds, cup fungi, and edible morels. In this group of fungi asexual reproduction takes place by various types of non-motile spores such as oidia, chlamydospores and conidia. Sexual reproduction takes place by means of gametangial copulation (yeasts). gametangial contact (Penicillium) and by somatogamy (Morchella). The ascomycetes or sac fungi are characterized by the development of spores called ascospores. These ascospores are enclosed in a sac like structure, the ascus. In primitive ascomycetes the asci occur singly. In advanced ascomycetes, groups of asci get aggregated to form campact fruiting bodies called the ascocarps. The ascocarps are of three types. 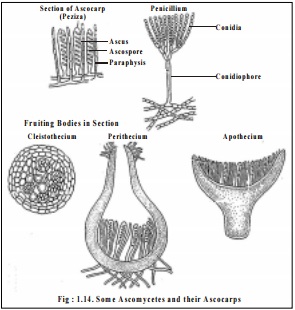 This group got its name from the basidium, the club shaped structure formed at the tip of the reproductive hypha.  Each basidium bears four basidiospores at its tip. Large reproductive  structures  or fruiting     bodies         called basidiocarps are produced in this  group of fungi. Common examples for basidiomycetes include mushrooms, toadstools, puffballs and bracket fungi .

The mycelia of this group are of two types. Primary and secondary. Primary mycelium multiplies by oidia, conidia like spores and pycnidiospores. Distinct sex organs are absent. Fusion occurs between two basidiospores or between two hyphal cells of primary mycelia. Advanced forms of basidiomycetes produce fruiting bodies called basidiocarps. Fruiting bodies vary in size from small microscopic to large ones.

Three classes are included under this. They are the so-called ' Fungi Imperfecti'. It is a group of fungi known only from their asexual (imperfect or anamorphic) or mycelial state. Their sexual (perfect or teleomorphic) states are either unknown or may possibly be lacking altogether.