The increase in acetylcholine caused by cholinester-ase inhibitors affects more than the nicotinic recep-tors of skeletal muscle (Table 12–2). Cholinesterase 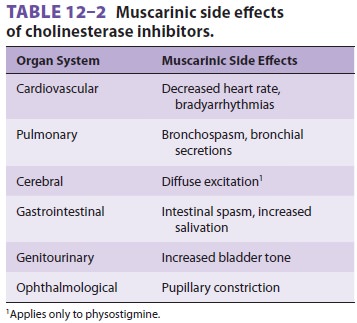 inhibitors can act at cholinergic receptors of several other organ systems, including the cardiovascular and gastrointestinal systems.

Cardiovascular receptors—The predominantmuscarinic effect on the heart is bradycardia that can progress to sinus arrest.

Cerebral receptors—Physostigmine is acholinesterase inhibitor that crosses the blood– brain barrier and can cause diffuse activation of the electroencephalogram by stimulating muscarinic and nicotinic receptors within the central nervous system. Inactivation of nicotinic acetylcholine receptors in the central nervous system may play a role in the action of general anesthetics. Unlike physostigmine, cholinesterase inhibitors used to reverse neuromuscular blockers do not cross the blood–brain barrier.

Gastrointestinal receptors—Muscarinicstimulation increases peristaltic activity (esophageal, gastric, and intestinal) and glandular secretions (eg, salivary). Postoperative nausea, vomiting, and fecal incontinence have been attributed to the use of cholinesterase inhibitors.

Unwanted muscarinic side effects are mini-mized by prior or concomitant administration of anticholinergic medications, such as atropine sulfate or glycopyrrolate. The duration of action is similar among the cholinesterase inhibitors. Clearance is due to both hepatic metabolism (25% to 50%) and renal excretion (50% to 75%). Thus, any pro-longation of action of a nondepolarizing muscle relaxant from renal or hepatic insufficiency will probably be accompanied by a corresponding increase in the duration of action of a cholinesterase inhibitor.

A reversal agent should be routinely given to patients who have received nondepolarizingmuscle relaxants unless full reversal can be demon-strated or the postoperative plan includes continued intubation and ventilation. In the latter situation, adequate sedation must also be provided.

A peripheral nerve stimulator should also be used to monitor the progress and confirm the ade-quacy of reversal. In general, the higher the fre-quency of stimulation, the greater the sensitivity ofthe test (100-Hz tetany > 50-Hz tetany or TOF > single-twitch height). Clinical signs of adequate reversal also vary in sensitivity (sustained head lift > inspiratory force > vital capacity > tidal volume). Therefore, the suggested end points of recov-ery are sustained tetanus for 5 sec in responseto a 100-Hz stimulus in anesthetized patients or sus-tained head or leg lift in awake patients. Newer quantitative methods for assessing recovery from neuromuscular blockade, such as acceleromyogra-phy, may further reduce the incidence of residual postoperative neuromuscular paralysis.