Capillaries carry blood from arterioles to venules. Their walls are only one cell in thickness; capillaries are actually the extension of the endothelium, the simple squamous lining, of arteries and veins (see Fig. 13–1). Some tissues do not have capillaries; these are the epidermis, cartilage, and the lens and cornea of the eye.

Most tissues, however, have extensive capillary networks. The quantity or volume of capillary networks in an organ reflects the metabolic activity of the organ. The functioning of the kidneys, for example, depends upon a good blood supply. Fig. 18–2 shows a vascular cast of a kidney; you can see how dense the vessels are, most of which are capillaries. In contrast, a tendon such as the Achilles tendon at the heel or the patellar tendon at the knee would have far fewer vessels, because fibrous connective tissue is far less metabolically active. 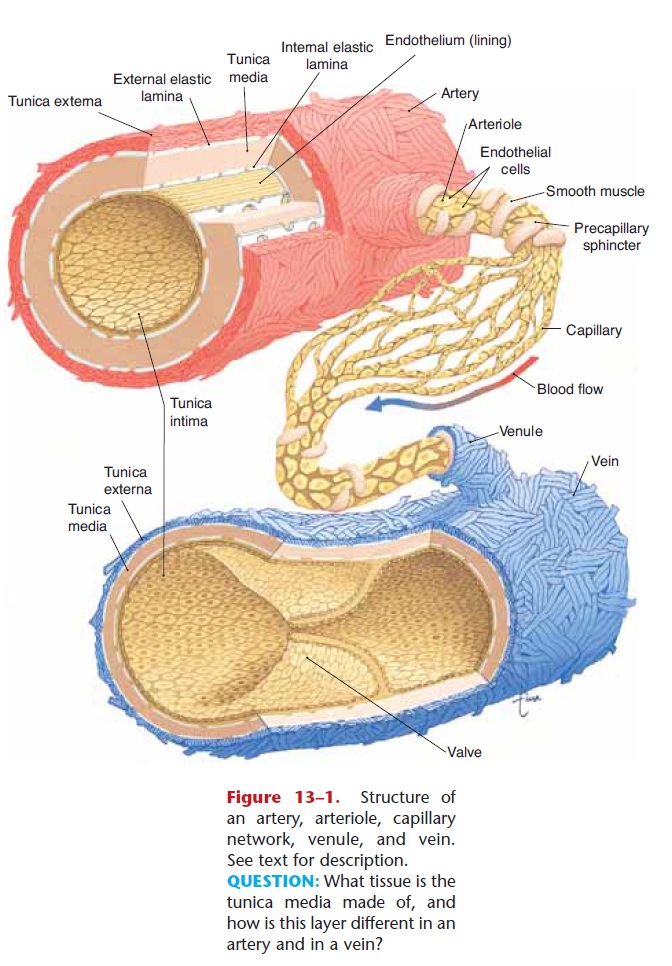 Some organs have another type of capillary called sinusoids, which are larger and more permeable than are other capillaries. The permeability of sinusoids permits large substances such as proteins and blood cells to enter or leave the blood. Sinusoids are found in the red bone marrow and spleen, where blood cells enter or leave the blood, and in organs such as the liver and pituitary gland, which produce and secrete proteins into the blood.

Figure 13–2. Exchanges between blood in a systemic capillary and the surrounding tis-sue fluid. Arrows depict the direction of movement. Filtration takes place at the arterial end of the capillary. Osmosis takes place at the venous end. Gases are exchanged by diffusion. QUESTION: Of all the pressures shown here, which one is the highest, and what process does it bring about?

Blood pressure decreases as blood reaches the venous end of capillaries, but notice that proteins such as albumin have remained in the blood. Albumin contributes to the colloid osmotic pressure (COP) of blood; this is an “attracting” pressure, a “pulling” rather than a “pushing” pressure. At the venous end of capillaries, the presence of albumin in the blood pulls tissue fluid into the capillaries, which also brings into the blood the waste products produced by cells. The tissue fluid that returns to the blood also helps maintain normal blood volume and blood pressure.