As already pointed out the chroma signal is susceptible to phase shift errors both at the transmitter and in the transmission path.

As already pointed out the chroma signal is susceptible to phase shift errors both at the transmitter and in the transmission path.

This effect is sometimes called ‘differential phase error’ and its presence results in changes of hue in the reproduced picture. This actually results from a phase shift of the colour sideband frequencies with respect to colour burst phase.

The PAL system has a built-in protection against such errors provided the picture content remains almost the same from line to line.

This is illustrated by phasor diagrams. Figure  (a) shows phasors representing particular

U and V chroma amplitudes for two consecutive lines of a field. Since there is no phase

error the resultant phasor (R) has the same amplitude on both the lines.

Detection along the U axis in one synchronous detector and along the V axis in another, accompanied by sign switching in the latter case yields the required U and V colour signals. Thus correct hues are produced in the picture.

Now suppose that during transmission the phasor R suffers a phase shift by an angle δ. As shown in Fig (b) (i), the corresponding changes in the magnitude of U and V would mean a permanent hue error in the NTSC system.

However, in the PAL system ( (b) (ii)) the resultant phasor at the demodulator will swing between R 1 and R 2 as illustrated in Fig. (b) (iii). It is now obvious that the phase error would cancel out if the two lines are displayed at the same time. In actual practice however, the lines are scanned in sequence and not simultaneously.

The colours produced by two successive lines, therefore, will be slightly on either side of the actual hue.

Since the lines are scanned at a very fast rate the eye due to persistence of vision will perceive a colour that lies between the two produced by R 1 and R 2 respectively.

Thus the colour seen would more or less be the actual colour. It is here, where the PAL system claims superiority over the NTSC system. 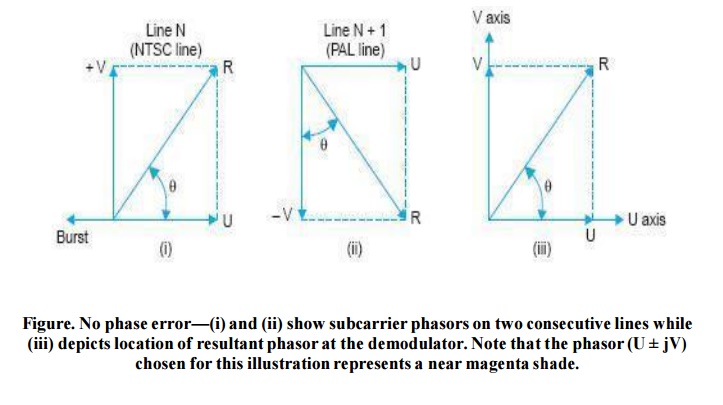 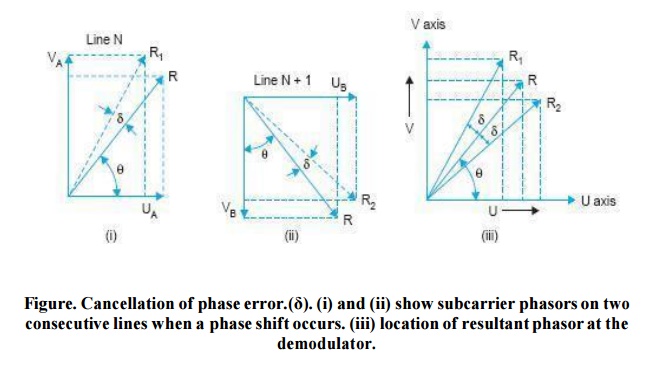