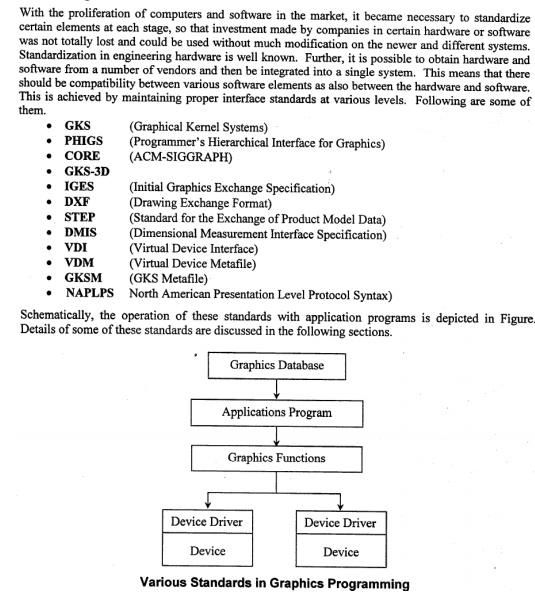 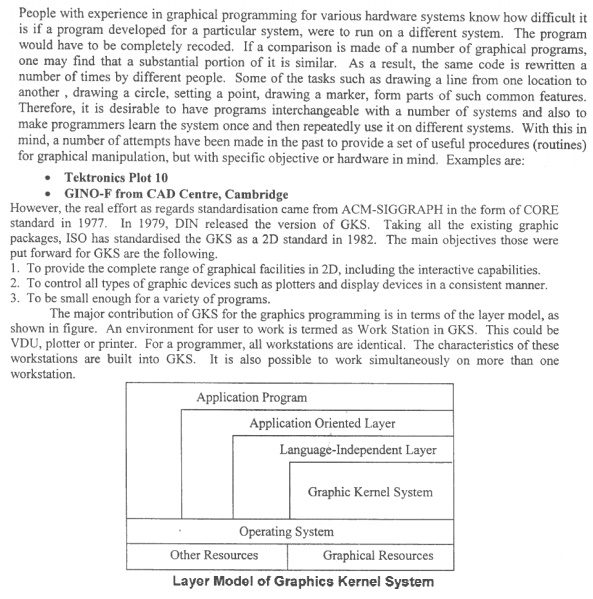 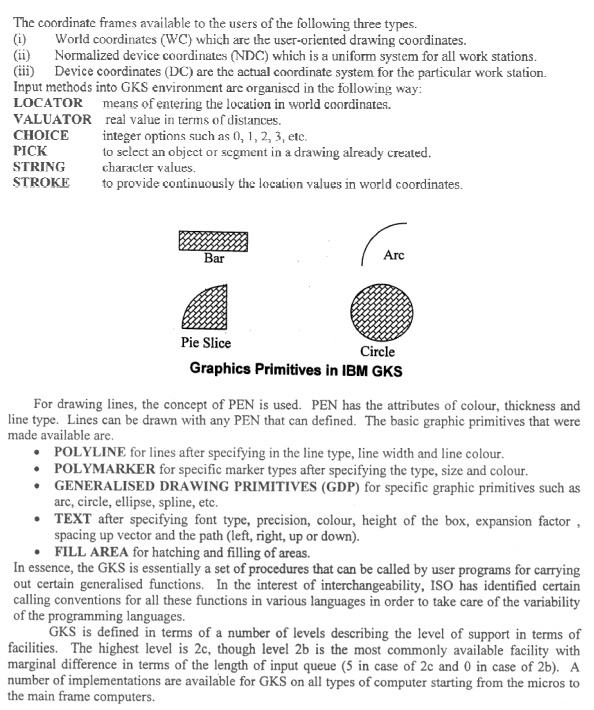 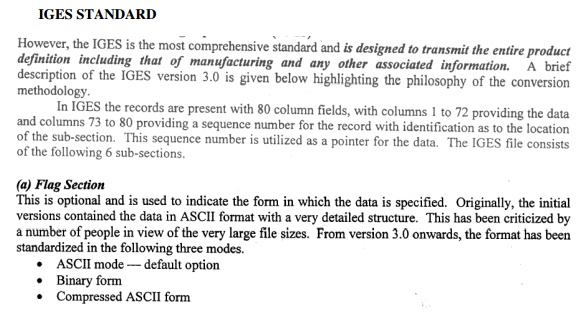 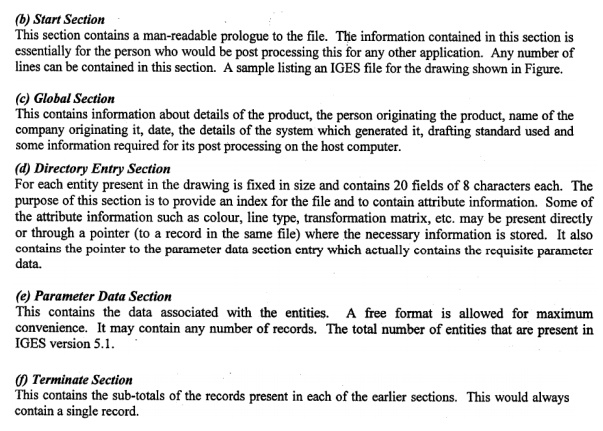 STEP (Standard for the Exchange of Product model Data)

•         It contains constructs for defining data types and structures, but not fo r processing data

•         EXPRESS describes geometry and other information in a standard, unambiguous way 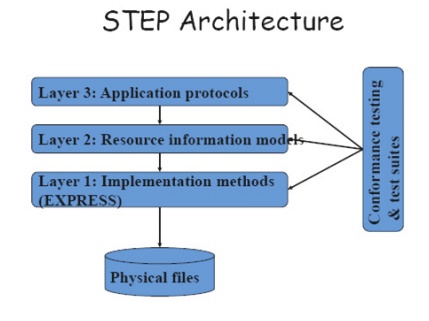 •STEP has been un der development for many years, and will continue for many more

•Many others are under development 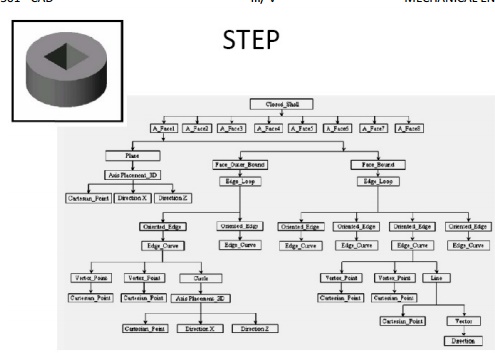 •Developed by US Department of Defense

iii.     All graphical elements can be specified in a textual source file that can be compiled into a binary file or one of two text representations

The API is defined as a number of functions which may be called by the client program, alongside a number of named integer constants (for example, the constant G L_TEXTURE_2D, which corresponds to the decimal number 3553). Although the function definitions are superficially similar to those of the C programming language, they are language-independent. As such, OpenGL has many language bindings, some of the most noteworthy being the JavaScriptbinding WebGL (API, based on OpenGL ES 2.0, for 3D rendering from within aweb browser); the C bindings WGL, GLX and CGL; the C binding provided by iOS; and the Java and C bindings provi ded by Android.

In addition to being la nguage-independent, OpenGL is also platform-independent. The specification says nothing on the subject of obtaining, and managing, an OpenGL context, leaving this as a detail of the underlying windowing system. For the same reason, OpenGL is purely concerned with rendering, providing no APIs related to input, audio, or windowing. 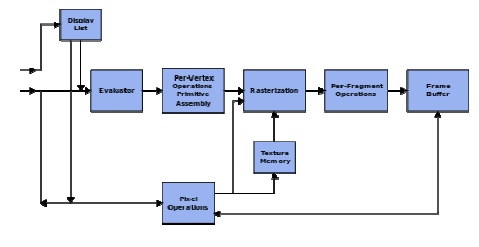 As you might have observed from the simple program in the previous section, OpenGL commands use the prefix gl and initial capital letters for each word making up the command name (recall glClearColor(), for example). Similarly, OpenGL defined constants begin with GL_, use all capital letters, and use underscores to separate words (like GL_COLOR_BUFFER_BIT).

You might also have noticed some seemingly extraneous letters appended to some command names (for example, the 3f in glColor3f() and glVertex3f()). It's true that the Color part of the command name glColor3f() is enough to define the command as one that sets the current color. However, more than one such command has been defined so that you can use different types of arguments. In particular, the 3 part of the suffix indicates that three arguments are given; another version of the Color command takes four arguments. The f part of the suffix indicates that the arguments are floating-point numbers. Having different formats allows OpenGL to accept the user's data in his or her own data format.

Some OpenGL commands accept as many as 8 different data types for their arguments. The letters used as suffixes to specify these data types for ISO C implementations of OpenGL are shown in Table 1-1, along with the corresponding OpenGL type definitions. The particular implementation of OpenGL that you're using might not follow this scheme exactly; an implementation in C++ or Ada, for example, wouldn't need to. 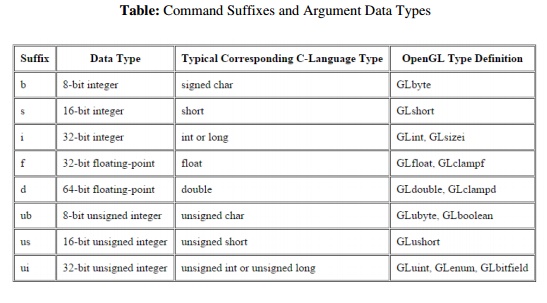 OpenGL provides a powerful but primitive set of rendering commands, and all higher-level drawing must be done in terms of these commands. Also, OpenGL programs have to use the underlying mechanisms of the windowing system. A number of libraries exist to allow you to simplify your programming tasks, including the following:

•       The OpenGL Utility Library (GLU) contains several routines that use lower-level OpenGL commands to perform such tasks as setting up matrices for specific viewing orientations and projections, performing polygon tessellation, and rendering surfaces. This library is provided as part of every OpenGL implementation. Portions of the GLU are described in the OpenGL Reference Manual. The more useful GLU routines are described in this guide, where they're relevant to the topic being discussed, such as in all of Chapter 11 and in the section "The GLU NURBS Interface". GLU routines use the prefix glu.

•       The OpenGL Utility Toolkit (GLUT) is a window system-independent toolkit, written by Mark Kilgard, to hide the complexities of differing window system APIs. GLUT is the subject of the next section, and it's described in more detail in Mark Kilgard's book OpenGL Programming for the X Window System (ISBN 0-201-48359-9). GLUT routines use the prefix glut. "How to Obtain the Sample Code" in the Preface describes how to obtain the source code for GLUT, using ftp.