The Graphical Kernel System (GKS) was the first ISO standard for computer graphics in low-level, established in 1977.

The Graphical Kernel System (GKS) was the first ISO standard for computer graphics in low-level, established in 1977. GKS offers a group of drawing aspects for 2D vector graphics appropriate for mapping and related duties. The calls are defined to be moveable across various programming languages, graphics hardware, so that applications noted to use GKS will be willingly portable to different devices and platforms. 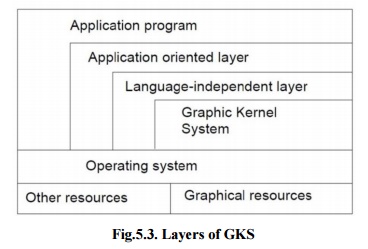 The main uses of the GKS standard are:

·        To give for portability of application graphics programs.

·        To assist in the learning of graphics systems by application programmers.

·        To offer strategy for manufacturers in relating practical graphics capabilities.

i)       A casual exhibition of the substances of the standard which contains such things as how text is placed, how polygonal zones are to be filled, and so onward.

iii)  Language bindings are an execution of the abstract functions explained in (ii). in a explicit computer language such as C.

GKS arrange its functionality into twelve functional stages, based on the complexity of the graphical input and output. There are four stages of output (m, 0, 1, 2) and three stages of input (A, B, C). NCAR GKS has a complete execution of the GKS C bindings at level 0 A.

GKS is based on a number of elements that may be drawn in an object know as graphical primitives. The fundamental set of primitives has the word names POLYLINE, POLYMARKER, FILLAREA, TEXT and CELLARRAY, even though a few implementations widen this basic set.

command takes an array of X-Y coordinates and creates line segments joining them. The elements that organize the look of a ‘POLYLINE’re (Figa.5.3): 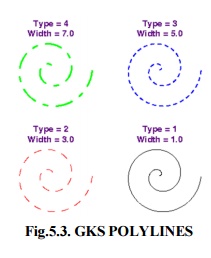 The GKS OLYMARKER‘P’function permits to draw symbols of marker centered at coordinate points. The features that control the look of ‘POLYMARKERS’are (Fig.5.4.): 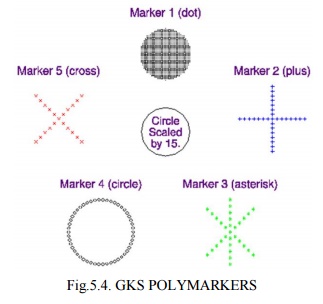 The GKS ILL‘FAREA’function permits to denote a polygonal shape of a zone to be filled with various interior shapes. The features that control the look of fill areas are (Fig.5.5.): 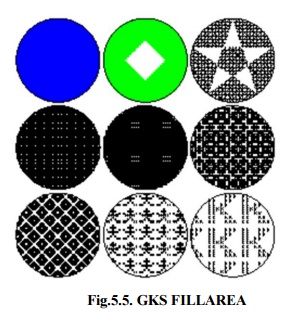 The GKS TEXT function permits to sketch a text string at a specified coordinate place. The features that control the look of text are:

·  Text font and precision  : text font should be used for the characters

·  Character spacing           : additional white space should be inserted between characters 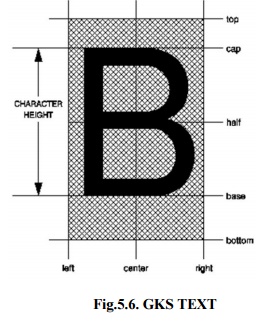