Burns: Classify burns on the basis of the amount of skin damage produced 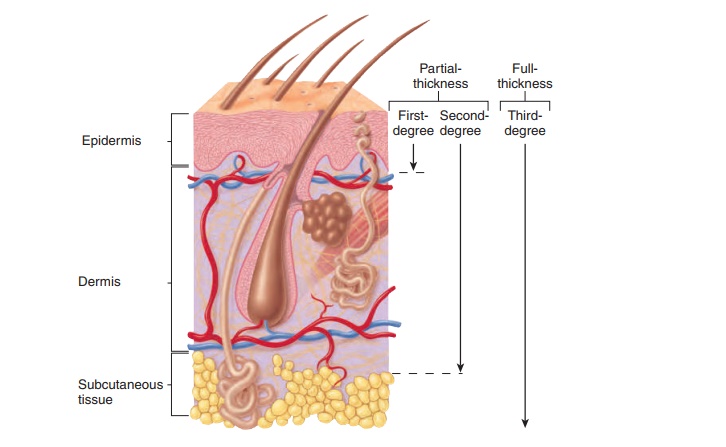 Classify burns on the basis of the amount of skin damage produced.

Classify burns on the basis of the amount of skin damage produced.

A burn is injury to a tissue caused by heat, cold, friction, chemi-cals, electricity, or radiation. Burns are classified according to their depth (figure 5.9). In partial-thickness burns, part of the stratum basale remains viable, and regeneration of the epidermis occurs from within the burn area, as well as from the edges of the burn. Partial-thickness burns are divided into first- and second degree burns 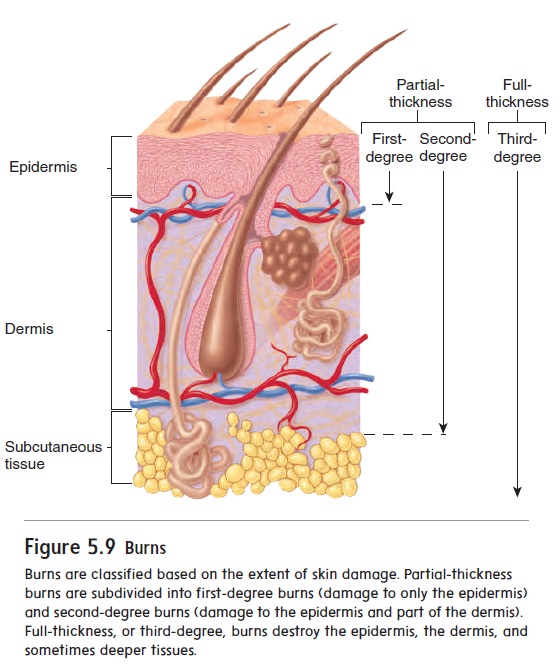 First-degree burns involve only the epidermis and are redand painful. Slight edema (e-dē′mă), or swelling, may be present. They can be caused by sunburn or brief exposure to very hot or very cold objects, and they heal without scarring in about a week.

Second-degree burns damage both the epidermis and the dermis. If dermal damage is minimal, symptoms include redness, pain, edema, and blisters. Healing takes about 2 weeks, and no scarring results. However, if the burn goes deep into the dermis, the wound appears red, tan, or white; can take several months to heal; and might scar. In all second-degree burns, the epider-mis regenerates from epithelial tissue in hair follicles and sweatglands, as well as from the edges of the wound.

Deep partial-thickness and full-thickness burns take a long time to heal, and they form scar tissue with disfiguring and debili-tating wound contracture . To prevent these com-plications and to speed healing, skin grafts are often performed. In a procedure called a split skin graft, the epidermis and part of Burns are classified based on the extent of skin damage.

the dermis are removed from another part of the body and placed over the burn. Interstitial fluid from the burn nourishes the graft until blood vessels can grow into the graft and supply it with nourishment. Meanwhile, the donor tissue produces new epider-mis from epithelial tissue in the hair follicles and sweat glands in the same manner as in superficial second-degree burns.

When it is not possible or practical to move skin from one part of the body to a burn site, physicians sometimes use artificial skin or grafts from human cadavers. However, these techniques are often unsatisfactory because the body’s immune system rec-ognizes the graft as a foreign substance and rejects it. A solution to this problem is to grow some of the burn victim’s own skin in the laboratory. A piece of healthy skin from the burn victim is removed and placed in a flask with nutrients and hormones that stimulate rapid growth. The new skin that results consists only of epidermis and does not contain glands or hair.