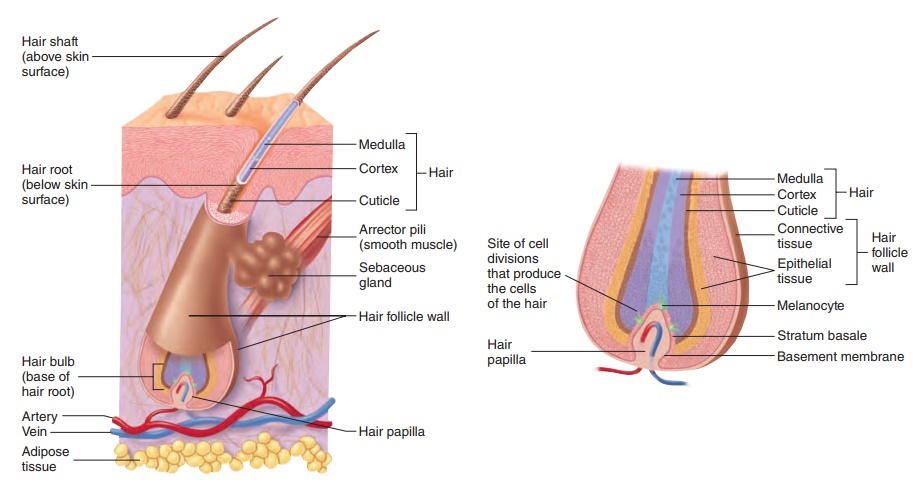 A.Describe the structure of a hair, and discuss the phases ofhair growth. B. Name the glands of the skin, and describe the secretionsthey produce. C.Describe the parts of a nail, and explain how nails grow.

The accessory skin structures are hair, glands, and nails.

In humans, hair is found everywhere on the skin, except on the palms, the soles, the lips, the nipples, parts of the genitalia, and the distal segments of the fingers and toes.

Each hair arises from a hair follicle, an extension of the epidermis that originates deep in the dermis (figure 5.5a). The shaft of the hair protrudes above the surface of the skin, whereasthe root and hair bulbare below the surface. A hair has a hard cortex, which surrounds a softer center, the medulla (me-dool′ă).The cortex is covered by the cuticle (kū′ti-kl; skin), a single layer of overlapping cells that holds the hair in the hair follicle. The hair follicle can play an important role in repair of the skin. If the surface epidermis is damaged, the epithelial cells within the hair follicle can divide and serve as a source of new epithelial cells.

within the hair bulb. These cells, like the cells of the stratum basale in the skin, divide and undergo keratinization. The hair grows longer as these cells are added to the base of the hair within the hair bulb. Thus, the hair root and shaft consist of columns of dead keratinized epithelial cells. During the resting stage, growth stops and the hair is held in the hair follicle. When the next growth stage begins, a new hair is formed and the old hair falls out. The duration of each stage depends on the individual hair. Eyelashes grow for about 30 days and rest for 105 days, whereas scalp hairs grow for 3 years and rest for 1–2 years. The loss of hair normally means that the hair is being replaced because the old hair falls out of the hair follicle when the new hair begins to grow. In some men, however, a permanent loss of hair results in “pattern baldness.” Although many of the hair fol- licles are lost, some remain and produce a very short, transparent hair, which for practical purposes is invisible. These changes occur when male sex hormones act on the hair follicles of men who have the genetic predisposition for pattern baldness.

Hair color is determined by varying amounts and types of mel- anin. The production and distribution of melanin by melanocytes 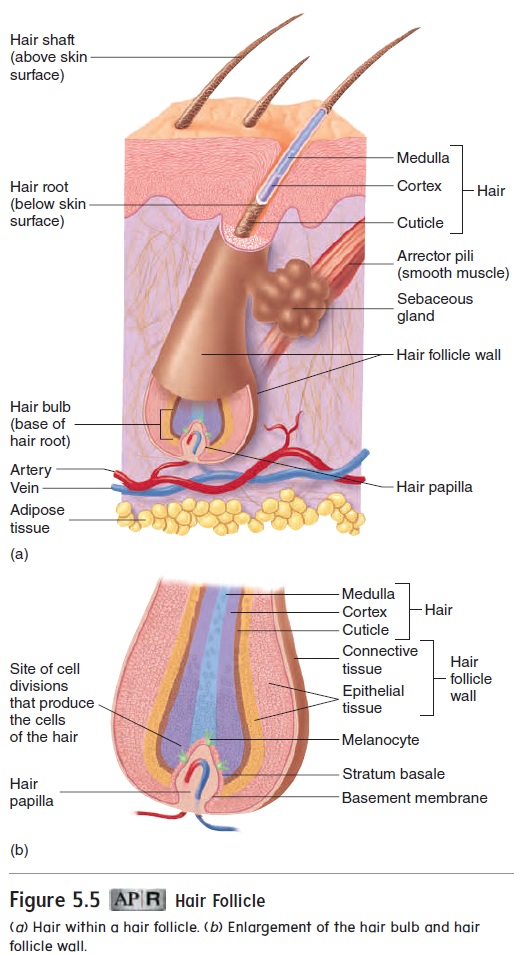 occurs in the hair bulb by the same method as in the skin. With age, the amount of melanin in hair can decrease, causing the hair color to become faded, or the hair can contain no melanin and be white. Gray hair is usually a mixture of unfaded, faded, and white hairs.

Associated with each hair follicle are smooth muscle cells called the arrector (ă-rek′tōr; that which raises) pili (pı̄′li; hair) (see figure 5.5a). Contraction of the arrector pili causes the hair to become more perpendicular to the skin’s surface, or to “stand on end,” and it produces a raised area of skin called a “goose bump.”

The major glands of the skin are the sebaceous (s̄e -b̄a ′sh̆u s) glands and the sweat glands (figure 5.6). Sebaceous glands aresimple, branched acinar glands . Most are con-nected by a duct to the superficial part of a hair follicle. They produce sebum, an oily, white substance rich in lipids. The sebum is released by holocrine secretion  and lubricates the hair and the surface of the skin, which prevents drying and protects against some bacteria. 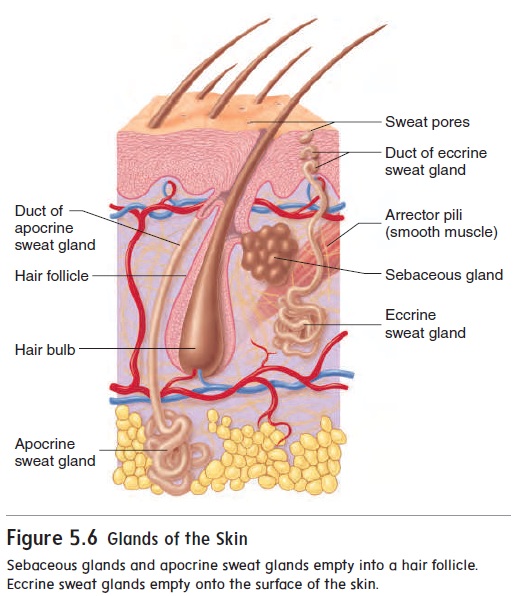 There are two kinds of sweat glands: eccrine and apocrine. Eccrine (ek′rin) sweat glands are simple, coiled, tubular glandsand release sweat by merocrine secretion. Eccrine glands are located in almost every part of the skin but most numerous in the palms and soles. They produce a secretion that is mostly water with a few salts. Eccrine sweat glands have ducts that open onto the surface of the skin through sweat pores. When the body temperature starts to rise above normal levels, the sweat glands produce sweat, which evaporates and cools the body. Sweat can also be released in the palms, soles, armpits, and other places because of emotional stress. Emotional sweating is used in lie detector (polygraph) tests because sweat gland activity usually increases when a person is nervous, such as when the person tells a lie. Such tests can detect even small amounts of sweat because the salt solution conducts electricity and lowers the electrical resistance of the skin.

Apocrine (ap′ō-krin) sweat glands are simple, coiled,tubular glands that produce a thick secretion rich in organic sub-stances. These substances are released primarily by merocrine secretion, though some glands demonstrate holocrine secretion. They open into hair follicles, but only in the armpits and genita-lia. Apocrine sweat glands become active at puberty because of the influence of sex hormones. The organic secretion, which is essentially odorless when released, is quickly broken down by bacteria into substances responsible for what is commonly known as body odor.

The nail is a thin plate, consisting of layers of dead stratum cor-neum cells that contain a very hard type of keratin. The visible part of the nail is the nail body, and the part of the nail covered by skin is thenail root (figure 5.7). The cuticle, or eponychium (ep-̄o -nik′ ̄e -̆u m), is stratum corneum that extends onto the nail body. The nail root extends distally from the nail matrix. The nail also attaches to the underlying nail bed, which is located distal