The salient behavioral disturbance of bulimia nervosa is the occurrence of episodes of binge-eating.

The salient behavioral disturbance of bulimia nervosa is the occurrence of episodes of binge-eating. During these episodes, the individual consumes an amount of food that is unusually large considering the circumstances under which it was eaten. Although this is a useful definition and conceptu-ally reasonably clear, it can be operationally difficult to distin-guish normal overeating from a small episode of binge-eating. Indeed, the available data do not suggest that there is a sharp dividing line between the size of binge-eating episodes and the size of other meals. On the other hand, while the border between normal and abnormal eating may not be a sharp one, both patients’ reports and laboratory studies of eating behavior clearly indicate that, when binge-eating, patients with bulimia nervosa do indeed consume larger than normal amounts of food.

Episodes of binge-eating are associated, by definition, with a sense of loss of control. Once the eating has begun, the in-dividual feels unable to stop until an excessive amount has been consumed. This loss of control is only subjective, in that most individuals with bulimia nervosa will abruptly stop eating in the midst of a binge episode if interrupted, for example, by the unex-pected arrival of a roommate.

After overeating, individuals with bulimia nervosa en-gage in some form of inappropriate behavior in an attempt to avoid weight gain. Most patients who present to eating disorders clinics with this syndrome report self-induced vomiting or the abuse of laxatives. Other methods include misusing diuretics, fasting for long periods and exercising extensively after eating binges.

The DSM-IV-TR criteria require that the overeating epi-sodes and the compensatory behaviors both occur at least twice a week for 3 months to merit a diagnosis of bulimia nervosa. This criterion, although useful in preventing the diagnostic label from being applied to individuals who only rarely have difficulty with binge-eating, is clearly an arbitrary one.

Criterion D in the DSM-IV-TR definition of bulimia ner-vosa requires that individuals with bulimia nervosa exhibit an over concern with body shape and weight. That is, they tend to base much of their self-esteem on how much they weigh and how slim they look.

Soon after bulimia nervosa was recognized as a distinct dis-order, surveys indicated that many young women reported problems with binge-eating, and it was suggested that the syn-drome of bulimia nervosa was occurring in epidemic propor-tions. Later careful studies have found that although binge-eating is frequent, the full-blown disorder of bulimia nervosa is much less common, probably affecting 1 to 2% of young women in the USA. Although sufficient research data do not exist to pinpoint specific epidemiological trends in the occur-rence of bulimia nervosa, research suggests that women born after 1960 have a higher risk for the illness than those born before 1960.

Evidence suggests an important role of sociocultural in-fluences in the development of bulimia nervosa. For example, the frequency of the disorder has been reported to be increasing among immigrants to the USA and UK from nonWestern coun-tries (Hsu, 1990). Although the rate of the disorder appears to be lower among nonwhite and nonWestern cultures, the frequency of bulimia nervosa has been reported to be increasing among these groups, especially among the higher socioeconomic classes. Sur-prisingly, several epidemiological and clinical studies in the USA found no relationship between bulimia nervosa and social class (Kendler et al., 1991).

Among patients with bulimia nervosa who are seen at eat-ing disorders clinics, there is an increased frequency of anxiety and mood disorders, especially major depressive disorder and dysthymic disorder, of drug and alcohol abuse, and of personal-ity disorders. It is not certain whether this comorbidity is also observed in community samples or whether it is a characteristic of individuals who seek treatment.

As in the case of anorexia nervosa, the etiology of bulimia ner-vosa is uncertain. Several factors clearly predispose individuals to the development of bulimia nervosa, including being an ado-lescent girl or young adult woman. A personal or family history of obesity and of mood disturbance also appears to increase risk. Twin studies have suggested that inherited factors are related to the risk of developing bulimia nervosa, but what these factors are and how they operate are unclear.

Many of the same psychosocial factors related to the de-velopment of anorexia nervosa are also applicable to bulimia ner-vosa, including the influence of cultural esthetic ideals of thinness and physical fitness. Similarly, bulimia nervosa primarily affects women; the ratio of men to women is approximately 1 : 10. It also 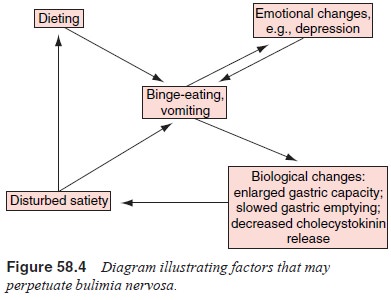 Although not proven, it seems likely that several fac-tors serve to perpetuate the binge-eating once it has begun (Figure 58.4 First, most individuals with bulimia nervosa, be-cause of both their concern regarding weight and their worry about the effect of the binge-eating, attempt to restrict their food intake when they are not binge-eating. The psychological and physiological restraint that is thereby entailed presumably makes additional binge-eating more likely. Secondly, even if mood disturbance is not present at the outset, individuals be-come distressed about their inability to control their eating, and the resultant lowering of self-esteem contributes to dis-turbances of mood and to a reduced ability to control impulses to overeat. In addition, cognitive–behavioral theories empha-size the role of rigid rules regarding food and eating, and the distorted and dysfunctional thoughts that are similar to those seen in anorexia nervosa. Interpersonal theories also impli-cate interpersonal stressors as a primary factor in triggering binge-eating. There is no evidence to suggest that a particular personality structure is characteristic of women with bulimia nervosa.

There are also indications that bulimia nervosa is accom-panied by physiological disturbances that disrupt the develop-ment of satiety during a meal and therefore increase the likeli-hood of binge-eating. These disturbances include an enlarged stomach capacity, a delay in stomach emptying and a reduction in the release of cholecystokinin, a peptide hormone secreted by the small intestine during a meal that normally plays a role in terminating eating behavior. All these abnormalities appear to predispose the individual to overeat and therefore to perpetuate the cycle of binge-eating.

In a small fraction of individuals, bulimia nervosa is associated with the development of fluid and electrolyte abnormalities that result from the self-induced vomiting or the misuse of laxatives or diuretics. The most common electrolyte disturbances are hy-pokalemia, hyponatremia and hypochloremia. Patients who lose substantial amounts of stomach acid through vomiting may be-come slightly alkalotic; those who abuse laxatives may become slightly acidotic.

There is an increased frequency of menstrual disturbances such as oligomenorrhea among women with bulimia nervosa. Sev-eral studies suggest that the hypothalamic–pituitary–gonadal axis is subject to the same type of disruption as is seen in anorexia ner-vosa but that the abnormalities are much less frequent and severe.

Patients who induce vomiting for many years may develop dental erosion, especially of the upper front teeth (Figure 58.5). The mechanism appears to be that stomach acid softens the enamel, which in time gradually disappears so that the teeth chip more easily and can become reduced in size. Some patients de-velop painless salivary gland enlargement, which is thought to represent hypertrophy resulting from the repeated episodes of binge-eating and vomiting. The serum level of amylase is some-times mildly elevated in patients with bulimia nervosa because of increased amounts of salivary amylase. 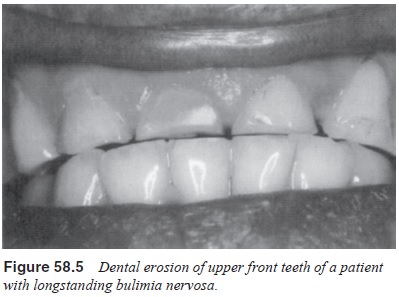 Most patients with bulimia nervosa have surprisingly few gastrointestinal abnormalities. As indicated earlier, it appears that the disorder is associated with an enlarged gastric capacity and delayed gastric emptying, but these abnormalities are not so severe as to be detectable on routine clinical examination. Poten-tially life-threatening complications such as an esophageal tear or gastric rupture occur, but fortunately rarely.

The longstanding use of syrup of ipecac to induce vomit-ing can lead to absorption of some of the alkaloids and to perma-nent damage to nerve and muscle.