Bulimia nervosa is not difficult to recognize if a full history is available.

Bulimia nervosa is not difficult to recognize if a full history is available. The binge-eating/purging type of anorexia nervosa has much in common with bulimia nervosa but is distinguished by the characteristic low body weight and, in women, amenorrhea. Some individuals with atypical forms of depression overeat when de-pressed; if the overeating meets the definition of a binge described previously (i.e., a large amount of food is consumed with a sense of loss of control) and if the binge-eating is followed by inappro-priate compensatory behavior, occurs sufficiently frequently and is associated with over concern regarding body shape and weight, an additional diagnosis of bulimia nervosa may be warranted. Some individuals become nauseated and vomit when upset; this and similar problems are probably not closely related to bulimia nervosa and should be viewed as a somatoform disorder.

Many individuals who believe they have bulimia nervosa have a symptom pattern that fails to meet full diagnostic crite-ria because the frequency of their binge-eating is less than twice a week or because what they view as a binge does not contain an abnormally large amount of food. Individuals with these characteristics fall into the broad and heterogeneous category of atypical eating disorders. Binge-eating disorder, a category currently included in the DSM-IV appendix B for categories that need additional research, is characterized by recurrent binge-eating similar to that seen in bulimia nervosa but without the regular occurrence of inappro-priate compensatory behavior.

Over time, the symptoms of bulimia nervosa tend to improve although a substantial fraction of individuals continue to engage in binge-eating and purging. On the other hand, some controlled clinical trials have reported that structured forms of psychother-apy have the potential to yield substantial and sustained recovery in a significant fraction of patients who complete treatment. It is not clear what factors are most predictive of good outcome, but those individuals who cease binge-eating and purging com-pletely during treatment are least likely to relapse.

The goals of the treatment of bulimia nervosa are straightfor-ward. The binge-eating and inappropriate compensatory behav-iors should cease and self-esteem should become more appropri-ately based on factors other than shape and weight.

The power struggles that often complicate the treatment proc-ess in anorexia nervosa occur much less frequently in the treat-ment of patients with bulimia nervosa. This is largely because the critical behavioral disturbances, binge-eating and purging, are less egosyntonic and are more distressing to these patients. Most bulimia nervosa patients who pursue treatment agree with the primary treatment goals and wish to give up the core behavioral features of their illness. 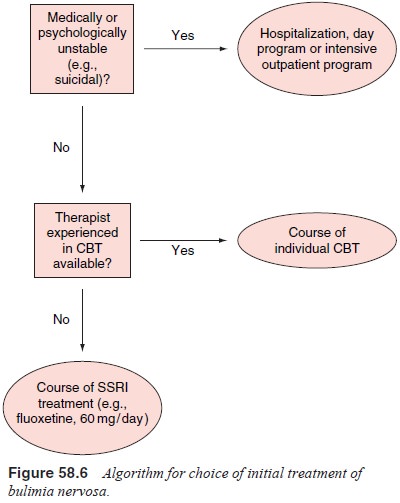 The other commonly used mode of treatment that has been examined in bulimia nervosa is the use of antidepressant medica-tion. This intervention was initially prompted by the high rates of depression among patients with bulimia nervosa and has now been tested in more than a dozen double-blind, placebo-control-led studies using a wide variety of antidepressant medications. Active medication has been consistently found to be superior to placebo, and although there have been no large “head-to-head” comparisons between different antidepressants, most antide-pressants appear to possess roughly similar antibulimic potency. Fluoxetine at a dose of 60 mg/day is favored by many investiga-tors because it has been studied in several large trials and ap-pears to be at least as effective as, and better tolerated than, mostother alternatives. It is notable that it has not been possible to link the effectiveness of antidepressant treatment for bulimia nervosa to the pretreatment level of depression. Depressed and nonde-pressed patients with bulimia nervosa respond equally well in terms of their eating behavior to antidepressant medication.

A major factor influencing the treatment of bulimia nervosa is the presence of other significant psychiatric or medical illness. For example, it can be difficult for individuals who are currently abusing drugs or alcohol to use the treatment methods described, and many psychiatrists suggest that the substance abuse needs to be addressed before the eating disorder can be effectively treated. Other examples include the treatment of individuals with bulimia nervosa and serious personality disturbance and those with insu-lin-dependent diabetes mellitus who “purge” by omitting insulin doses. In treating such individuals, the psychiatrist must decide which of the multiple problems must be first addressed and may elect to tolerate a significant level of eating disorder to confront more pressing disturbances

Although psychotherapy and antidepressant medication are effective interventions for many patients with bulimia nervosa, some individuals have little or no response. There is no clearly es-tablished algorithm for the treatment of such refractory patients. Alternative interventions that may prove useful include other forms of psychotherapy and other medications such as opiate an-tagonists and the serotonin agonist fenfluramine. Hospitalization should also be considered as a way to normalize eating behavior, at least temporarily, and perhaps to initiate a more effective out-patient treatment