A buffer may be defined as a solution which resists the change in pH that will occur on addition of small quantities of acid or base to the solution.

A buffer may be defined as a solution which resists the change in pH that will occur on addition of small quantities of acid or base to the solution. Buffers are mixtures of weak acid and its salt or weak base and its salt. The pH of the solution is defined as the negative logarithm of hydrogen ion concentration. The pH of buffers are determined by Henderson Haselbach equation, which is derived as follows

Let us consider a weak acid that ionizes as follows 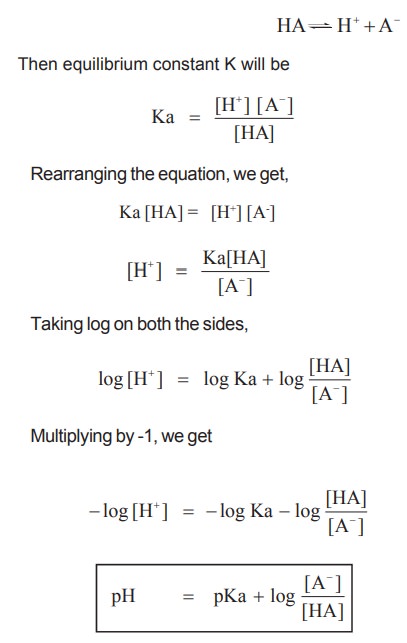 The pH of blood is 7.4 and it should be maintained constant . If pH increases above 7.5, alkalosis occurs and beyond 7.8 death occurs.

If it falls below, 7.3, acidosis occurs and below 7.0 is incompatible for life. Due to metabolism and dietary intake, large quantities of acids and bases are produced in the body and they have to be transported through blood for elimination. This should occur without any major changes in the pH. This is effectively done in the body by means of the buffers present in the blood and by two mechanisms, namely the respiratory mechanism and the renal mechanism.

The buffer systems of blood are as follows 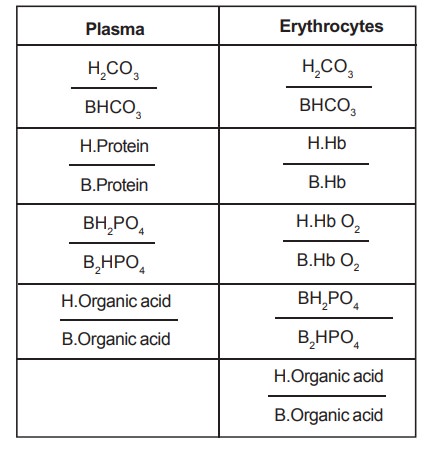 The numerators are acid components and the denominators are salts.

Since the concentrations of phosphate and organic acids are low in plasma, they do not play a major role in regulation of pH.

The major buffer in plasma is bicarbonate buffer and the pKa of carbonic acid is 6.1. Substituting it in the Henderson Hasselbach equation, 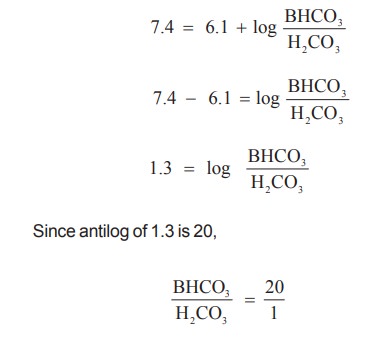 To effectively maintain the pH of blood, according to Henderson Hasselbach equation, the ratio of bicarbonate to carbonic acid should be 20 : 1. The carbon dioxide produced by metabolism is buffered by the hemoglobin buffer system as follows.

In the tissues, where oxygen tension is reduced, HbO2 dissociates to give oxygen to the tissues. In turn, the CO2 produced in the tissues will combine with H2O to form H2CO3, which dissociates to H+ and HCO3-. The reduced Hb devoid of O2 combines with H+ ions to form HHb resulting a very little change in the pH.

When the blood returns to the lungs, O2 tension in the lungs is high resulting in the oxygenation of Hb. As mentioned earlier, HbO2 has lesser affinity to H+ and releases it. It combines with HCO3- ions to form H2CO3 that dissociates to H2O and CO2. 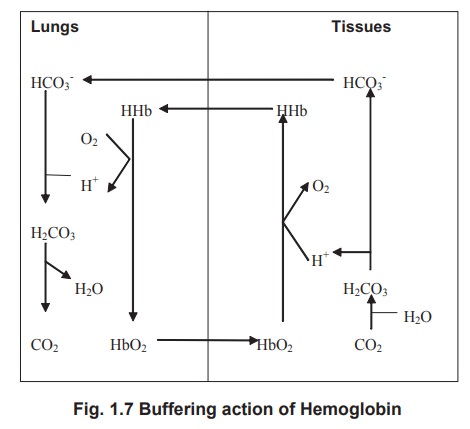 It has been found that more than 80% of the buffering capacity of blood is due to red blood cells. But the buffered HCO3- is transported in the plasma. The process of transport of the formed HCO3- from the RBCs into the plasma needs chloride ions and the phenomenon is called as Hamberger’s chloride bicarbonate shift.

When CO2 liberated from the tissues enters theRBC via plasma, it combines with water to form carbonic acid, the reaction catalysed by an enzyme called as carbonic anhydrase. The same enzyme can also dissociate carbonic acid to carbon dioxide and water. Carbonic acid dissociates into HCO3- and H+ ions. 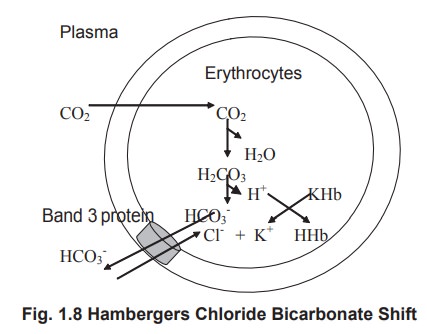 Respiratory mechanism plays an important role in the regulation of acid-base balance because the respiratory centre is sensitive to the changes in pCO2 .

If there is an increase in pCO2, increased respiration occurs, helping to remove the excess CO2. This continues until the blood regains normal pCO2 and pH. Similarly a fall in the pCO2 leads to slow, shallow respiration, hypoventilation and retention of CO2.

The lungs can remove only volatile acids like CO2 but not the organic acids like lactic acid and pyruvic acids. These acids are effectively buffered by the bicarbonate system, but at the expense of the bicarbonate, which is called as the alkali reserve of the body. Lungs can eliminate H2CO3, but cannot restore bicarbonate. This is doneby the kidneys, which are the ultimate regulators of acid base balance. In acidemia, inorder to bring the low pH to normal, the excessive H+ ions should be excreted and bicarbonate excretion should be reduced. This is done by excreting a highly acidic urine (pH 4.5). On the other hand, during alkalemia, the kidneys excrete the excess bicarbonate producing an alkaline urine (pH 8.2). The three important mechanisms attributed by the kidneys to regulate the blood pH are