Bronchiectasis is a chronic, irreversible dilation of the bronchiand bronchioles.

Bronchiectasis is a chronic, irreversible dilation of the bronchiand bronchioles. Under the new definition of COPD, it is considered a separate disease process from COPD (NIH, 2001). Bronchiectasis may be caused by a variety of conditions, including:

·      Genetic disorders such as cystic fibrosis

A person may be predisposed to bronchiectasis as a result of recurrent respiratory infections in early childhood, measles, in-fluenza, tuberculosis, and immunodeficiency disorders.

The inflammatory process associated with pulmonary infections damages the bronchial wall, causing a loss of its supporting struc-ture and resulting in thick sputum that ultimately obstructs the bronchi. The walls become permanently distended and distorted, impairing mucociliary clearance. The inflammation and infection extend to the peribronchial tissues; in the case of saccular bronchiectasis, each dilated tube virtually amounts to a lung ab-scess, the exudate of which drains freely through the bronchus. Bronchiectasis is usually localized, affecting a segment or lobe of a lung, most frequently the lower lobes.

The retention of secretions and subsequent obstruction ulti-mately cause the alveoli distal to the obstruction to collapse (at-electasis). Inflammatory scarring or fibrosis replaces functioning lung tissue. In time the patient develops respiratory insufficiency with reduced vital capacity, decreased ventilation, and an increased ratio of residual volume to total lung capacity. There is impair ment in the matching of ventilation to perfusion (ventilation– perfusion imbalance) and hypoxemia.

Characteristic symptoms of bronchiectasis include chronic cough and the production of purulent sputum in copious amounts. Many patients with this disease have hemoptysis. Clubbing of the fingers also is common because of respiratory insufficiency. The patient usually has repeated episodes of pulmonary infection. Even with modern treatment approaches, the average age at death is approximately 55 years.

Bronchiectasis is not readily diagnosed because the symptoms can be mistaken for those of simple chronic bronchitis. A definite sign is offered by the prolonged history of productive cough, with sputum consistently negative for tubercle bacilli. The diagnosis is established by a computed tomography (CT) scan, which demon-strates either the presence or absence of bronchial dilation.

Treatment objectives are to promote bronchial drainage to clear excessive secretions from the affected portion of the lungs and to prevent or control infection. Postural drainage is part of all treat-ment plans because draining the bronchiectatic areas by gravity reduces the amount of secretions and the degree of infection. Sometimes mucopurulent sputum must be removed by bron-choscopy. Chest physiotherapy, including percussion and pos-tural drainage, is important in secretion management.

Smoking cessation is important because smoking impairs bronchial drainage by paralyzing ciliary action, increasing bron-chial secretions, and causing inflammation of the mucous mem-branes, resulting in hyperplasia of the mucous glands. Infection is controlled with antimicrobial therapy based on the results of sen-sitivity studies on organisms cultured from sputum. A year-round regimen of antibiotic agents may be prescribed, with different types of antibiotics at intervals. Some clinicians prescribe anti-biotic agents throughout the winter or when acute upper respira-tory tract infections occur. Patients should be vaccinated against influenza and pneumococcal pneumonia. Bronchodilators, which may be prescribed for patients who also have reactive airway dis-ease, may also assist with secretion management.

Surgical intervention, although used infrequently, may be in-dicated for the patient who continues to expectorate large amounts of sputum and has repeated bouts of pneumonia and he-moptysis despite adhering to the treatment regimen. However, the disease must involve only one or two areas of the lung that can be removed without producing respiratory insufficiency. The goals of surgical treatment are to conserve normal pulmonary tis-sue and to avoid infectious complications. Diseased tissue is re-moved, provided that the postoperative lung function will be adequate. It may be necessary to remove a segment of a lobe (segmental resection), a lobe (lobectomy), or rarely an entire lung (pneumonectomy). (See Chart 25-16 for further information.) Segmental resection is the removal of an anatomic subdivision of a pulmonary lobe. The chief advantage is that only diseased tis-sue is removed and healthy lung tissue is conserved. 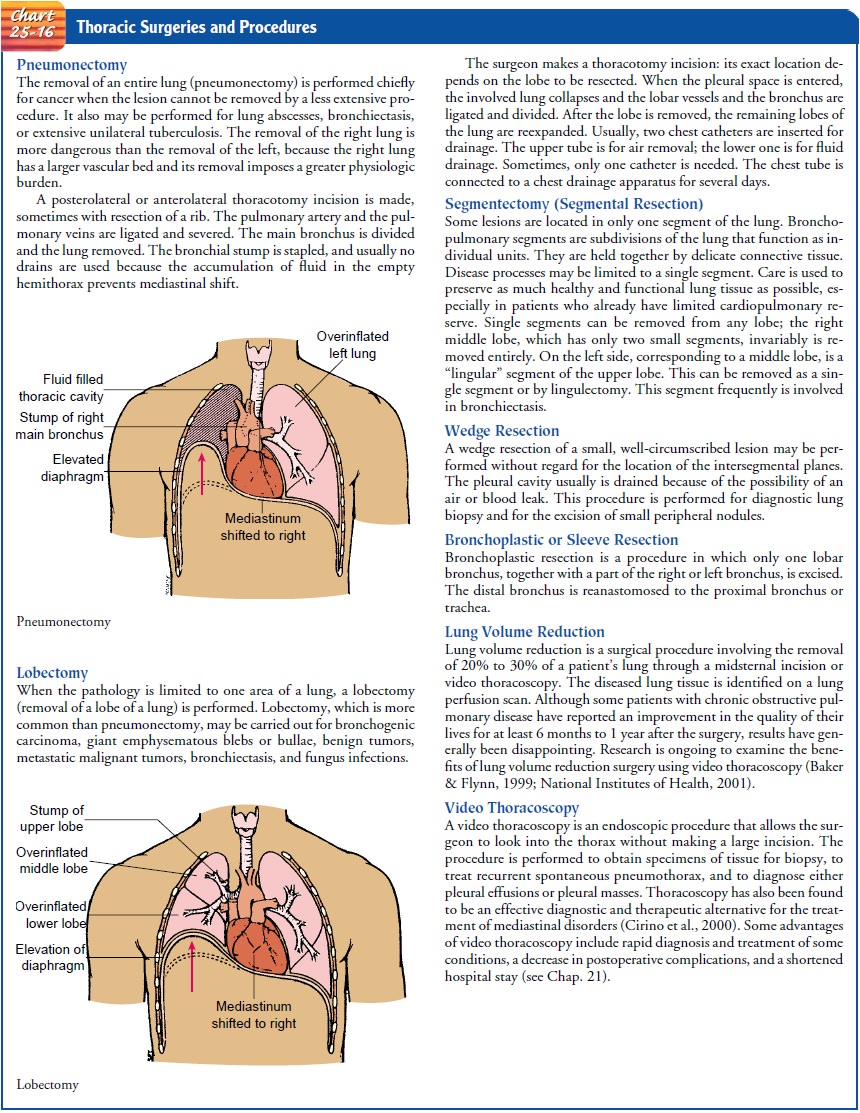 The surgery is preceded by a period of careful preparation. The objective is to obtain a dry (free of infection) tracheo-bronchial tree to prevent complications (atelectasis, pneumonia, bronchopleural fistula, and empyema). This is accomplished by postural drainage or, depending on the location, by direct suction through a bronchoscope. A course of antibacterial therapy may be prescribed. After surgery, the care is the same as for any patient undergoing chest surgery.

Nursing management of the patient with bronchiectasis focuses on alleviating symptoms and assisting the patient to clear pul-monary secretions. Smoking and other factors that increase the production of mucus and hamper its removal are targeted in pa-tient teaching. The patient and family are taught to perform pos-tural drainage and to avoid exposure to others with upper respiratory and other infections. If the patient experiences fa-tigue and dyspnea, strategies to conserve energy while maintain-ing as active a lifestyle as possible are discussed. The patient needs to become knowledgeable about early signs of respiratory infection and the progression of the disorder so that appropriate treatment can be implemented promptly. Because the presence of a large amount of mucus may decrease the patient’s appetite and result in an inadequate dietary intake, the patient’s nutritional status is assessed and strategies are implemented to ensure an ad-equate diet.