An architectural feature that supports static branch predication, namely delayed branches. Delayed branches expose a pipeline hazard so that the compiler can reduce the penalty associated with the hazard. The effectiveness of this technique partly depends on whether we correctly guess which way a branch will go. Being able to accurately predict a branch at compile time is also helpful for scheduling data hazards. Loop unrolling is on branches. Loop unrolling is on simple example of this; another example arises from conditional selection branches.

To perform these optimizations, we need to predict the branch statically when we compile the program. There are several different methods to statically predict branch behavior. The simplest scheme is to predict a branch as taken. This scheme has an average misprediction rate that is equal to the untaken branch frequency, which for the SPEC programs is 34%.

Unfortunately, the misprediction rate ranges from not very accurate (59%) to highly accurate (9%).

A still more accurate technique is to predict branches on the basis of profile information collected from earlier runs. The key observation that makes this worthwhile is that the behavior of branches is often bimodally distributed; that is, an individual branch is often highly biased toward taken or untaken.

Ø A branch-prediction buffer is a small memory indexed by the lower portion of the address of the branch instruction.

Ø The memory contains a bit that says whether the branch was recently taken or not. if the prediction is correct—it may have been put there by another branch that has the same low-order address bits.

Ø The prediction is a hint that is assumed to be correct, and fetching begins in the predicted direction. If the hint turns out to be wrong, the prediction bit is inverted and stored back.

Ø This simple one-bit prediction scheme has a performance shortcoming: Even if a branch is almost always taken, we will likely predict incorrectly twice, rather than once, when it is not taken. 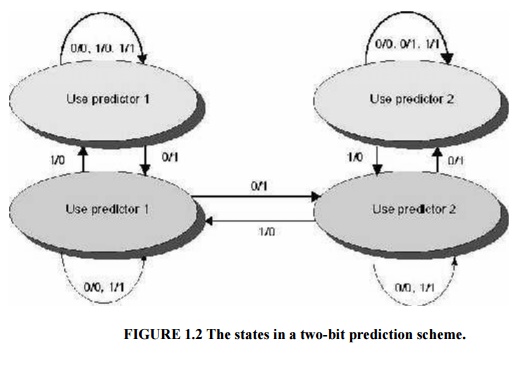 The two-bit scheme is actually a specialization of a more general scheme that has an n-bit saturating counter for each entry in the prediction buffer. With an n-bit counter, the counter can take on values between 0 and 2 n – 1: when the counter is greater than or equal to one half of its maximum value (2 n-1), the branch is predicted as taken; otherwise, it is predicted untaken.

Consider a small code fragment from the SPEC92 benchmark

Here is the MIPS code that we would typically generate for this code fragment assuming that aa and bb are assigned to registers R1 and R2:

Branch predictors that use the behavior of other branches to make a prediction are called correlating predictors or two-level predictors.

A branch-prediction cache that stores the predicted address for the next instruction after a branch is called a branch-target buffer or branch-target cache.

For the classic, five-stage pipeline, a branch-prediction buffer is accessed during the ID cycle, so that at the end of ID we know the branch-target address (since it is computed during ID), the fall-through address (computed during IF), and the prediction. Thus, by the end of ID we know enough to fetch the next predicted instruction. For a branch-target buffer, we access the buffer during the IF stage using the instruction address of the fetched instruction, a possible branch, to index the buffer. If we get a hit, then we know the predicted instruction address at the end of the IF cycle, which is one cycle earlier than for a branch-prediction buffer.

If a matching entry is found in the branch-target buffer, fetching begins immediately at the predicted PC. Note that the entry must be for this instruction, because the predicted PC will be sent out before it is known whether this instruction is even a branch. If we did not check whether the entry matched this PC, then the wrong PC would be sent out for instructions that were not branches, resulting in a slower processor. We only need to store the predicted-taken branches in the branch-target buffer, since an untaken branch follows the same strategy as a non branch. 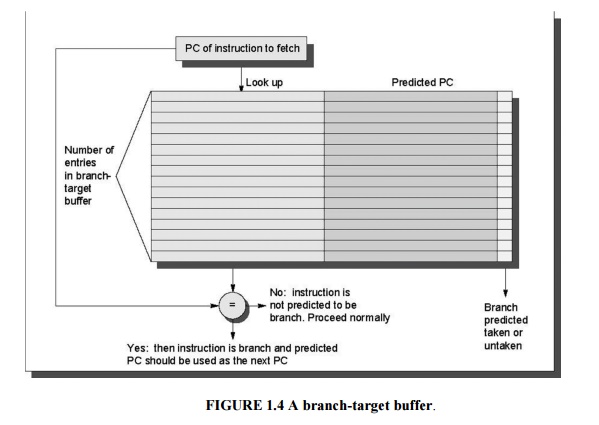 Figure 1.5 shows the steps followed when using a branch-target buffer and where these steps occur in the pipeline. From this we can see that there will be no branch delay if a branch-prediction entry is found in the buffer and is correct.

1.  Integrated branch prediction: the branch predictor becomes part of the instruction fetch unit and is constantly predicting branches, so to drive the fetch pipeline.

2.  Instruction prefetch: to deliver multiple instructions per clock, the instruction fetch unit will likely need to fetch ahead. The unit autonomously manages the prefetching of instructions, integrating it with branch prediction.

3.  Instruction memory access and buffering:.The instruction fetch unit also provides buffering, essentially acting as an on-demand unit to provide instructions to the issue stage as needed and in the quantity needed 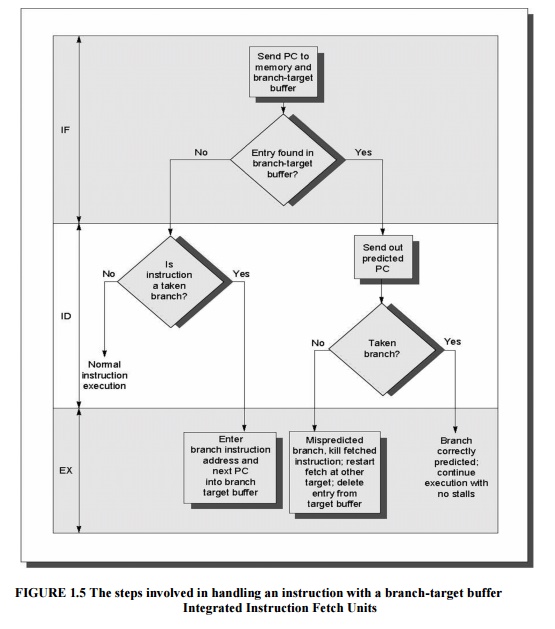