A bipolar junction transistor is a three terminal semiconductor device in which the operation depends on the interaction of majority and minority carriers.

Ø   A bipolar junction transistor is a three terminal semiconductor device in which the operation depends on the interaction of majority and minority carriers.

Ø   BJT consists of silicon crystal in which a layer of ‘N’ type silicon is sandwiched between two layers of ‘P’ type silicon. The semiconductor sandwiched is extremely smaller in size.

Ø   In other words, it consists of two back to back PN junction joined together to form single piece of semiconductor crystal. These two junctions gives three region called Emitter, Base and Collector.

Ø   There are two types of transistors such as PNP and NPN. The arrow on the emitter specifies whether the transistor is PNP or NPN type and also determines the direction of flow of current, when the emitter base junction is forward biased.

Emitter: It is more heavily doped than any of the other region because its main function is to supply majority charge carriers to the base.

Base: It forms the middle section of the transistor. It is very thin as compared to either the emitter or collector and is very lightly doped.

Collector: Its main function is to collect the majority charge carriers coming from the emitter and passing through the base. In most transistors, collector region is made physically larger than the emitter because it has to dissipate much greater power.

Ø   One p-n junction of a transistor is reverse-biased, whereas the other is forward-biased.

Ø   Both biasing potentials have been applied to a pnp transistor and resulting majority and minority carrier flows indicated. 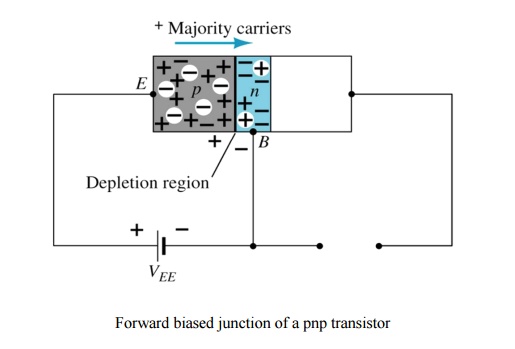 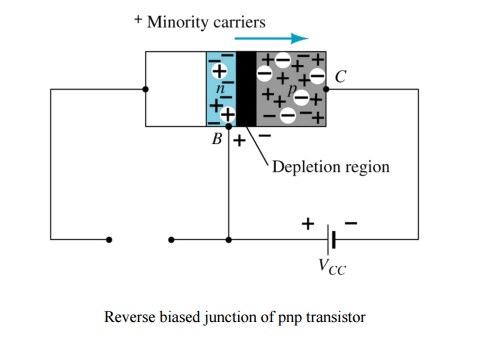 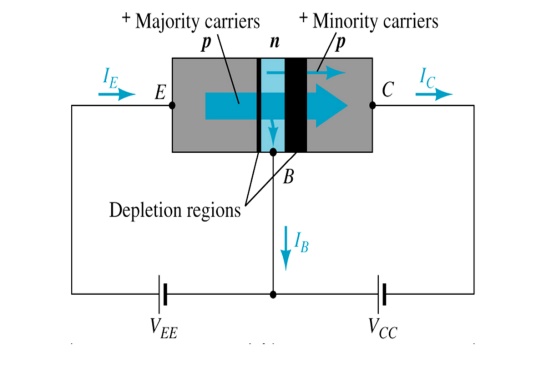 Ø   Majority carriers (+) will diffuse across the forward-biased p-n junction into the n-type material.

Ø   A very small number of carriers (+) will through n-type material to the base terminal. Resulting IB is typically in order of microamperes.

Ø   The large number of majority carriers will diffuse across the reverse-biased junction into the p-type material connected to the collector terminal.

Ø   Applying KCL to the transistor :

Ø   The comprises of two components – the majority and minority carriers

Ø   Common-base terminology is derived from the fact that the :

-         base is common to both input and output of the configuration.

-         base is usually the terminal closest to or at ground potential.

Ø   All current directions will refer to conventional (hole) flow and the arrows in all electronic symbols have a direction defined by this convention.

Ø   Note that the applied biasing (voltage sources) are such as to establish current in the direction indicated for each branch. 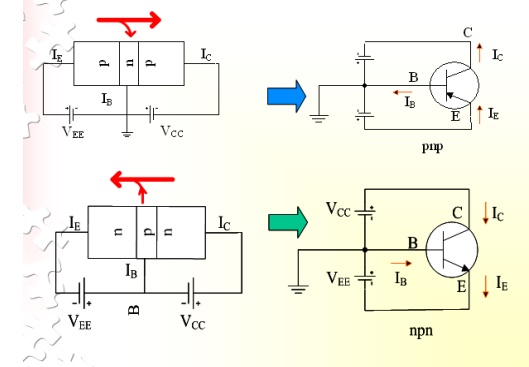 Ø   The output characteristics has 3 basic regions:

o  Cutoff region – region where the collector current is 0A 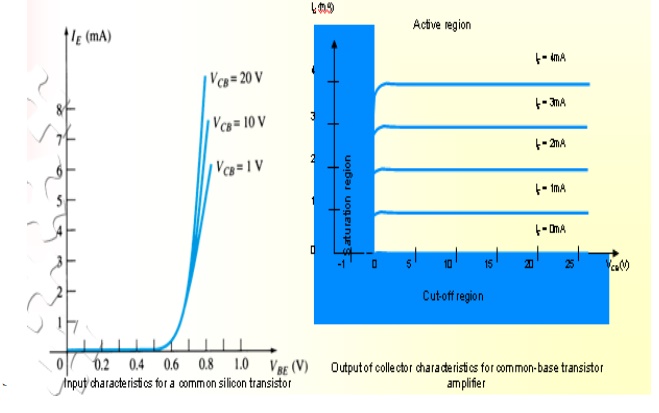 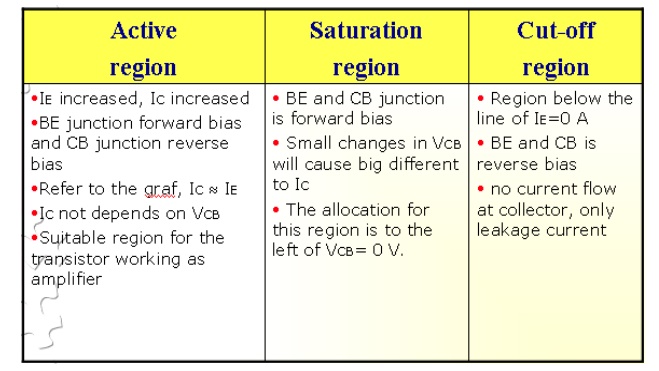 Ø   Once a transistor is in the ‘on’ state, the base-emitter voltage will be assumed to be 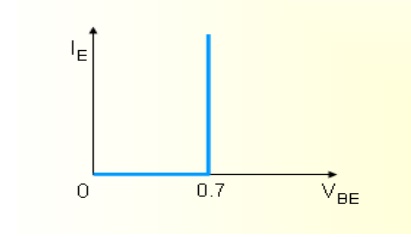 Ø   For ac situations where the point of operation moves on the characteristics curve, an ac alpha defined by

Ø   Alpha a common base current gain factor that shows the efficiency by calculating the current percent from current flow from emitter to collector. The value of  is typical from

Ø It is called common-emitter configuration since :

o  emitter is common or reference to both input and output terminals.

o   emitter is usually the terminal closest to or at ground potential.

Ø   Almost amplifier design is using connection of CE due to the high gain for current and voltage.

Ø   Two set of characteristics are necessary to describe the behavior for CE; input (base terminal) and output (collector terminal) parameters. 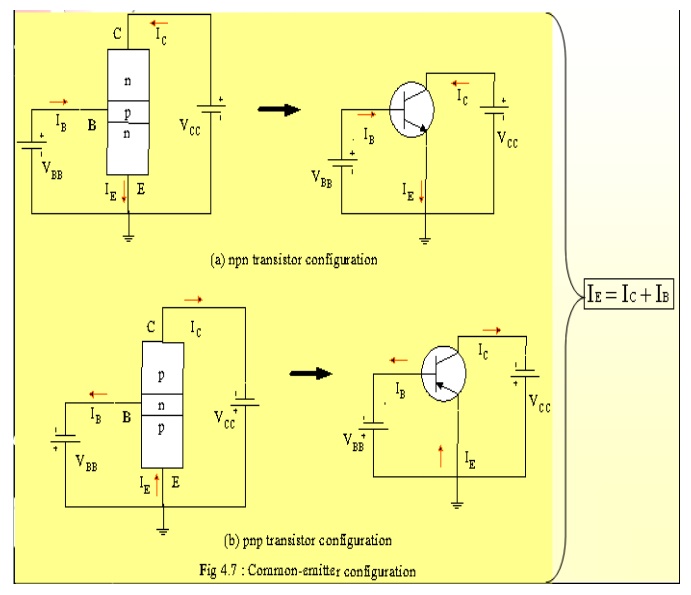 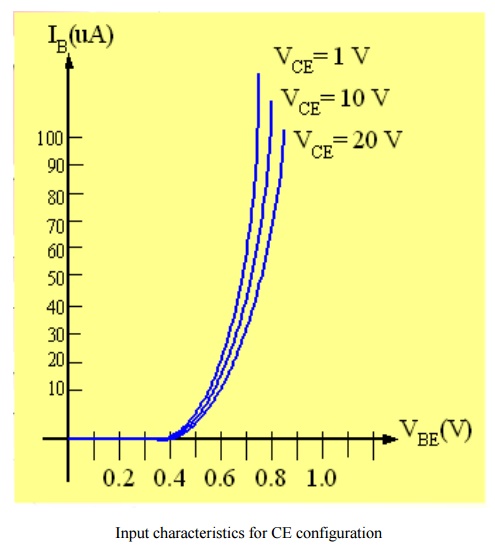 Ø   IB in microamperes compared to milliamperes of IC.

Ø   Before this value IB is very small and no IB. 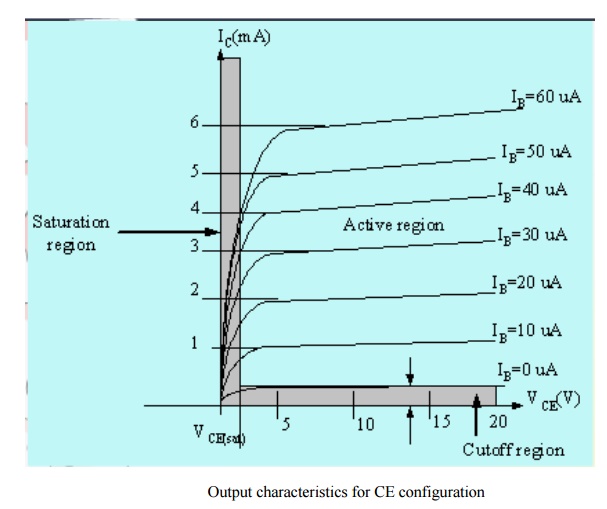 Ø   Noticing the value when IC=0A. There is still some value of current flows. 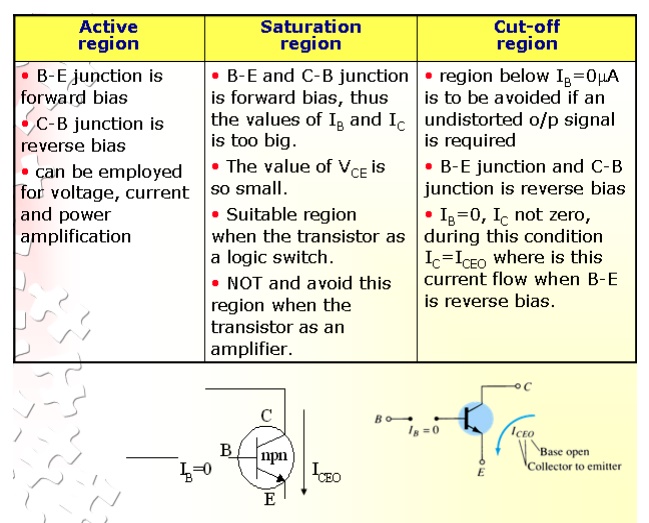 Ø   It is called common-emitter configuration since both the

o   signal source and the load share the collector terminal as a common connection point.

Ø   The output voltage is obtained at emitter terminal.

Ø   The input characteristic of common-collector configuration is similar with common-emitter. configuration.

Ø   Common-collector circuit configuration is provided with the load resistor connected from emitter to ground.

Ø   It is used primarily for impedance-matching purpose since it has high input impedance and low output impedance. 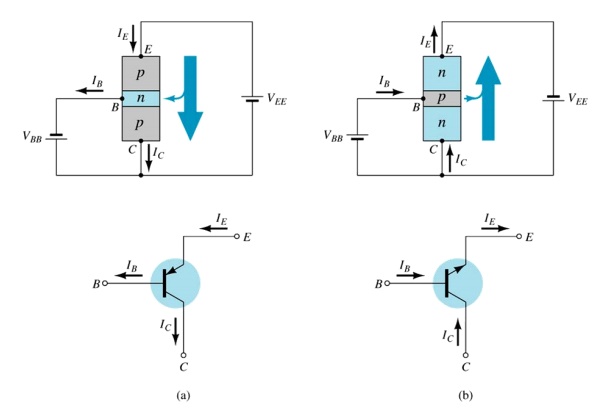 Ø   For the common-collector configuration, the output characteristics are a plot of IE vs VCE for a range of values of IB. 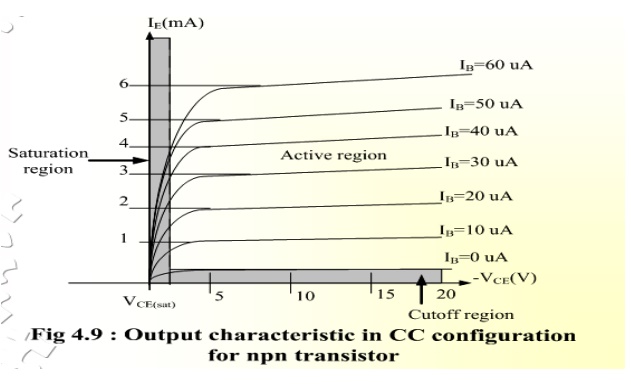 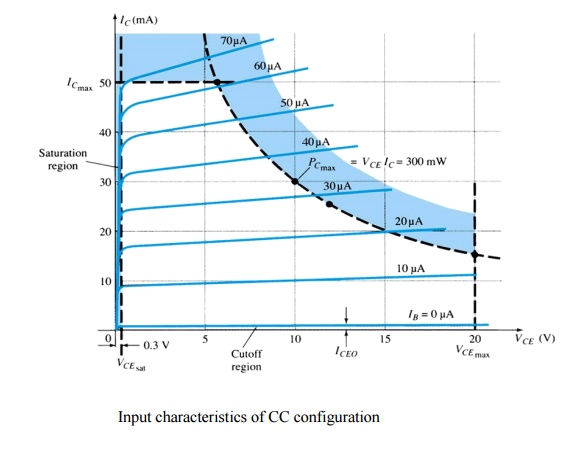 When the input signal is so weak as to produce small fluctuations in the collector current compared to its quiescent value, the amplifier is known as Small Signal Amplifier.

In other words, as the name indicates, the input applied to the circuit is Vin << Vth. It has only one amplifying device.