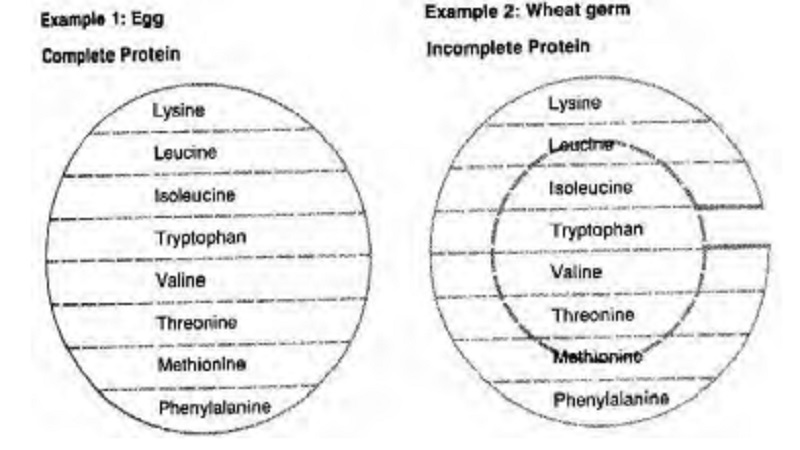 Biological value of protein is the percentage of a protein nitrogen that is absorbed and available for use by the body for growth and maintenance.

Biological value of protein is the percentage of a protein nitrogen that is absorbed and available for use by the body for growth and maintenance.

The quality of a protein is determined by the kind and proportion of amino acid it contains. Proteins that contain all essential amino acids in proportions capable of promoting growth are described as complete protein, good quality protein, or proteins of high biological value.

A good quality protein is digested and utilized well. Egg protein is a complete protein and is considered as a reference protein with the highest biological value. The quality of other proteins is determined based on their comparison with egg protein as in figure.

The eight essential amino acids (EAA) must be present in a protein in specific ratios. Egg protein has all eight in the correct proportions used most efficiently and completely by the body.

Wheat germ is an incomplete protein because it is deficient in tryptophan (incomplete circle). As a result of this deficiency only less of the total protein can be used (as represented by the inner dotted circle).

The protein of animal foods like milk, meat, and fish generally compare well with egg in the essential amino acid composition and are categorized as good quality proteins.

Plant proteins are of poor quality, since the essential amino acid composition is not well balanced.

The amino acid, which is not present in sufficient amount in food protein, is called the limiting amino acid of that food. For (eg) Lysine in cereal protein, Tryptophan in Wheat germ.

The limitation in cereals can be overcome by a judicious combination with pulses, which are rich in lysine.

The resulting mixture of cereals and pulse will have an amino acid pattern better than either of the constituents. Thus a combination of cereal and pulse has a supplementary effect. For (eg) recipes like, Pongal, Idli, dhokla are based on cereal pulse combination.

Thus the habitual diets in India based on cereal and pulse have indeed a rational basis. The biological value of some important food proteins is given in table-18A.