To increase the sales, a seller sells the goods on credit to his customers.

To increase the sales, a seller sells the goods on credit to his customers. If sale is made on credit, cash will not be received immediately. The seller may draw a bill on the customer for the amount due from him. If the customer accepts it, the seller can get the same discounted with the bank and get cash immediately.

Definition of bill of exchange

According to the Negotiable Instruments Act, 1881, “Bill of exchange is an instrument in writing containing an unconditional order, signed by the maker, directing a certain person to pay a certain sum of money only to, or to the order of a certain person or to the bearer of the instrument”.

Features of bills of exchange

An analysis of the definition given above, highlights the following important features of a bill of exchange:

Specimen of bill of exchange 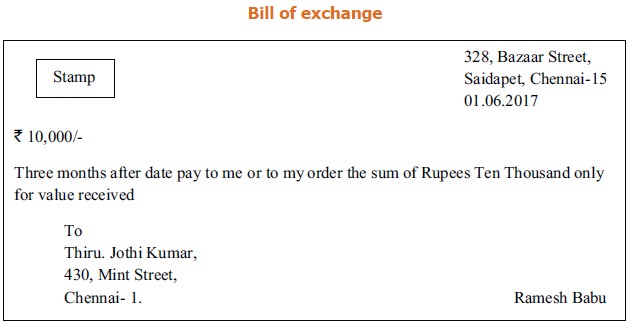 Explanation of some terms connected with bill of exchange is given below:

(i) Drawing of a bill

The seller (creditor) prepares the bill in the form presented above. The act of preparing the bill by the seller or creditor in its complete form with the signature is known as ‘drawing’ a bill.

There are three parties to a bill of exchange as under:

Drawer: The person who prepares the bill is called the drawer, i.e., a creditor

Payee: The person who receives the payment is payee. He may be a third party or the drawer of the bill.

In the above specimen, drawer and payee is Ramesh Babu. Jothi Kumar is the drawee.

In a bill, drawee gives his/her acceptance by writing the word ‘accepted’ and signs the same with the date. Now the bill becomes a legal document enforceable in the court of law.

(iv) Due date and days of grace

When a bill is drawn payable after a specified period, the date on which the payment should be made is called ‘Due date’. In the calculation of the due date, three extra days are added to the specified period of the bills called ‘Days of grace’. If the date of maturity falls on a holiday, the bill will be due for payment on the preceding day.

When the holder of a bill is in need of money before the due date of a bill, cash can be received by discounting the bill with the banker. This process is referred to as the discounting of bill. The banker deducts a small amount of the bill which is called discount and pays the balance in cash immediately to the holder of the bill.

An acceptor may make the payment of a bill before its due date and may discharge the liability on the bill. It is called as retirement of a bill. Usually, the holder of the bill allows a concession called rebate to the drawee for the unexpired period of the bill.

When the acceptor of a bill knows in advance that he/she will not be able to meet the bill on its due date, he/she may request the drawer for extension of time for payment. The drawer of the bill may agree to cancel the original bill and draw a new bill for the amount due with interest thereon. This is referred to as renewal.

Dishonour of the bill means the non payment of the amount of the bill, when it is presented for payment.