We use soaps for bathing as well as washing. Soaps are slippery in nature. Do you know why? Soaps are slippery due to the presence of ‘base’. Bases are chemical substances that are corrosive and bitter in taste. A lot of bleaches, soaps, detergents, toothpaste, etc. , contain bases. In contrast to acids which release hydrogen ions in water, bases release hydroxide ions in water. 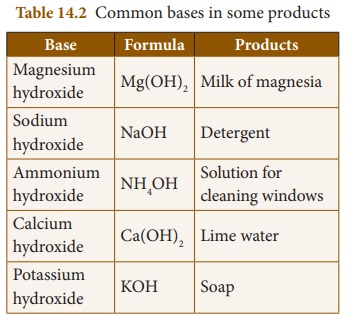 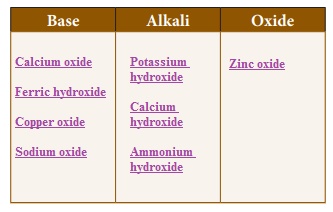 • Bases give soapy touch only in aqueous medium not in dry nature.

• Bases are bitter in taste.

• Bases are corrosive in nature. When come in contact with the skin frequently they form painful blisters.

• Bases also change the colour of the indicators. Red litmus paper turns blue when treated with bases. Similarly, they turn methyl orange to yellow and phenolphthalein to pink colour

i. Reaction with metals

Though acids and bases have some unique properties there are certain similarities between them. Some of them are given below.

* They are corrosive in nature.

* They undergo ionization in aqueous solution

* They conduct electricity in aqueous solution.

* Some of the differences between acids and bases are given in Table 14. 3. 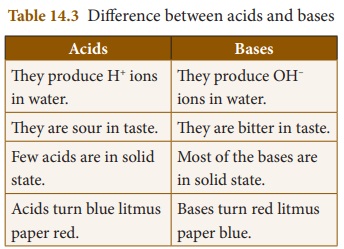 i. Potassium hydroxide is used to make bathing soaps.

iii. Sodium hydroxide is also used in paper industries, textile industries and in the preparation of medicines. 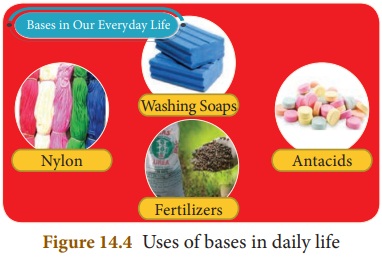