An amplifier is used to increase the signal level. It is used to get a larger signal output from a small signal input.

An amplifier is used to increase the signal level. It is used to get a larger signal output from a small signal input. Assume a sinusoidal signal at the input of the amplifier. At the output, signal must remain sinusoidal in waveform with frequency same as that of input. To make the transistor work as an amplifier, it is to be biased to operate in active region. It means base-emitter junction is forward biased and base-collector junction is reverse biased. 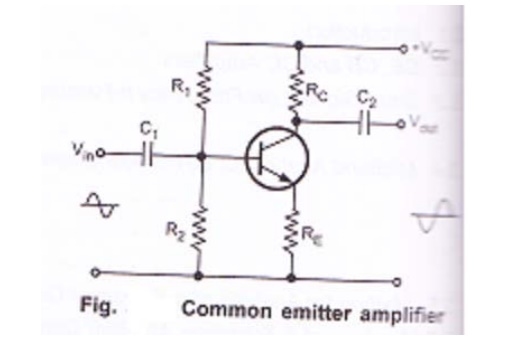 In the absence of input signal, only D.C. voltage is present in the circuit. It is known as zero signal or no signal condition or quiescent condition. D.C. collector-emitter voltage VCE, D.C. collector current IC and base current I B is the quiescent operating point for the amplifier. Due to this base current varies sinusoidaly as shown in the below figure. Fig. IBQ is quiescent DC base current

If the transistor is biased to operate in active region, output is linearly proportional to the input. The collector current is β times larger than the input base current in CE configuration. The collector current will also vary sinusoidally about its quiescent value ICQ. The output voltage will also vary sinusoidally as shown in the below figure.

Variations in the collector current and voltage between collector and emitter due to change in base current are shown graphically with the help of load line in the above figure.