The idea of the B&B algorithm is to start with the optimum solution of the associated assignment problem.

The idea of the B&B algorithm is to start with the optimum solution of the associated assignment problem. If the solution is a tour, the process ends. Otherwise, restrictions are imposed to remove the subtours. This can be achieved by creating as many branch-es as the number of xij variables associated with one of the subtours. Each branch will correspond to setting one of the variables of the subtour equal to zero (recall that all the variables associated with a subtour equal 1). The solution of the resulting assign-ment problem mayor may not produce a tour. If it does, we use its objective value as an upper bound on the true minimum tour length. If it does not, further branching is necessary, again creating as many branches as the number of variables in one of the subtours. The process continues until all unexplored subproblems have been fathomed, either by producing a better (smaller) upper bound or because there is evidence that the subproblem cannot produce a better solution. The optimum tour is the one associ-ated with the best upper bound.

The following example provides the details of the TSP B&B algorithm.

We start by solving the associated assignment, which yields the following solution:

A straightforward way to determine an upper bound is to select any tour and use its length as an upper bound estimate. For example, the tour 1-2-3-4-5-1 (selected totally arbitrarily) has a total length of 10 + 5 + 7 + 4 + 3 = 29. Alternatively, a better upper bound can be found by applying the heuristic of Section 9.3.1. For the moment, we will use the upper bound of length 29 to apply the B&B algorithm. Later, we use the "improved" upper bound obtained by the heuristic to demonstrate its impact on the search tree. 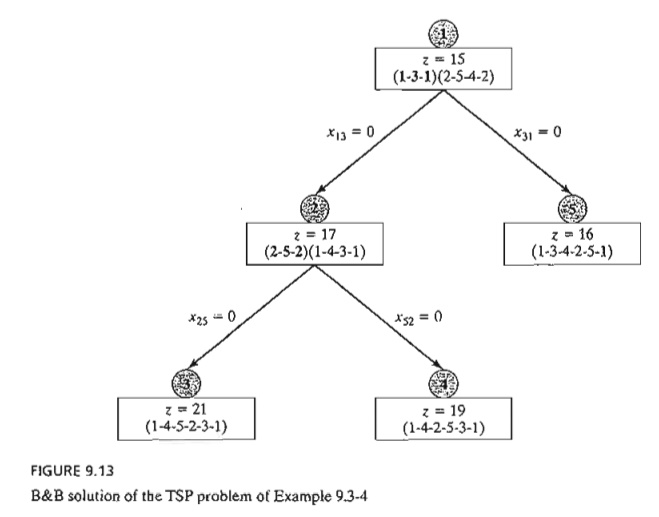 The computed lower and upper bounds indicate that the optimum tour length lies in range (15, 29). A solution that yields a tour length larger than (or equal to) 29 is discarded as nonpromising.

To eliminate the subtours at node 1, we need to "disrupt" its loop by forcing its member variables, xij, to be zero. Subtour 1-3-1 is disrupted if we impose the restriction xl3 = 0 or x31 = 0 (i.e., one at a time) on the assignment problem at node 1. Similarly, subtour 2-5-4-2 is eliminated by imposing one of the restrictions x25 = 0, x54 = 0, or x42 = 0. In terms of the B&B tree, each of these restrictions gives rise to a branch and hence a new subproblem. It is important to notice that branching both subtours at node 1 is not necessary. Instead, only one subtour needs to be disrupted at anyone node. The idea is that a breakup of one subtour automatically alters the member variables of the other subtour and hence produces conditions that are favorable to creating a tour. Under this argument, it is more efficient to select the subtour with the smallest number of cities because it creates the smallest number of branches.

We now have three unexplored subproblems, one from node 1 and two from node 2, and we are free to investigate any of them at this point. Arbitrarily exploring the subproblem associated with x25 = 0 from node 2, we set d13 = ¥ and d25 = ¥ in the original assignment problem, which yields the solution z = 21 and the tour solution 1-4-5-2-3-1 at node 3. The tour solution at node 3 lowers the upper bound from z == 29 to z == 21. This means that any unexplored subproblem that can be shown to yield a tour length larger than 21 is discarded as nonpromising.

We now have two unexplored subproblems. Selecting the subproblem 4 for exploration, we set dl3 = ¥ and d52 = ¥ in the original assignment, which yields the tour solution 1-4-2-5-3-1 with z = 19. The new solution provides a better tour than the one associated with the current upper bound of 21. Thus, the new upper bound is updated to z = 19 and its associated tour, 1-4-2-5-3-1, is the best available so far.

Only subproblem 5 remains unexplored. Substituting d31 = ¥ in the original assignment problem at node 1, we get the tour solution 1-3-4-2-5-1 with z = 16, at node 5. Once again, this is a better solution than the one associated with node 4 and thus requires updating the upper bound to z = 16.

There are no remaining unfathomed nodes, which completes the search tree. The optimal tour is the one associated with the current upper bound: 1-3-4-2-5-1 with length 16 miles.

Remarks. The solution of the example reveals two points:

1. Although the search sequence 1 -> 2 -> 3 -> 4 -> 5 was selected deliberately to demonstrate the mechanics of the B&B algorithm and the updating of its upper bound, we generally have no way of predicting which sequence should be adopted to improve the efficiency of the search. Some rules of thumb can be of help. For example, at a given node we can start with the branch associated with the largest dij among all the created branches. By canceling the tour leg with the largest dij, the hope is that a "good" tour with a smaller total length will be found. In the present example, this rule calls for exploring branch x31 == 0 to node 5 be-fore branch x13 to node 2 because (d31 == 4) > (d13 == 3), and this would have produced the upper bound z == 16, which automatically fathoms node 2 and, hence, eliminates the need to create nodes 3 and 4. Another rule calls for sequencing the exploration of the nodes in a horizontal tier (rather than vertically). The idea is that nodes closer to the starting node are more likely to produce a tighter upper bound because the number of additional constraints (of the type xij = 0) is smaller. This rule would have also discovered the solution at node 5 sooner.

2. The B&B should be applied in conjunction with the heuristic in Section 9.3.1. The heuristic provides a "good" upper bound which can be used to fathom nodes in the search tree. In the present example, the heuristic yields the tour 1-3-4-2-5-1 with a length of 16 distance units.

Interactive AMPL commands are ideal for the implementation of the TSP B&B algorithm using the general assignment model (file ampIAssignment.txt). The following table summarizes the AMPL commands needed to create the B&B tree in Figure 9.13 (Example 9.3-4):

1. Solve Example 9.3-3 using subtour 2-5-4-2 to start the branching process at node 1, using the following sequences for exploring the nodes.

a)      Explore all the subproblems horizontally from left to right in each tier before preceeding to the next tier.

b)      Follow each path vertically from node 1 until it ends with a fathomed node.