Azoles are synthetic compounds that can be classified as either imidazoles or triazoles according to the number of nitrogen atoms in the five-membered azole ring, as indicated below.

Azoles are synthetic compounds that can be classified as either imidazoles or triazoles according to the number of nitrogen atoms in the five-membered azole ring, as indicated below. The imidazoles consist of ketoconazole, miconazole, and clotrimazole (Figure 48–2). The latter two drugs are now used only in topical therapy. The triazoles include itraconazole, fluconazole, voricon-azole, and posaconazole.

The pharmacology of each of the azoles is unique and accounts for some of the variations in clinical use. Table 48–2 summarizes the differences among five of the azoles. 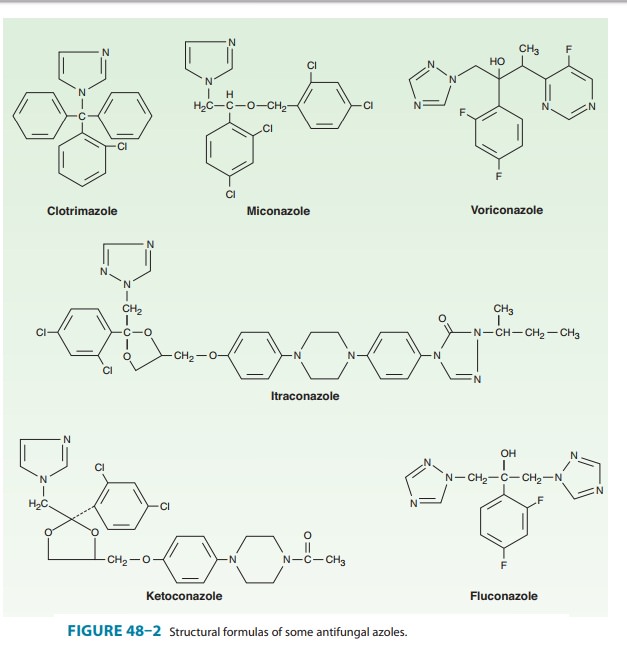 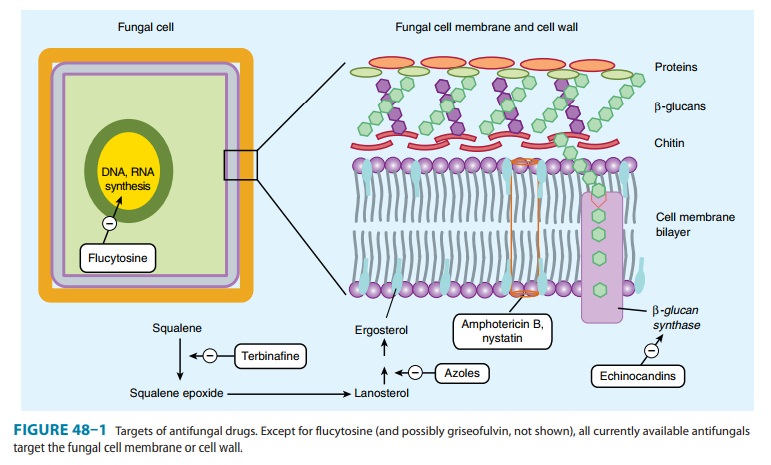 from their greater affinity for fungal than for human cytochrome P450 enzymes. Imidazoles exhibit a lesser degree of selectivity than the triazoles, accounting for their higher incidence of drug interactions and adverse effects.

Resistance to azoles occurs via multiple mechanisms. Once rare, increasing numbers of resistant strains are being reported, suggest-ing that increasing use of these agents for prophylaxis and therapy may be selecting for clinical drug resistance in certain settings.

The spectrum of action of azole medications is broad, including many species of Candida, C neoformans, the endemic mycoses (blastomycosis, coccidioidomycosis, histoplasmosis), the dermato-phytes, and, in the case of itraconazole and voriconazole, even Aspergillus infections. They are also useful in the treatment ofintrinsically amphotericin-resistant organisms such as P boydii.

As a group, the azoles are relatively nontoxic. The most com-mon adverse reaction is relatively minor gastrointestinal upset. All azoles have been reported to cause abnormalities in liver enzymes and, very rarely, clinical hepatitis. Adverse effects specific to indi-vidual agents are discussed below.

All azole drugs are prone to drug interactions because they affect the mammalian cytochrome P450 system of enzymes to some extent. The most significant reactions are indicated below.

Ketoconazole was the first oral azole introduced into clinical use. It is distinguished from triazoles by its greater propensity to inhibit mammalian cytochrome P450 enzymes; that is, it is less selective for fungal P450 than are the newer azoles. As a result, systemic ketoconazole has fallen out of clinical use in the USA and is not discussed in any detail here.

Itraconazole is available in oral and intravenous formulations and is used at a dosage of 100–400 mg/d. Drug absorption is increasedby food and by low gastric pH. Like other lipid-soluble azoles, it interacts with hepatic microsomal enzymes, though to a lesser degree than ketoconazole. An important drug interaction is reduced bioavailability of itraconazole when taken with rifamycins (rifampin, rifabutin, rifapentine). It does not affect mammalian steroid synthesis, and its effects on the metabolism of other hepat-ically cleared medications are much less than those of ketoconazole. While itraconazole displays potent antifungal activity, effective-ness can be limited by reduced bioavailability. Newer formula-tions, including an oral liquid and an intravenous preparation, have utilized cyclodextran as a carrier molecule to enhance solubil-ity and bioavailability. Like ketoconazole, itraconazole penetrates poorly into the cerebrospinal fluid. Itraconazole is the azole of choice for treatment of disease due to the dimorphic fungi Histoplasma, Blastomyces, and Sporothrix. Itraconazole has activity against Aspergillus sp, but it has been replaced by voriconazole as the azole of choice for aspergillosis. Itraconazole is used extensively in the treatment of dermatophytoses and onychomycosis.

Fluconazole displays a high degree of water solubility and good cerebrospinal fluid penetration. Unlike ketoconazole and itracon-azole, its oral bioavailability is high. Drug interactions are also less common because fluconazole has the least effect of all the azoles on hepatic microsomal enzymes. Because of fewer hepatic enzyme interactions and better gastrointestinal tolerance, fluconazole has the widest therapeutic index of the azoles, permitting more aggres-sive dosing in a variety of fungal infections. The drug is available in oral and intravenous formulations and is used at a dosage of 100–800 mg/d.

Fluconazole is the azole of choice in the treatment and second-ary prophylaxis of cryptococcal meningitis. Intravenous flucon-azole has been shown to be equivalent to amphotericin B in treatment of candidemia in ICU patients with normal white blood cell counts. Fluconazole is the agent most commonly used for the treatment of mucocutaneous candidiasis. Activity against the dimorphic fungi is limited to coccidioidal disease, and in particu-lar for meningitis, where high doses of fluconazole often obviate the need for intrathecal amphotericin B. Fluconazole displays no activity against Aspergillus or other filamentous fungi.

Prophylactic use of fluconazole has been demonstrated to reduce fungal disease in bone marrow transplant recipients and AIDS patients, but the emergence of fluconazole-resistant fungi has raised concerns about this indication.

Voriconazole is available in intravenous and oral formulations. The recommended dosage is 400 mg/d. The drug is well absorbed orally, with a bioavailability exceeding 90%, and it exhibits less protein binding than itraconazole. Metabolism is predominantly hepatic. Voriconazole is a clinically relevant inhibitor of mamma-lian CYP3A4, and dose reduction of a number of medications is required when voriconazole is started. These include cyclosporine, tacrolimus, and HMG-CoA reductase inhibitors. Observed toxicities include rash and elevated hepatic enzymes. Visual dis-turbances are common, occurring in up to 30% of patients receiv-ing intravenous voriconazole, and include blurring and changes in color vision or brightness. These visual changes usually occur immediately after a dose of voriconazole and resolve within 30 minutes. Photosensitivity dermatitis is commonly observed in patients receiving chronic oral therapy.

Voriconazole is similar to itraconazole in its spectrum of action, having excellent activity against Candida sp (including fluconazole-resistant species such as Candida krusei) and the dimorphic fungi. Voriconazole is less toxic than amphotericin B and is the treatment of choice for invasive aspergillosis.

Posaconazole is the newest triazole to be licensed in the USA. It is available only in a liquid oral formulation and is used at a dosage of 800 mg/d, divided into two or three doses. Absorption is improved when taken with meals high in fat. Posaconazole is rap-idly distributed to the tissues, resulting in high tissue levels but relatively low blood levels. Visual changes have not been reported, but drug interactions with increased levels of CYP3A4 substrates such as tacrolimus and cyclosporine have been documented.

Posaconazole is the broadest spectrum member of the azole family, with activity against most species of Candida and Aspergillus. It is the only azole with significant activity against the agents of mucormycosis. It is currently licensed for salvage therapy in inva-sive aspergillosis, as well as prophylaxis of fungal infections during induction chemotherapy for leukemia, and for allogeneic bone marrow transplant patients with graft-versus-host disease.