Atoms are the building blocks of matter. Every substance is made up of atoms in one form or other.

We already know that anything that has definite mass and occupies space is known as matter.

What are the different states of matter?

Is matter continuous or particulate in nature?

Atoms are the building blocks of matter. Every substance is made up of atoms in one form or other. Different kinds of atoms have different properties (both physical and chemical).

You already know that atoms combine together to form molecules. This combination is called a chemical reaction which can be represented symbolically by balanced chemical equations.

Now look at the following equation. What do you understand?

We can say that Sodium and Chlorine combine to form Sodium Chloride. 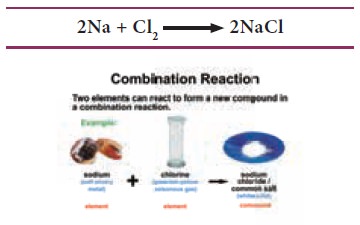 What is a combination reaction?

Combination reaction is a reaction where two or more substances combine to form a single substance. The combination of different elements to form a compound is governed by certain basic rules. These rules are known as Laws of chemical combination.