Radioisotopes can easily be detected and estimated quantitatively. So they are used in radiochemistry for various applications. Radiochemistry mainly deals with study of chemical reactions of non-radioactive isotopes using radioisotopes.

You have studied in previous chapters that elements can exist in nature as their isotopes. Isotopes are atoms with the same number of protons and electrons, but a different number of neutrons. Some isotopes are stable and stay forever. These are the elements that we see around us and find in nature. However, some isotopes are unstable and they undergo disintegration by losing their energy in the form of radiation. As we studied earlier, every element tries to attain stability by sharing, losing or gaining electrons (octet rule). Thus the unstable isotopes of elements lose their energy in the form of radiation to become stable.

Radiocarbon dating: It is a method by which the age of fossil wood or animal is determined using C-14 isotope.

Study of chemical reactions: The nature of some of the chemical reactions can be studied by mixing a radioisotope with non-radioactive isotope of the reactants. The radioisotope used for this purpose is called radiotracer. For example, by photosynthesis plants synthesize carbohydrate from carbon dioxide and water as shown in the following reaction.

Here a question arises that whether the oxygen evolved in this process comes from CO2 or H2O. By using radioisotope O-18 as tracer, it was found that the evolved oxygen comes from H2O.

Diagnosis: Radioisotopes are found very useful to diagnose and understanded many diseases. 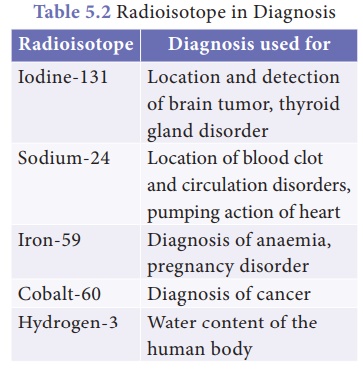 Radiotherapy: Radioactive isotopes are used in the treatment of many diseases. This kind treatment is called radiotherapy. 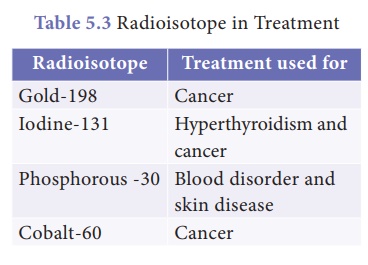