The African coastline had been explored in the sixteenth century and a few European settlements had come about. But the interior of Africa was unknown to the outside world until the last quarter of nineteenth century.

The African coastline had been explored in the sixteenth century and a few European settlements had come about. But the interior of Africa was unknown to the outside world until the last quarter of nineteenth century. European colonisation began after about 1875. The Berlin Colonial Conference of 1884–85 resolved that Africa should be divided into spheres of influence of various colonial powers. The war between the British and Boers in South Africa, however, was in defiance of this resolution.

The relations between the two British colonies of Natal and Cape Colony and the two independent Boer states of the Transvaal and the Orange Free State had long been unfriendly. The discovery of gold in Transvaal, in 1886, led to large numbers of British miners settling in and around Johannesburg. The Boers hated these people whom they referred to as Uitlanders (foreigners). The Boers taxed them heavily apart from denying political rights. So the question was whether the British or the Boers were to be supreme in South Africa. Fearing attacks from the British, the Boers armed themselves and decided to attack.

The Boer War lasted for three years, 1899-1902. Initially, the Boers were successful. But by the first half of 1900, the Boer army was defeated. Pretoria was occupied. The Boers took to guerrilla fighting. This continued for about two years. In retaliation the British destroyed farms and crops. They set up internment camps for Boer women and children. Shortage of food, medical and sanitary facilities caused the death of 26,000 people. The British annexed the two Boer states. Boers were however promised self-government in due course. In 1907 full responsible government was given to the Transvaal and the Orange Free State. The four states formed into a union and the South Africa Act passed by the British parliament in 1909 provided for a Union Parliament at Cape Town. The Union of South Africa came into being in May 1910. 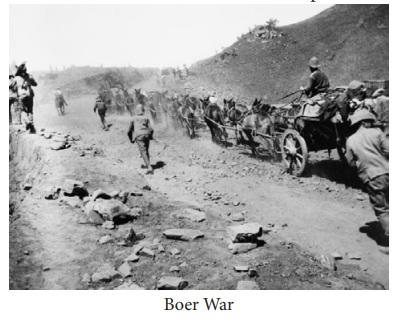 The descendents of original Dutch settlers of South Africa, also known as Afrikaners, were called Boers. Their language is Afrikaans. 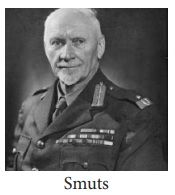 The Afrikaners pursued a harsher, racist policy towards the blacks and the minority Indians. In 1923 an Act was passed to confine the native residents to certain parts of towns. Already an Act of 1913 had segregated black and white farmers, which made it impossible for the blacks to acquire land in most parts of the country. The 1924 elections were won by the National Party with the support of the Labour movement, composed mainly of white miners. The Act passed in 1924 prevented blacks from striking work and from joining trade unions. In the Cape Province the voting right to blacks was abolished. Native Blacks suffered in all spheres: social, economic and politics.

Apartheid, which means separateness, became the racial policy of the Nationalist Party in 1947. From 1950 onwards a series of laws came to be enforced. The whole country was divided into separate areas for the different races.

Marriage between white and non-white was forbidden. Nearly all schools were brought under government control so that education different from that of the Whites could be implemented for Africans. University education was also segregated. Apartheid is based on the belief that the political equality of White and Black in South Africa would mean Black rule. The ANC which fought the practice of racism was banned and its leader Nelson Mandela was put behind bars. Mounting pressure at the global level helped to end the racist regime in South Africa. In 1990 the ban on ANC was lifted and Mandela freed after 27 years. In the elections held subsequently the Africans were allowed to vote and ANC won the election and Mandela became the first black president of South Africa. Even though apartheid was dismantled the Whites completely dominate the economic sphere.