Indo-China (today’s Cambodia, Laos and Vietnam) had shown its discontent right from the beginning of the French occupation (1887). While the Indo-Chinese resisted the imposition of French language and culture, they learned from them the ideas of revolution. During the First World War about 100,000 Indo-Chinese fought in France and returned with first-hand knowledge of how the French had fought and suffered during the War. Communist ideas from mainland China were also a major influence. Many became convinced that the considerable wealth of Indo-China was benefiting only the colonial power.

Decolonisation is a process through which colonial powers transferred institutional and legal control over their colonies to the indigenous nationalist governments.

The Emergence of Viet Minh

The mainstream political party in Indo-China was the Vietnam Nationalist Party. Formed in 1927, it was composed of the wealthy and middle class sections of the population. In 1929 the Vietnamese soldiers mutinied, and there was a failed attempt to assassinate the French Governor-General. This was followed by a large scale peasant revolt led by the Communists. The revolt was crushed followed by what is called “White Terror.” Thousands of rebels were killed. 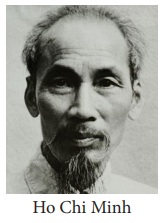 Ho Chi Minh (1890-1969) was born in Tongking. When Ho Chi Minh was twenty one, he went to Europe. After working as a cook in a London hotel, he went to Paris. In the Paris peace conference, he lobbied for the independence for Vietnam. His articles in newspapers and especially the pamphlet, French Colonialism on Trial, made him well known as a Vietnam nationalist. In 1921 he became a founder-member of the French Communist party. Two years later he went to Moscow and learnt revolutionary techniques then. In 1925, he founded the Revolutionary Youth Movement.

After the White Terror, Ho Chi Minh left for Moscow and spent the 1930s in Moscow and China. When France was defeated by Germany in 1940, Ho Chi Minh and his lieutenants used this turn of events to advance the Vietnamese cause. Crossing over the border into Vietnam in January 1941, they organized the League for the Independence of Vietnam, or Viet Minh. This gave renewed emphasis to a distinct Vietnamese nationalism.

(b) Decolonisation in India

The decolonization process started in India from the beginning of the twentieth century with the launch of the Swadeshi Movement in 1905. The outbreak of the First World War brought about rapid political as well as economic changes. In 1919, the Government of India Act introduced Dyarchy that provided for elected provincial assemblies as well as for Indian ministers to hold certain portfolios under Transferred Subjects. The Indian National Congress rejected Dyarchy and decided to boycott the legislature.

Lack of Measures to Industrialise India

Despite the discriminating protection given to certain select industries such as sugar, cement, and chemicals, there was no change in the colonial economic policy. But in the case of indigenous industries, support was only in the form of providing “technical advice and education, and the establishment of pioneer factories in new industries”. However, even this policy was soon abandoned as many British enterprises were opposed to this .

Impact of Depression on Indian Agriculture

The ‘Great Depression’ also dealt a death blow to Indian agriculture and the indigenous manufacturing sector. The value of farm produce, declined by half while the land rent to be paid by the peasant remained unchanged. In terms of prices of agricultural commodities, the obligation of the farmers to the state doubled. The great fall in prices prompted Indian nationalists to demand protection for the internal economy. The 1930s saw the emergence of the Indian National Congress as a militant mass movement.

The British had to appease the Indian nationalists and the outcome was the passage of the Government of India Act, 1935. This provided for greater power to the local governments and the introduction of direct elections. In the 1937 elections the Congress won a resounding victory in most of the provinces. However the decision of Britain to involve India in the Second World War, without consulting the popular Congress ministries, forced the latter to resign from office.