Anesthesia for Surgery in the Posterior Fossa

Anesthesia for Surgery in the Posterior Fossa

Infratentorial masses can obstruct CSF flow through the fourth ventricle or the cerebral aqueduct of Sylvius. Small but critically located lesions can mark-edly increase ICP. In such cases, a ventriculostomy is often performed under local anesthesia to decrease ICP prior to induction of general anesthesia.

Operations in the posterior fossa can injure vital circulatory and respiratory brainstemcenters and cranial nerves or their nuclei. Such inju-ries may occur as a result of direct surgical trauma or ischemia from retraction or other interruptions of the blood supply. Damage to respiratory centers is said to nearly always produce circulatory changes; therefore, abrupt changes in blood pressure, heart rate, or cardiac rhythm should alert the anesthesiolo-gist to the possibility of such an injury. Such changes should be communicated to the surgeon. Isolated damage to respiratory centers may rarely occur with-out premonitory circulatory signs during operations in the floor of the fourth ventricle. Historically, some clinicians have employed spontaneous ventilation during these procedures as an additional monitor of brain function. At completion of the surgery, brain-stem injuries may present as an abnormal respiratory pattern or an inability to maintain a patent airway following extubation. Monitoring brainstem audi-tory evoked potentials may be useful in preventing eighth nerve damage during resections of acoustic neuromas. Electromyography is also used to avoid injury to the facial nerve, but requires incomplete neuromuscular blockade intraoperatively.

Although most explorations of the posterior fossa can be performed with the patient in either a modi-fied lateral or prone position, the sitting position may be preferred by some surgeons.

The patient is actually semirecumbent in the standard sitting position ( Figure27–1); the back is elevated to 60°, and the legs are elevated with the knees flexed. The head is fixed in a three-point holder with the neck flexed; the arms remain at the sides with the hands resting on the lap.Careful positioning and padding helps avoid injuries. Pressure points, such as the elbows, ischial spines, heels, and forehead, must be pro-tected. Excessive neck flexion has been associated with swelling of the upper airway (due to venous 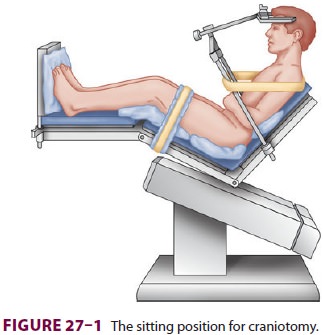 obstruction), and, rarely, quadriplegia (due to com-pression of the cervical spinal cord). Preexisting cer-vical spinal stenosis probably predisposes patients to the latter injury.

The sitting position increases the likelihood of pneu-mocephalus. In this position, air readily enters the subarachnoid space, as CSF is lost during surgery. In patients with cerebral atrophy, drainage of CSF is marked; air can replace CSF on the surface of the brain and in the lateral ventricles. Expansion of a pneumocephalus following dural closure can com-press the brain. Postoperative pneumocephalus can cause delayed awakening and continued impairment of neurological function. Because of these concerns, nitrous oxide is rarely used for sitting craniotomies. (see also below).

Venous air embolism can occur when the pressure within an open vein is subatmospheric. These conditions may exist in any position (and during any procedure) whenever the wound is above the level of the heart. The incidence of venous air embolism is greater during sitting craniotomies (20% to 40%) than in craniotomies in any otherposition. Entry into large cerebral venous sinuses increases the risk.

The physiological consequences of venous air embolism depend on the volume and the rate of air entry and whether the patient has a right-to-left intra-cardiac shunt (eg, patent foramen ovale [10% to 25% incidence]). The latter are important because they can facilitate passage of air into the arterial circulation (paradoxical air embolism). Modest quantities of air bubbles entering the venous system ordinarily lodge in the pulmonary circulation, where they are eventu-ally absorbed. Small quantities of embolized air are well tolerated by most patients. When the amount entrained exceeds the rate of pulmonary clear-ance, pulmonary artery pressure rises progressively. Eventually, cardiac output decreases in response to increases in right ventricular afterload. Preexisting cardiac or pulmonary disease enhances the effects of venous air embolism; relatively small amounts of air may produce marked hemodynamic changes. Nitrous oxide, by diffusing into the bubbles and increasing their volume, can markedly accentuate the effects of even small amounts of entrained air. The dose for lethal venous air embolism in animals receiving nitrous oxide anesthesia is one-third to one-half that of control animals not receiving nitrous oxide.

Definitive signs of venous air embolism are often not apparent until large volumes of air have been entrained. A decrease in end-tidal CO 2 or arterial oxygen saturation might be noticed prior to hemodynamic changes. Arterial blood gas val-ues may show only slight increases in Paco2 as a result of increased pulmonary dead space (areas with normal ventilation but decreased perfusion). Conversely, major hemodynamic manifestations, such as sudden hypotension, can occur well before hypoxemia is noted. Moreover, large amounts of intracardiac air impair tricuspid and pulmonic valve function and can produce sudden circulatory arrest by obstructing right ventricular outflow.

Paradoxic air embolism can result in a stroke or coronary occlusion, which may be apparent only postoperatively. Paradoxic air emboli are more likely to occur in patients with right-to-left intracardiac shunts, particularly when the nor-mal transatrial (left > right) pressure gradient is reversed. Some studies suggest that a right > left pressure gradient can develop at some time dur-ing the cardiac cycle, even when the overall mean gradient remains left > right.

A properly positioned central venous catheter can be used to aspirate entrained air, but there is only limited evidence that this influences outcomes after venous air embolism. Some clinicians have consid-ered right atrial catheterization mandatory for sit-ting craniotomies, but this is a minority viewpoint.

Optimal recovery of air following venous air embolism is provided by a multiorificed catheter positioned at the junction between the right atrium and the superior vena cava. Confirmation of correct catheter positioning can be accomplished by intravascular electrocardiography, radiography, or transesophageal echocardiography (TEE). Intra-vascular electrocardiography is accomplished by using the saline-filled catheter as a “V” lead. Correct high atrial position is indicated by the appearance of a biphasic P wave. If the catheter is advanced farther into the heart, the P wave changes from a biphasic to a undirectional deflection. A right ventricular or pulmonary artery waveform may also be observed when the catheter is connected to a pressure transducer and advanced too far.

B. Monitoring for Venous Air Embolism

The most sensitive monitors available should be used. Detecting even small amounts of venous air embo-lism is important because it allows surgical control of the entry site before additional air is entrained. Currently, the most sensitive intraoperative moni-tors are TEE and precordial Doppler sonography. These monitors can detect air bubbles as small as 0.25 mL. TEE has the added benefit of detecting the volume of the bubbles and any transatrial passage through a patent foramen ovale, as well as evaluating any effect venous air embolism may have on cardiac function. Doppler methods employ a probe over the right atrium (usually to the right of the sternum and between the third and sixth ribs). Interruption of the regular swishing of the Doppler signal by spo-radic roaring sounds indicates venous air embolism. Changes in end-tidal respiratory gas concentrations are less sensitive but are important monitors that can also detect venous air embolism before overt clini-cal signs are present. Venous air embolism causes a sudden decrease in end-tidal CO2 tension in pro-portion to the increase in pulmonary dead space; however, decreases can also be seen with hemody-namic changes unrelated to venous air embolism, such as decreased cardiac output. A reappearance (or increase) of nitrogen in expired gases may also be seen with venous air embolism. Changes in blood pressure and heart sounds (“mill wheel” murmur) are late manifestations of venous air embolism.

·        The surgeon should be notified so that he or she can flood the surgical field with saline or pack it with wet gauzes and apply bone wax to the skull edges until the entry site is identified and occluded.

·        Nitrous oxide (if used) should be discontinued, and the inhalation anesthetic should be delivered in 100% oxygen.

·        Bilateral jugular vein compression, by increasing cranial venous pressure, may slow air entrainment and cause back bleeding, which might help the surgeon identify the entry point of the embolus.

·        Some clinicians advocate PEEP to increase cerebral venous pressure; however, reversal of the normal transatrial pressure gradient may promote paradoxic embolism in a patient with incomplete closure of the foramen ovale.

·        If the above measures fail, the patient should be placed in a head-down position, and the wound should be closed quickly.