Head injuries are a contributory factor in up to 50% of deaths due to trauma.

Head injuries are a contributory factor in up to 50% of deaths due to trauma. Most patients with head trauma are young, and many (10% to 40%) have associated intraabdominal or intrathoracic injuries, long bone fractures, and/or spinal inju-ries. The outcome from a head injury is dependent not only on the extent of the neuronal damage at the time of injury, but also on the occurrence of any secondary insults. These additional insults include: (1) systemic factors such as hypoxemia, hypercapnia, or hypotension; (2) formation and expansion of an epidural, subdural, or intracerebral hematoma; and (3) sustained intracranial hyper-tension. Surgical and anesthetic management of these patients is directed at preventing these sec-ondary insults. The Glasgow Coma Scale (GCS) score (Table 27–2) generally correlates well with the severity of injury and outcome. A GCS score of 8 or less on admission is associated with approxi-mately 35% mortality. Evidence of greater than a 5-mm midline shift (on imaging) and ventricular compression on imaging are associated with sub-stantially increased morbidity. 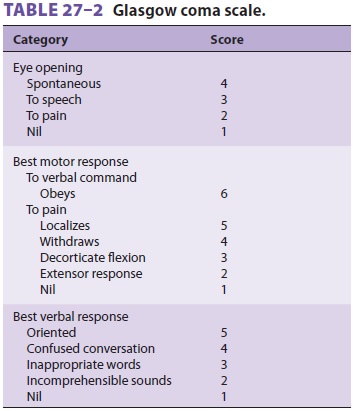 with subdural or epidural hematomas. Basilar skull fractures may be associated with CSF rhinorrhea, pneumocephalus, cranial nerve palsies, or even a cavernous sinus–carotid artery fistula. Depressed skull fractures often present with an underlying brain contusion. Contusions may be limited to the surface of the brain or may involve hemorrhage in deeper hemispheric structures or the brainstem. Deceleration injuries often produce both coup (fron-tal) and contrecoup (occipital) lesions. Epidural and subdural hematomas can occur as isolated lesions, as well as in association with cerebral contusions (more commonly with subdural than epidural lesions).

Operative treatment is usually elected for depressed skull fractures; evacuation of epidural, subdural, and some intracerebral hematomas; and debridement of penetrating injuries. Decompressive craniectomy is used to provide room for cerebral swelling. The cranium is subsequently reconstructed following resolution of cerebral edema.

ICP monitoring is usually indicated in patients with lesions associated with intracranial hyperten-sion: large contusions, mass lesions, intracerebral hemorrhage, or evidence of edema on imaging studies. ICP monitoring should also be considered in patients with signs of intracranial hypertension who are undergoing nonneurological procedures. Intracranial hypertension should be treated with moderate hyperventilation, mannitol, pentobar-bital, or propofol Studies suggest that sustained increases in ICP of greater than 60 mm Hg result in severe disability or death. Unlike treatment fol-lowing spinal cord trauma, multiple randomized trials have failed to detect the efficacy of early use of large doses of glucocorticoids in patients with head trauma.

Anesthetic care of patients with severe head trauma begins in the emergency department. Measures to ensure patency of the airway, adequacy of ventila-tion and oxygenation, and correction of systemic hypotension should go forward simultaneously with neurological and trauma surgical evaluation. Airway obstruction and hypoventilation are common. Up to 70% of such patients have hypoxemia, which may be complicated by pulmonary contusion, fat emboli, or neurogenic pulmonary edema. The latter is attrib-uted to marked systemic and pulmonary hyper-tension secondary to intense sympathetic nervous system activity. Supplemental oxygen should be given to all patients while the airway and ventilation are evaluated. All patients must be assumed to have a cervical spine injury (up to 10% incidence) until the contrary is proven radiographically. Patients with obvious hypoventilation, an absent gag reflex, or a persistent score below 8 on the GCS (Table 27–2) require tracheal intubation and hyperventilation. All other patients should be carefully observed for deterioration.

All patients should be regarded as having a full stomach and should have cricoid pressure applied during ventilation and tracheal intubation. In-line stabilization should be used during airway manip-ulation to maintain the head in a neutral position, unless radiographs confirm that there is no cervicalspine injury. Following preoxygenation and hyper-ventilation by mask, the adverse effects of intuba-tion on ICP are blunted by prior administration of propofol, 1.5–3.0 mg/kg, and a rapid-onset NMB. Succinylcholine may produce mild and transient increases in ICP in patients with closed head injury; however, the necessity for expeditious airway man-agement trumps these concerns. Rocuronium is often used to facilitate intubation. Video laryngos-copy performed with in-line stabilization generally permits neutral position intubation of the trauma patient. An intubating bougie should be available to facilitate tube placement. If a difficult intubation is encountered with video laryngoscopy, fiberoptic or other techniques (eg, intubating LMA) can be attempted. If airway attempts are unsuccessful, a surgical airway should be obtained. Blind nasal intu-bation is contraindicated in the presence of a basilar skull fracture, which is suggested by CSF rhinorrhea or otorrhea, hemotympanum, or ecchymosis into periorbital tissues (raccoon sign) or behind the ear (Battle’s sign).

Hypotension in the setting of head trauma is nearly always related to other associated injuries (often intraabdominal). Bleeding from scalp lacerations may be responsible in children. Hypotension may be seen with spinal cord injuries because of the sympathectomy associated with spinal shock. In a patient with head trauma, correction ofhypotension and control of any bleeding take pre-cedence over radiographic studies and definitive neurosurgical treatment because systolic arterial blood pressures of less than 80 mm Hg predict a poor outcome. Glucose-containing or hypotonic solutions should not be used (see above). Other-wise, a mix of colloid, crystalloid, and blood prod-ucts can be administered as necessary. Massive blood loss in the patient with multiple injuries should result in activation of a massive transfusion protocol to provide a steady supply of platelets, fresh frozen plasma, and packed red blood cells. Invasive monitoring of arterial pressure, central venous pressure, and ICP are valuable, but should not delay diagnosis and treatment. Arrhythmias and electrocardiographic abnormalities in the T wave, U wave, ST segment, and QT interval are common following head injuries, but are not neces-sarily associated with cardiac injury; they likely represent altered autonomic function.

The choice between operative and medical manage-ment of head trauma is based on radiographic and clinical findings. Patients should be stabilized prior to any CT or other imaging studies. Critically ill patients should be closely monitored during such studies. Restless or uncooperative patients may additionally require general anesthesia. Sedation without control of the airway should generally be avoided because of the risk of further increases in ICP from hypercapnia or hypoxemia.

Anesthetic management is generally similar to that for other mass lesions associated with intracranial hypertension. Management of the airway is dis-cussed above. Invasive monitoring should be estab-lished, if not already present, but should not delay surgical decompression in a rapidly deteriorating patient.

Anesthetic technique and agents are designed to preserve cerebral perfusion and mitigate increases in intracranial pressure. Hypotension may occur after induction of anesthesia as a result of the combined effects of vasodilation and hypovolemia and should be treated with an α-adrenergic agonist and volume infusion if necessary. Subsequent hypertension is common with surgical stimulation, but may also occur with acute elevations in ICP. The latter may be associated with bradycardia (Cushing reflex).

Hypertension can be treated with additional doses of the induction agent, with increased concen-trations of an inhalation anesthetic or vasodilators. β-Adrenergic blockade is usually effective in con-trolling hypertension associated with tachycardia. CPP should be maintained between 70 and 110 mm Hg. Vasodilators should be avoided until the durais opened. Hyperventilation to a Paco2<30 should be avoided in trauma patients to avoid excessive decreases in oxygen delivery.

Disseminated intravascular coagulation occa-sionally may be seen with severe head injuries. Such injuries cause the release of large amounts of brain thromboplastin and may also be associated with the acute respiratory distress syndrome. Pulmonary aspiration and neurogenic pulmonary edema may also be responsible for deteriorating lung function. PEEP can be applied on the ventilator. When PEEP is used, ICP monitoring can be useful to confirm an adequate CPP. Diabetes insipidus, characterized by excessive dilute urine, is frequently seen following injuries to the pituitary stalk. Other likely causes of polyuria should be excluded and the diagnosis con-firmed by measurement of urine and serum osmo-lality prior to treatment with fluid restriction and vasopressin Gastrointestinal bleeding is common in patients not receiving prophylaxis; it is usually due to stress ulceration.

The decision whether to extubate the trachea at the conclusion of the surgical procedure depends on the severity of the injury, the presence of concomi-tant abdominal or thoracic injuries, preexisting ill-nesses, and the preoperative level of consciousness. Young patients who were conscious preoperatively may be extubated following the removal of a local-ized lesion, whereas patients with diffuse brain injury should remain intubated. Moreover, persis-tent intracranial hypertension requires continued paralysis, sedation, and hyperventilation.