Saccular aneurysms and AVMs are common causes of nontraumatic intracranial hemorrhages. Surgical or interventional neuroradiologic treat-ment may be undertaken either electively to pre-vent hemorrhage or emergently to prevent further complications once hemorrhage has taken place. Other nontraumatic hemorrhages (eg, from hyper-tension, sickle cell disease, or vasculitis) are usually treated medically.

Cerebral aneurysms typically occur at the bifurca-tion of the large arteries at the base of the brain; most are located in the anterior circle of Willis. Approximately 10% to 30% of patients have more than one aneurysm. The general incidence of sac-cular aneurysms in some estimates is reported to be 5%, but only a minority of those with aneurysms will have complications. Rupture of a saccular aneurysm is the most common cause of subarach-noid hemorrhage. The acute mortality following rupture is approximately 10%. Of those that sur-vive the initial hemorrhage, about 25% die within 3 months from delayed complications. Moreover, up to 50% of survivors are left with neurological deficits. As a result, the emphasis in management is on prevention of rupture. Unfortunately, most patients present only after rupture has already occurred.

Patients may present with prodromal symptoms and signs suggesting progressive enlargement. The most common symptom is headache, and the most common physical sign is a third-nerve palsy. Other manifestations could include brainstem dysfunction, visual field defects, trigeminal nerve dysfunction, cavernous sinus syndrome, seizures, and hypothalamic–pituitary dysfunction. The most commonly used techniques to diagnose an aneu-rysm are MRI angiography, angiography, and heli-cal CT angiography. Following diagnosis, patients are brought to the operating room, or more likely the radiology suite, for elective clipping or oblit-eration of the aneurysm. Most patients are in the 40- to 60-year-old age group and in otherwise good health. 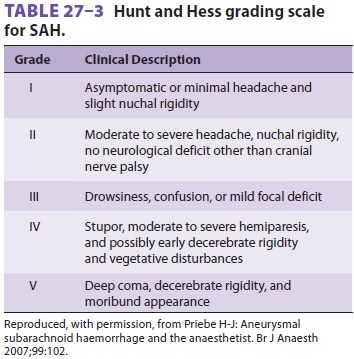 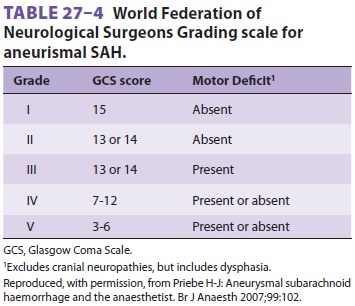 occur and may result from a sudden rise in ICP and precipitous drop in CPP. If ICP does not decrease rapidly after the initial sudden increase, death usu-ally follows. Large blood clots can cause focal neu-rological signs in some patients. Minor bleeding may cause only a mild headache, vomiting, and nuchal rigidity. Unfortunately, even minor bleed-ing in the subarachnoid space seems to predispose to delayed complications. The severity of subarach-noid hemorrhage (SAH) is graded according to the Hunt and Hess scale (Table27–3), as well as the World Federation of Neurological Surgeons Grading Scale of SAH ( Table27–4). The Fisher grading scale, which uses CT to assess the amount of blood detected, gives the best indication of the likeli-hood of the development of cerebral vasospasm and patient outcome ( Table27–5).

Delayed complications include cerebral vaso-spasm, rerupture, and hydrocephalus. Cerebral vasospasm occurs in 30% of patients (usually after 4–14 days) and is a major cause of morbidity and mortality. Manifestations of vasospasm are due to cerebral ischemia and infarction and depend on the severity and distribution of the involved ves-sels. The Ca2+ channel antagonist nimodipine may antagonize vasospasm. Both transcranial Doppler and brain tissue oxygen monitoring can be used to 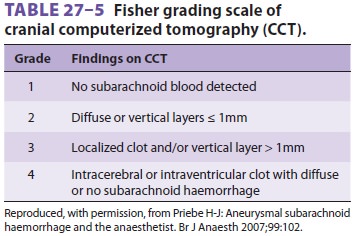 guide vasospasm therapy (Figure27–2). Increased velocity of flow >200cm/sec is indicative of severe spasm. The Lindegaard ratio compares the blood velocity of the cervical carotid artery with that of the middle cerebral artery. A ratio >3 is likewise indica-tive of severe spasm. Brain tissue oxygen tension less than 20 mm Hg is also worrisome. In patients with symptomatic vasospasm with an inadequate response to nimodipine, intravascular volume expansion and induced hypertension (“triple H” therapy: hypervolemia, hemodilution, and hyper-tension) are added as part of the therapeutic regi-men. Refractory vasospasm may be treated with infusion of papaverine, infusion of nicardipine, or angioplasty. However, radiologic improvement in the vessel diameter does not necessarily correlate with an improvement in clinical status. 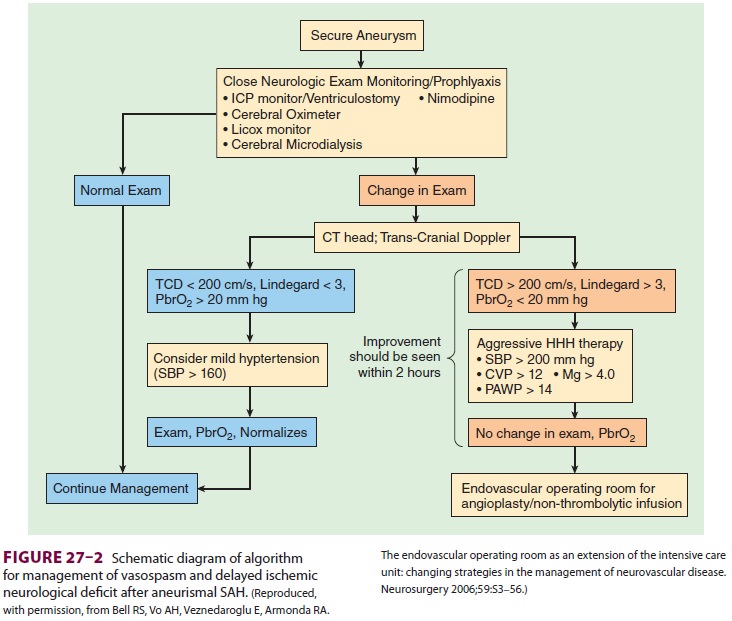 In addition to assessing neurological findings, the preoperative evaluation should include a search for coexisting diseases, such as hypertension and renal, cardiac, or ischemic cerebrovascular disease. Electrocardiographic abnormalities are commonly seen in patients with subarachnoid hemorrhage, but do not necessarily reflect underlying heart dis-ease. However, increases of cardiac troponin during SAH are associated with myocardial injury and may herald a poor outcome. Most conscious patients with normal ICP are sedated following rupture to prevent rebleeding; such sedation should be con-tinued until induction of anesthesia. Patients with persistent elevation in ICP should receive little or no premedication to avoid hypercapnia.

Aneurysm surgery can result in exsanguinating hemorrhage as a consequence of rupture or rebleed-ing. Blood should be available prior to the start of these operations.

Regardless of the anesthetic technique emplo-yed, anesthetic management should focus on pre-venting rupture (or rebleeding) and avoiding factors that promote cerebral ischemia or vasospasm.

Intraarterial and central venous pressure monitoring are useful. Sudden increases in blood pressure with tracheal intubation or surgical stimulation should be avoided. Judicious intravascular volume loading permits surgical levels of anesthesia without exces-sive decreases in blood pressure. Because calcium channel blockers, angiotensin receptor blockers, and ACE inhibitors cause systemic vasodilation and reduce systemic vascular resistance, patients receiv-ing these agents preoperatively may be particularly prone to hypotension. Hyperventilation is unlikely to overcome ischemia-induced vasodilation. Once the dura is opened, mannitol is often given to facili-tate surgical exposure and reduce the need for surgi-cal retraction. Rapid decreases in ICP prior to dural opening may promote rebleeding by removing a tamponading effect on the aneurysm.

Elective (controlled) hypotension has been used in aneurysm surgery. Decreasing mean arte-rial blood pressure reduces the transmural tension across the aneurysm, making rupture (or rebleed-ing) less likely and facilitating surgical clipping. Controlled hypotension can also decrease blood loss and improve surgical visualization in the event of bleeding. The combination of a slightly head-up position with a volatile anesthetic enhances the effects of any of the commonly used hypotensive agents. Should accidental rupture of the aneurysm occur, the surgeon may request transient hypoten-sion to facilitate control of the bleeding aneurysm.

Mild hypothermia has been used to protect the brain during periods of prolonged or excessive hypo-tension or vascular occlusion; however, its efficacy has been questioned. Rarely, hypothermic circula-tory arrest is used for large basilar artery aneurysms.

Depending on neurological condition, most patients should be extubated at the end of surgery. Extubation should be handled similarly to other craniotomies (see above). A rapid awakening allows neurological evaluation in the operating room, prior to transfer to the intensive care unit.

The anesthetic concerns of patients taken for aneursymal coiling in the neurointerventional suite are similar to those of surgical interventions. General anesthesia is employed. Patients require heparin anticoagulation and radiologic contrast. Communication with the surgeon or neuroradi-ologist as to the desired activated clotting time and need for protamine reversal is essential. Moreover, anesthesia staff in the neuroradiology suite must be prepared to manipulate and monitor the blood pres-sure, as with an open surgical procedure.

AVMs cause intracerebral hemorrhage more often than subarachnoid hemorrhage. These lesions are developmental abnormalities that result in arte-riovenous fistulas; they typically grow in size with time. AVMs may present at any age, but bleed-ing is most common between 10 and 30 years of age. Other common presentations include head-ache and seizures. The combination of high blood flow with low vascular resistance can rarely result in high-output cardiac failure. Acutely, neurora-diologists try to embolize AVMs. When neuro-radiological interventions are not successful or available, surgical excision may be undertaken. Neuroradiological embolization employs various coils, glues, and balloons to obliterate the AVM. Risks include embolization into cerebral arteries feeding the normal brain, as well as systemic or pulmonary embolism.

Anesthetic management of patients undergoing surgical treatment of AVMs may be complicated by extensive blood loss. Venous access with multiple large-bore cannulas is necessary. Embolization may be carried out prior to surgery to reduce operative blood loss. Hyperventilation and mannitol may be used to facilitate surgical access. Hyperemia and swelling can develop following resection, possibly because of altered autoregulation in the remaining normal brain. Emergence hypertension is typically controlled using β1-blockers to avoid any vasodilator induced increase in CBF.