Certain trauma-related terminology must be understood and utilized in order to effectively communicate with surgeons during trauma resus-citations or surgeries in which blood loss is occur-ring.

Certain trauma-related terminology must be understood and utilized in order to effectively communicate with surgeons during trauma resus-citations or surgeries in which blood loss is occur-ring. Hemorrhage classifications I–IV, damagecontrol resuscitation, and damage control surgery are terms that quickly convey critical informa-tion between surgeons and anesthesia personnel, ensuring a common understanding of the various interventions that may be required to resuscitate a trauma or surgical patient experiencing bleed-ing. The ACS identifies four classes of hemorrhage. Understanding this classification scheme promotes more effective communication between surgeons and anesthesiologists.

Class I hemorrhage is the volume of blood thatcan be lost without hemodynamic consequence. The heart rate does not change and the blood pressure does not decrease in response to losing this volume of blood. In most circumstances, this volume repre-sents less than 15% of circulating blood volume. The typical adult has a blood volume equivalent to 70 mL/ kg. A 70-kg adult can be presumed to have nearly 5 L of circulating blood. Children are considered to have 80 mL/kg and infants, 90 mL/kg blood volume. Intravenous fluid is not required if the bleeding is controlled, as in brief, controlled bleeding encoun-tered during an elective surgical procedure.

Class II hemorrhage is the volume of blood,that, when lost, prompts sympathetic responses to maintain perfusion; this usually represents 15–30% of circulating blood volume. The diastolic blood pressure will increase (a reflection of vasoconstric-tion) and the heart rate will increase to maintain car-diac output. Intravenous fluid or colloid is usually indicated for blood loss of this volume. Transfusions may be required if bleeding continues, suggesting progression to class III hemorrhage.

Class III hemorrhage represents the volume of blood loss (30–40% of circulating blood vol-ume) that consistently results in decreased blood pressure. Compensatory mechanisms of vasocon-striction and tachycardia are not sufficient to main-tain perfusion and meet the metabolic demands of the body. Metabolic acidosis will be detected on arterial blood gas analysis. Blood transfusions are necessary to restore tissue perfusion and pro-vide oxygen to tissues. The patient may transiently respond to fluid boluses given in response to hem-orrhage; however, if bleeding persists or given time for the fluid bolus to redistribute, the blood pres-sure will decline. Surgeons should be advised when this pattern persists, particularly during elective surgical cases where the development of shock is not expected. Class III hemorrhage may prompt an intervention such as a damage control procedure .

Class IV hemorrhage represents life-threaten-ing hemorrhage. When more than 40% of circulating blood volume is lost, the patient will be unrespon-sive and profoundly hypotensive. Rapid control of bleeding and aggressive blood-based resuscitation (ie, damage control resuscitation) will be required to prevent death. Patients experiencing this degree of hemorrhage will likely develop a trauma-induced coagulopathy, require massive blood transfusion, and experience a high likelihood of death.

Coagulation abnormalities are common following major trauma, and trauma-induced coagulopathy is an independent risk factor for death. Recent prospective clinical studies suggest that in upto 25% of major trauma patients, trauma-induced coagulopathy is present shortly after injury and before any resuscitative efforts have been initiated. In one report, acute traumatic coagulopathy was only related to the presence of a severe metabolic acidosis (base deficit ≥6 mEq/L) and appeared to have a dose-dependent relationship with the degree of tissue hypoperfusion; 2% of patients with base deficits less than 6 mEq/L developed coagulopathy compared with 20% of patients with base deficits greater than 6 mEq/L. Although injury severity scores were likely high in those developing coagulopathy, only the 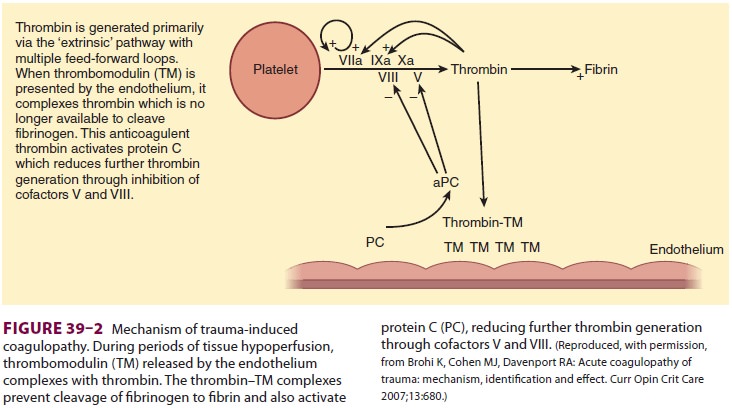 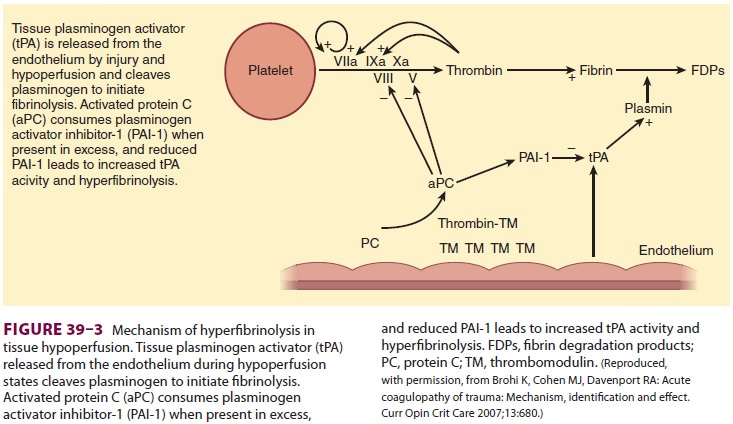 presence of the metabolic acidosis correlated to developing trauma-induced coagulopathy. Global tissue hypoperfusion appears to have a key role in the development of trauma-induced coagulopathy. During hypoperfusion, the endo-thelium releases thrombomodulin and activated protein C to prevent microcirculation thrombosis. Thrombomodulin binds thrombin, thereby prevent-ing thrombin from cleaving fibrinogen to fibrin. The thrombomodulin–thrombin complex activates protein C, which then inhibits the extrinsic coagu-lation pathway through effects on cofactors V and VIII (Figure 39–2). Activated protein C also inhibits plasminogen activator inhibitor-1 proteins, which increases tissue plasminogen activator, resulting in hyperfibrinolysis (Figure 39–3). One prospective clinical study found the following effects of hypoper-fusion on coagulation parameters: (1) progressive coagulopathy as base deficit increases; (2) increas-ing plasma thrombomodulin and falling protein C (indicating activation of the protein levels with increasing base deficit), supporting the argument that the anticoagulant effects of these proteins in the presence of hypoperfusion are related to the prolon-gation of prothrombin and partial thromboplastin times; and (3) an influence of early trauma-induced coagulopathy on mortality.

Trauma-induced coagulopathy is not solely related to impaired clot formation. Fibrinolysis is an equally important component as a result of plas-min activity on an existing clot. Tranexamic acid administration is associated with decreased bleed-ing during cardiac and orthopedic surgeries, pre-sumably because of its antifibrinolytic properties. A randomized control study involving 20,000 trauma patients with or at risk of significant bleeding found a significantly reduced risk for death from hemor-rhage when tranexamic acid therapy (loading dose, 1 g over 10 min followed by an infusion of 1 g over 8 h) was initiated within the first 3 h following major trauma. Figure 39–4 demonstrates the benefit of ini-tiating this therapy in relation to the time of injury. 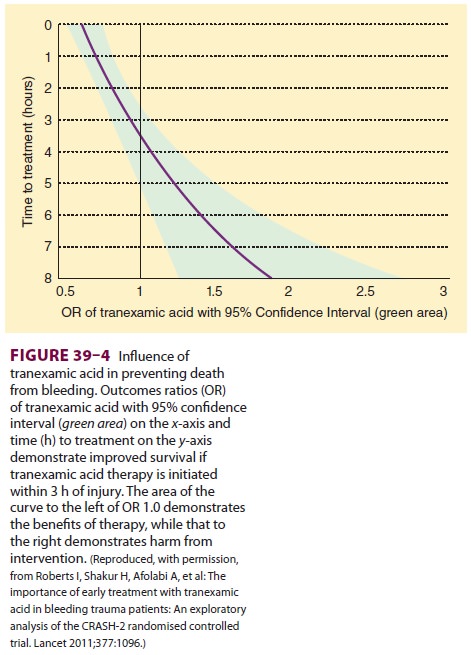 Early coagulopathy of trauma is associated with increased mortality. Administering blood products in equal ratios early in resuscitationhas become an accepted approach to correction of trauma-induced coagulopathy. This balanced approach to transfusion, 1:1:1 (red blood cell:fresh frozen plasma:platelet), is termed damage controlresuscitation. Although the 1:1:1 combinationattempts to replicate whole blood, it results in a pan-cytopenic solution with only a fraction of whole blood’s hematocrit and coagulation factor concen-tration. Red blood cells will over time improveoxygen delivery to ischemic, hypoperfused tissues. Fresh frozen plasma provides clotting factors V and VIII along with fibrinogen, which improves clotting, possibly due to overwhelming of the thrombin– thrombomodulin complex. Platelets and cryopre-cipitate, although included in the 1:1:1 massive transfusion protocol, are probably not necessary in the initial phase of resuscitation, given the normal platelet and fibrinogen levels noted in early coagu-lopathy. Additional platelet transfusions may be beneficial if the resuscitation is prolonged, as is typi-cal for most major trauma resuscitations, or if a recalcitrant coagulopathy is noted with coagulation studies. The use of crystalloid fluids in early trauma resuscitation has markedly decreased with the increased emphasis upon early blood product administration.

Most trauma centers have early-release type O-negative blood available for immediate transfu-sion to patients with severe hemorrhage. Depending on the urgency of need for transfusion, administra-tion of blood products typically progresses from O-negative to type-specific, then to crossmatched units as the acute need decreases. Patients admin-istered uncrossmatched O-negative blood are those deemed at high risk of requiring massive trans-fusion. As the amount of uncrossmatched blood administered increases beyond 8 units, attempts to return to the patient’s native blood type should not be pursued and type O blood should be continued until the patient is stabilized.

Military experience treating combat-wounded soldiers and civilians has provided great insight into trauma resuscitation and trauma-induced coagu-lopathy. As the use of blood and blood products has evolved, the 1:1:1 transfusion ratio has been uni-formly adopted to address the frequent incidence of trauma-induced coagulopathy. Retrospective analy-sis of severely wounded solders found improved survival when this transfusion protocol was utilized. Consequently, hemostatic resuscitation has been rapidly adopted by civilian trauma centers, which have reported similar survival benefits for civilian patients with severe trauma. Nevertheless, using tra-ditional definitions, this approach is not “evidence based” from randomized clinical trials.

Using hemostatic resuscitation (ie, damage control resuscitation), blood and blood products are administered preemptively to address a pre-sumed coagulopathy. Often coagulation status is not assessed until the patient stabilizes. Although this treatment approach appears to be effective in controlling trauma-induced coagulopathy, patients requiring this therapy may be exposed to unneces-sary additional units of blood or blood products. An alternative approach that relies on thromboelastog-raphy (TEG) may allow more goal-directed transfu-sion of blood and blood products and is increasingly utilized in trauma resuscitations. The formation and stability of a clot represents interactions between the coagulation cascades, platelets, and the fibrinolytic system, all of which can be demonstrated with TEG (Figure 39–5). As TEG use during trauma resus-citation becomes more routine, the current 1:1:1 hemostatic resuscitation ratio will likely undergo modification to proportionately less fresh frozen plasma, and the use of antifibrinolytic therapy will likely increase. 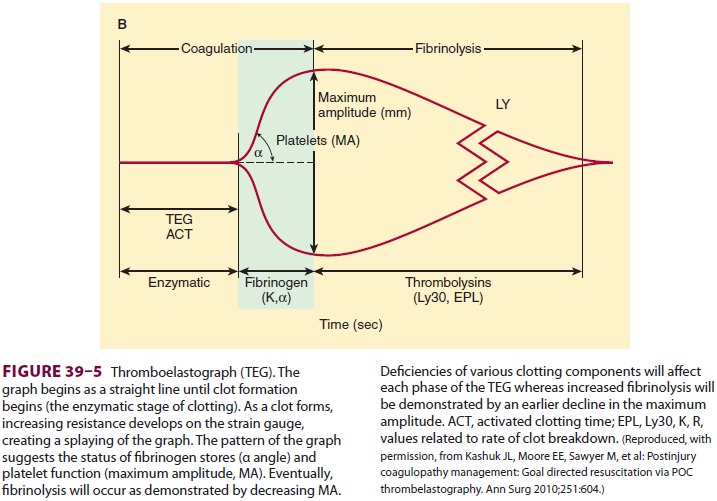 Administration of blood products must be done with consideration for potential hazards that may result from transfusion. Although blood-borne dis-eases such as acquired immunodeficiency syndrome, hepatitis B, and hepatitis C are usually thought of as the highest transfusion-related risks, the incidence of such infections has decreased 10,000-fold due to better screening tests of donors and donated units. Noninfectious transfusion reactions are now the leading complication oftransfusion and represent a more than 10-fold greater risk than blood-borne infection. Transfusion-related acute lung injury (TRALI) is the leading cause of transfusion-related death reported to the U.S. Food and Drug Administration. However, although the bleeding trauma patient is at risk for a transfusion-related reaction, that risk is minimal compared with the far greater likelihood of death from exsanguination. The most prudent approach for blood product utilization in the bleeding trauma patient is to administer the blood products that are necessary, based on laboratory studies, clinical evi-dence of significant bleeding, and the degree of hemodynamic instability that can be directly attrib-uted to hemorrhage.

It is important to establish which personnel are empowered to invoke use of the MTP, given the expense and implications for the blood bank in terms of blood inventory, personnel training and availability, and disruption of routine blood bank duties. Establishing an MTP benefits both the patient, through improved survival and fewer complications, and the institution, through more efficient and effective processes for utilizing critical blood bank resources.

Initiating an MTP for all trauma patients is impractical; however, delaying request for an MTP until the patient has undergone a thorough trauma evaluation may increase the risk of morbidity and mortality. The assessment of blood consump-tion (ABC) score is an attempt to predictwhich patients are likely to require an MTP. The ABC score assigns 1 point for the presence of each of four possible variables: (1) penetrating injury; systolic blood pressure less than 90 mmHg; (3) heart rate greater than 120 beats per minute; and

positive results of a focused assessment withsonography for trauma (FAST) evaluation. TheFAST evaluation is a bedside ultrasonography screening examination performed by surgeons and emergency department physicians to assess the presence or absence of free fluid in the perihepatic and perisplenic spaces, pericardium, and pelvis.Patients with ABC scores of 2 or higher are likely to require massive transfusion. This scoring system has been validated in multiple level 1 trauma cen-ters and is now relatively commonplace in trauma evaluations.