Anatomy of the Lymphatic System 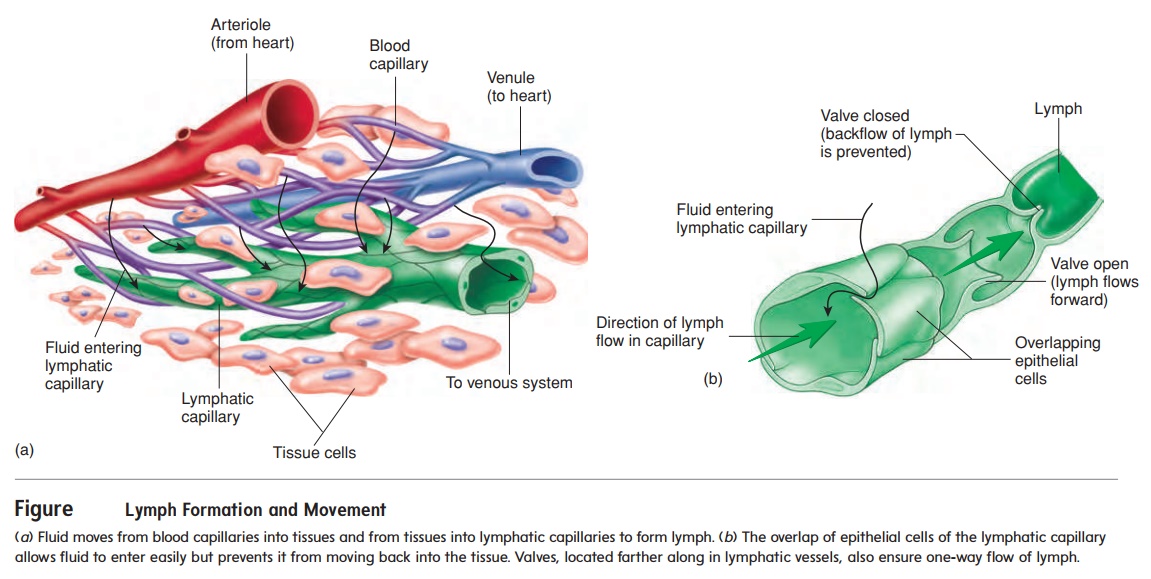 A. Describe how lymph is transported. B. Describe the structure and function of tonsils, lymph nodes, the spleen, and the thymus.

ANATOMY OF THE LYMPHATIC SYSTEM 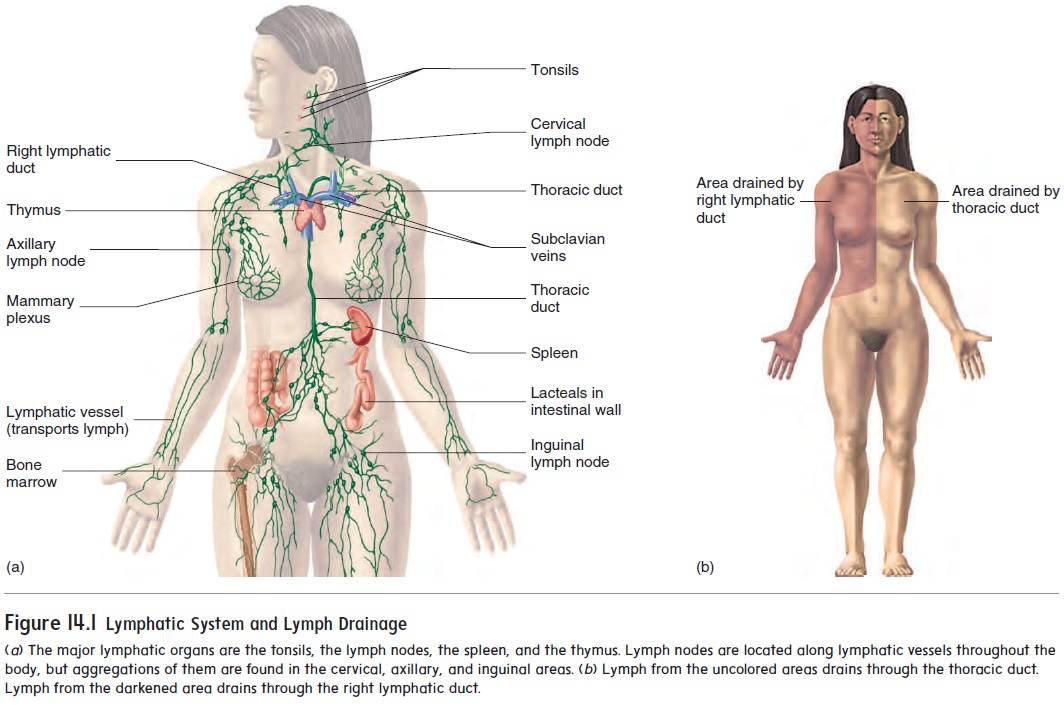 Lymphatic capillaries are present in most tissues of the body. Exceptions are the central nervous system, bone marrow, and tis-sues lacking blood vessels, such as the epidermis and cartilage. A superficial group of lymphatic capillaries drains the dermis and subcutaneous tissue, and a deep group drains muscle, the viscera, and other deep structures.

There are three groups of tonsils (figure 14.3; see figure 15.2). The palatine (pal′ ă-tı̄n; palate) tonsils are located on each side of the posterior opening of the oral cavity; these are the ones usually referred to as “the tonsils.” The pharyngeal (fă-rin′ jē-ăl) tonsil is located near the internal opening of the nasal cavity. When thepharyngeal tonsil is enlarged, it is commonly called the adenoid (ad′ ĕ-noid), or adenoids. An enlarged pharyngeal tonsil can inter- fere with normal breathing. The lingual (ling′ gwăl; tongue) tonsil is on the posterior surface of the tongue. 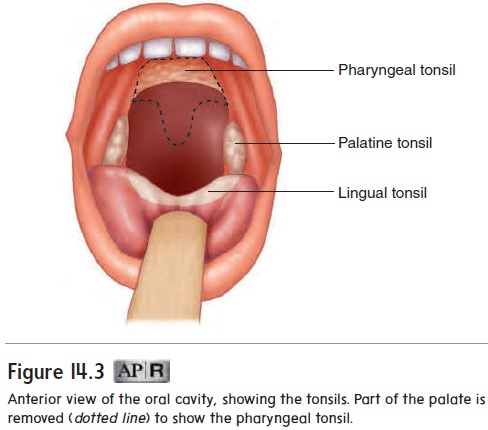 The tonsils form a protective ring of lymphatic tissue around the openings between the nasal and oral cavities and the pharynx. They protect against pathogens and other potentially harmful material entering from the nose and mouth. Sometimes the palatine or pharyngeal tonsils become chronically infected and must be removed. The lingual tonsil becomes infected less often than the decrease in size and may eventually disappear. 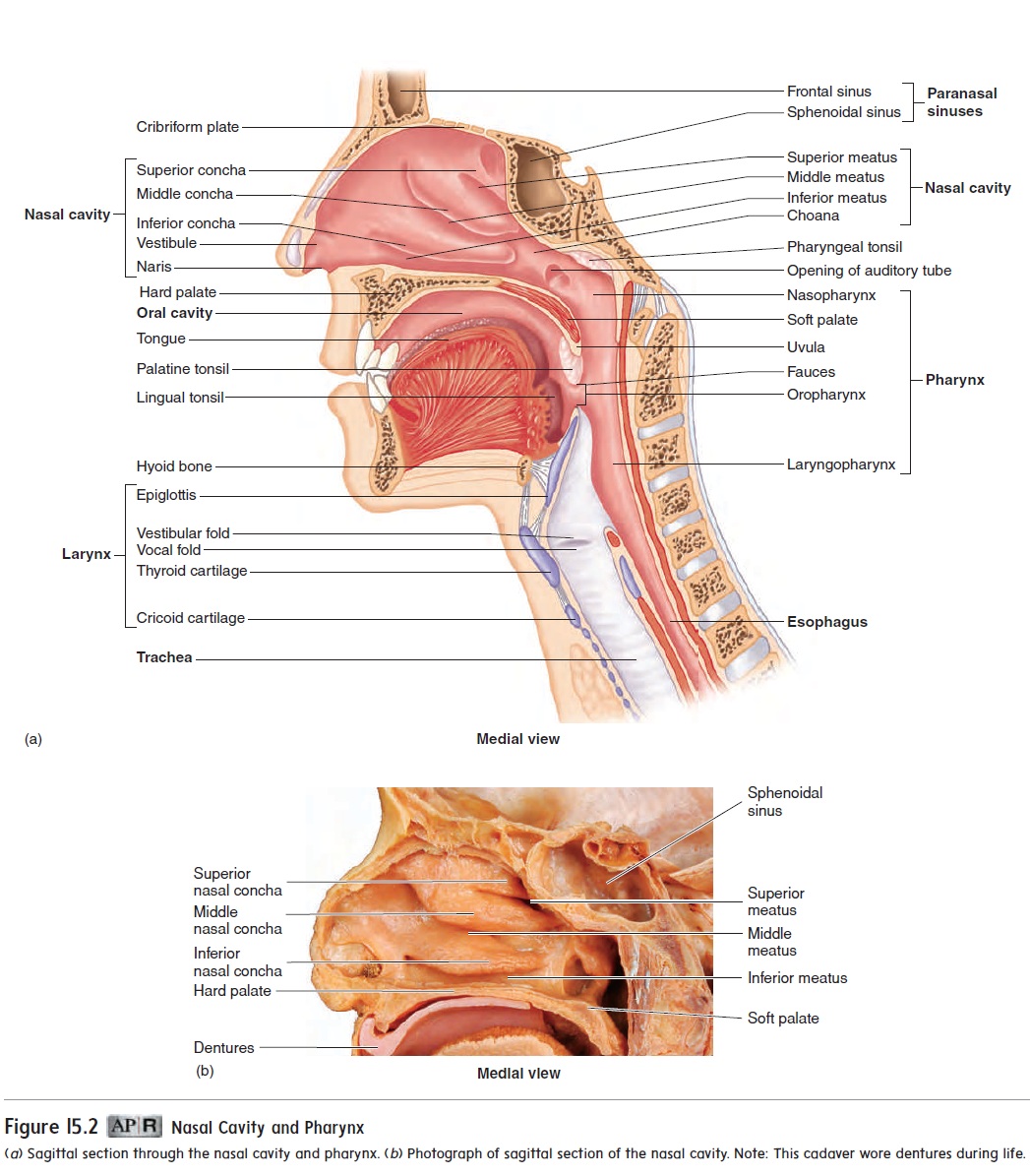 Lymph nodes are rounded structures, varying from the size of asmall seed to that of a shelled almond. Lymph nodes are distrib-uted along the various lymphatic vessels (see figure 14.1a), and most lymph passes through at least one lymph node before enter-ing the blood. Although lymph nodes are found throughout the body, there are three superficial aggregations of lymph nodes on each side of the body: inguinal nodes in the groin, axillary nodes in the axilla (armpit), and cervical nodes in the neck. 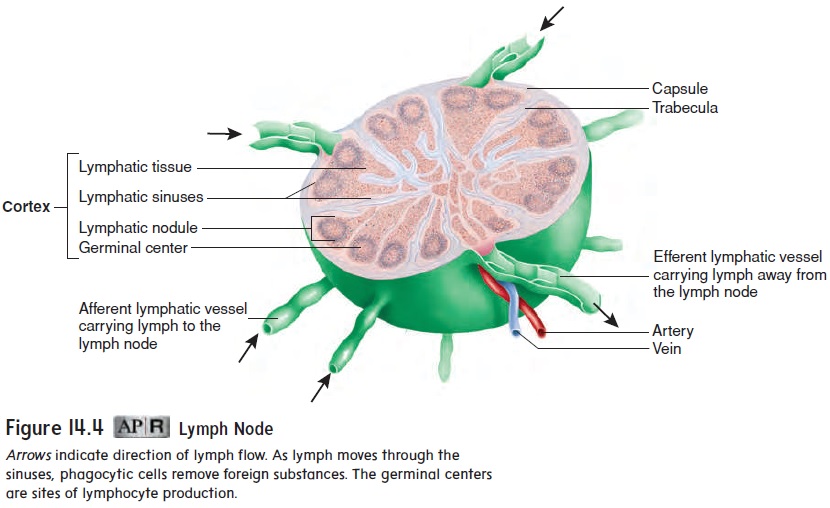 The spleen (splēn) is roughly the size of a clenched fist and is located in the left, superior corner of the abdominal cavity (fig-ure 14.5). The spleen has an outer capsule of dense connective tissue and a small amount of smooth muscle. Trabeculae from the capsule divide the spleen into small, interconnected compartments containing two specialized types of lymphatic tissue. White pulp is lymphatic tissue surrounding the arteries within the spleen. Redpulp is associated with the veins. It consists of a fibrous network,filled with macrophages and red blood cells, and enlarged capillar-ies that connect to the veins.

The spleen filters blood instead of lymph. Cells within the spleen detect and respond to foreign substances in the blood and destroy worn-out red blood cells. Lymphocytes in the white pulp can be stimulated in the same manner as in lymph nodes. Before blood leaves the spleen through veins, it passes through the red pulp. Macrophages in the red pulp remove foreign substances and worn-out red blood cells through phagocytosis.

The spleen also functions as a blood reservoir, holding a small volume of blood. In emergency situations, such as hemorrhage, smooth muscle in splenic blood vessels and in the splenic capsule can contract, allowing a small amount of blood to move out of the spleen into the general circulation.

The thymus (thi′ m̆u s) is a bilobed gland roughly triangular in shape (figure 14.6a). It is located in the superior mediastinum, the partition dividing the thoracic cavity into left and right parts. Each lobe of the thymus is surrounded by a thin connective tissue capsule. Trabeculae from the capsule divide each lobe into lobules (figure 14.6b). Near the capsule and trabeculae, the lymphocytes are numerous and form dark-staining areas called the cortex. A lighter-staining, central portion of the lobules, called the medulla, has fewer lymphocytes.

The thymus is the site for the maturation of a class of lym-phocytes called T cells (described in “Adaptive Immunity” later). Large numbers of T cells are produced in the thymus, but most degenerate. The T cells that survive the matura-tion process are capable of reacting to foreign substances. The mature T cells migrate to the medulla, enter the blood, and travel to other lymphatic tissues, where they help protect against patho-gens. Production of T cells declines later in life due to decreased function of the thymus (see “Effects of Aging on the Lymphatic System and Immunity” later).

Overview of The Lymphatic System

Figure 14.7 summarizes the processes performed by the lymphatic system. Lymphatic capillaries and vessels remove fluid from tissues and absorb lipids from the small intestine. Lymph nodes filter lymph, and the spleen filters blood. 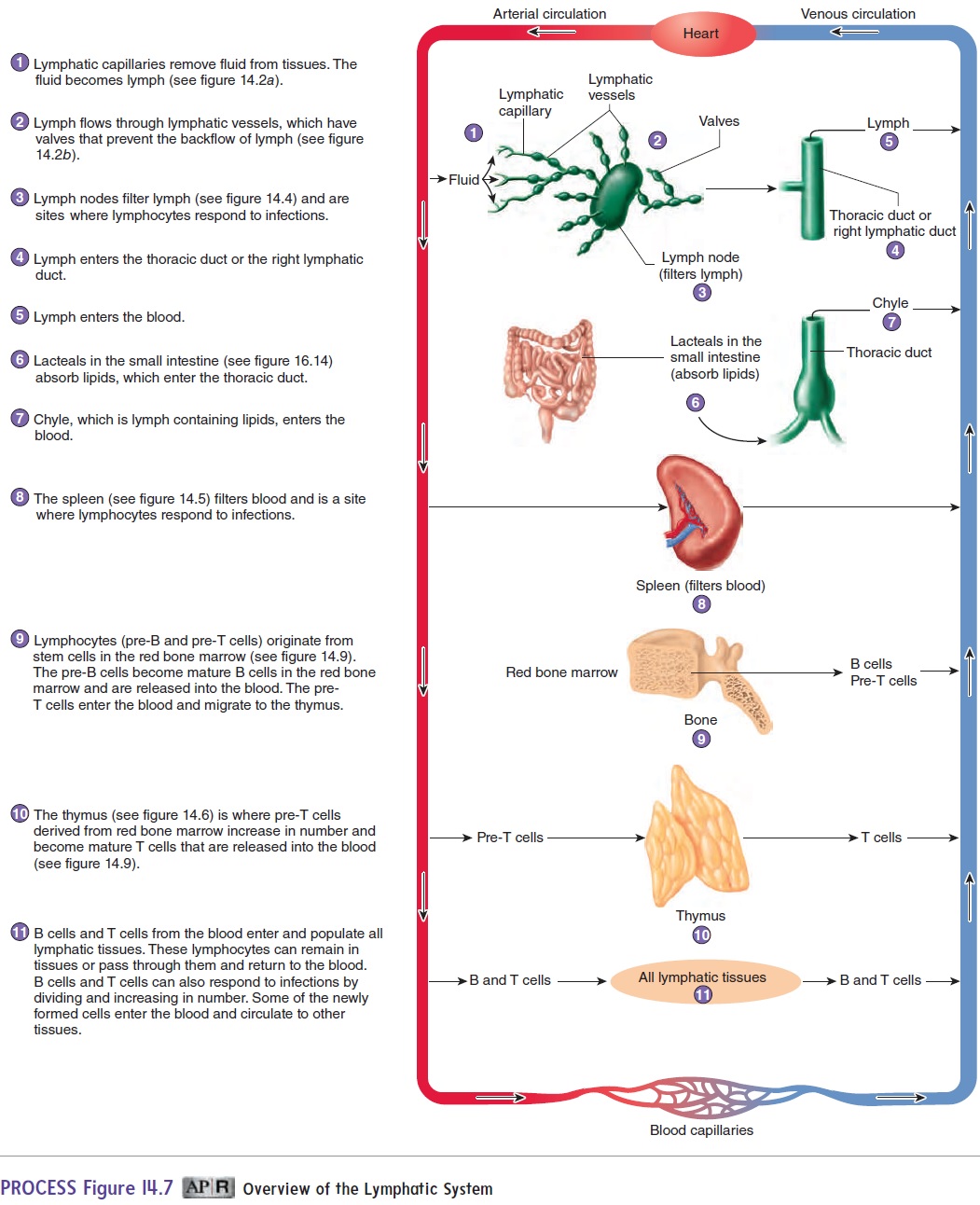