explain the four ways that adaptive immunity can be acquired.

There are four ways to acquire adaptive immunity: active natural, active artificial, passive natural, and passive artificial (figure 14.17).Active immunity results when an individual is exposed to an antigen(either naturally or artificially) and the response of the individual’s own immune system is the cause of the immunity. Passive immunity occurs when another person or an animal develops immunity andthe immunity is transferred to a nonimmune individual. Natural and artificial refer to the method of exposure or antibody transfer. Natural implies that contact with the antigen or transfer of anti-bodies occurs as part of everyday living and is not deliberate. Artificial implies that deliberate introduction of an antigen orantibody into the body has occurred. 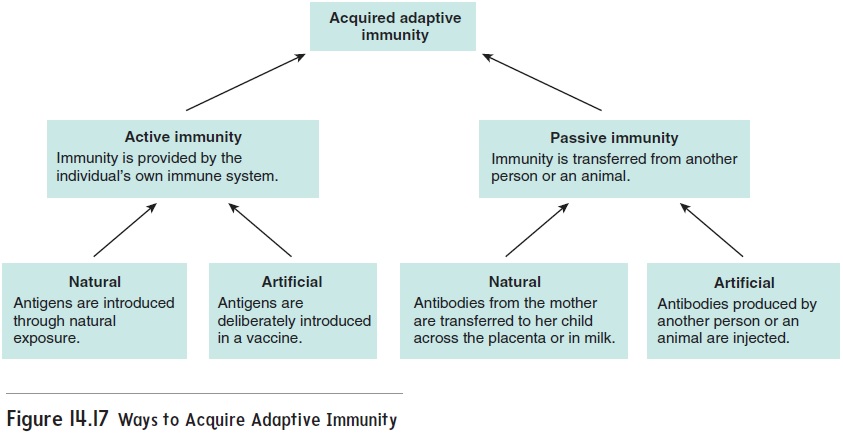 Active natural immunity results from natural exposure to anantigen, such as a disease-causing microorganism, that stimulates the immune system to respond against the antigen. Because the individual is not immune during the first exposure, he or she usually develops the symptoms of the disease.

In active artificial immunity, an antigen is deliberately introduced into an individual to stimulate the immune system. This process is called vaccination (vak′ si-nā′ shŭn), and the introduced antigen is a vaccine (vak′sēn, vak-sēn′). A vaccine is usually administered byinjection. Examples of vaccinations are the DTP injection against diphtheria, tetanus, and pertussis (whooping cough) and the MMR injection against mumps, measles, and rubella (German measles).

The vaccine usually consists of part of a pathogen, either a dead microorganism or a live, altered one. The antigen has been changed so that it will stimulate an immune response but will not cause the disease symptoms. Because active artificial immunity produces long-lasting immunity without disease symptoms, it is the preferred method of acquiring adaptive immunity.

Passive natural immunity results when antibodies are transferredfrom a mother to her child across the placenta before birth. During her life, the mother has been exposed to many antigens, either naturally or artificially, and she has antibodies against many of these antigens, which protect her and the developing fetus against disease. Some of the antibodies (IgG) can cross the placenta and enter the fetal blood. Following birth, the antibodies protect the baby for the first few months. Eventually, the antibodies break down, and the baby must rely on its own immune system. If the mother breastfeeds her baby, antibodies (IgA) in the mother’s milk may also provide some protection for the baby.

Antibodies that provide passive artificial immunity are referred to by the general term antiserum because the antibodies are found in serum, which is plasma minus the clotting factors. Antisera are available against microorganisms that cause disease, such as rabies, hepatitis, and measles; bacterial toxins, such as those that cause teta-nus, diphtheria, and botulism; and venoms from poisonous snakes and spiders.