Anatomy of the Gastrointestinal Tract 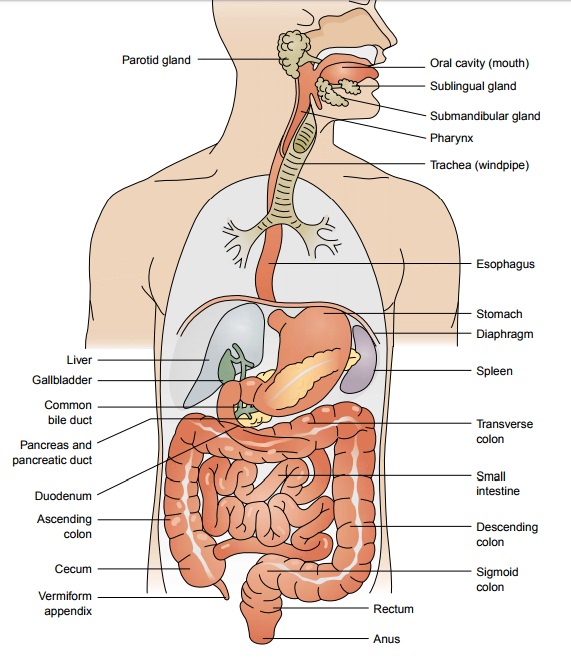 The GI tract is a 23- to 26-foot-long pathway that extends from the mouth through the esophagus, stomach, and intestines to the anus .

ANATOMY OF THE GASTROINTESTINAL TRACT

The GI tract is a 23- to 26-foot-long pathway that extends from the mouth through the esophagus, stomach, and intestines to the anus (Fig. 34-1). The esophagus is located in the mediastinum in the thoracic cavity, anterior to the spine and posterior to the trachea and heart. This collapsible tube, which is about 25 cm (10 inches) in length, becomes distended when food passes through it. It passes through the diaphragm at an opening called the diaphragmatic hiatus. 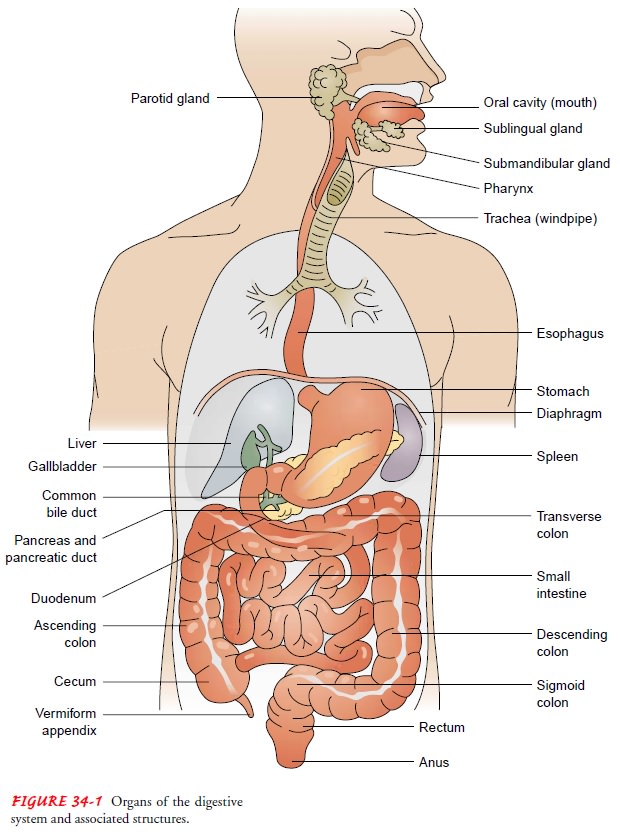 The remaining portion of the GI tract is located within the peritoneal cavity. The stomach is situated in the upper portion of the abdomen to the left of the midline, just under the left di-aphragm. It is a distensible pouch with a capacity of approximately 1500 mL. The inlet to the stomach is called the esophagogastric junction; it is surrounded by a ring of smooth muscle called the lower esophageal sphincter (or cardiac sphincter), which, on con-traction, closes off the stomach from the esophagus. The stomach can be divided into four anatomic regions: the cardia (entrance), fundus, body, and pylorus (outlet). Circular smooth muscle in the wall of the pylorus forms the pyloric sphincter and controls the opening between the stomach and the small intestine.

The small intestine is the longest segment of the GI tract, accounting for about two thirds of the total length. It folds back and forth on itself, providing approximately 7000 cm of sur-face area for secretion and absorption, the process by which nu-trients enter the bloodstream through the intestinal walls. The small intestine is divided into three anatomic parts: the upper part, called the duodenum; the middle part, called the jejunum; and the lower part, called the ileum. The common bile duct, which allows for the passage of both bile and pancreatic secre-tions, empties into the duodenum at the ampulla of Vater. The junction between the small and large intestine, the cecum, is lo-cated in the right lower portion of the abdomen. The ileocecal valve is located at this junction. It controls the passage of intesti-nal contents into the large intestine and prevents reflux of bacte ria into the small intestine. The vermiform appendix is located near this junction.

The GI tract receives blood from arteries that originate along the entire length of the thoracic and abdominal aorta. Of partic-ular importance are the gastric artery and the superior and infe-rior mesenteric arteries. Oxygen and nutrients are supplied to the stomach by the gastric artery and to the intestine by the mesen-teric arteries (Fig. 34-2). Blood is drained from these organs by veins that merge with others in the abdomen to form a large ves-sel called the portal vein. Nutrient-rich blood is then carried to the liver. The blood flow to the GI tract is about 20% of the total cardiac output and increases significantly after eating. 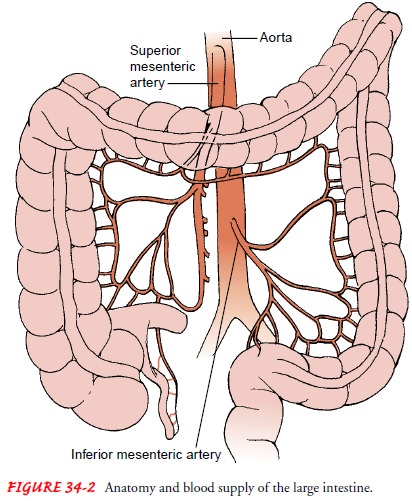