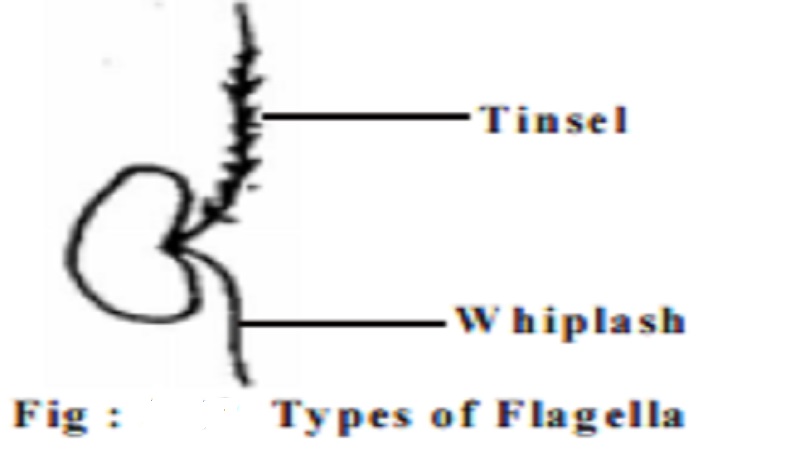 The whiplash flagellum has a smooth surface while the tinsel flagellum has fine minute hairs along the axis. The number, insertion, pattern and kind of flagella appear to be consistent in each class of algae and it is an important criterion for classification of algae. Motile cells of the Algae are typically biflagellate. When both flagella are of equal length and appearance, they are described as isokont. Heterokont forms have dissimilar flagella with reference to their length and types. Red algae(Rhodophyta) and Blue green algae(Cyanophyta) lack flagella. Each flagellum consists of two central microtubles surrounded by a peripheral layer of nine doublet microtubles. This is called 9+2 pattern of arrangement which is a characteristic feature of eukaryotic flagellum. The entire group of microtubles is surrounded by a membrane.

The thalli of algae exhibit a great range of variation in structure and organization. It ranges from microscopic unicellular forms to giant seaweeds like Macrocystis which measures up to 100 meters long. Some of them form colonies, or filaments. The unicellular form may be motile as in Chlamydomonas or non-motile as in Chlorella. Most algae have filamentous thallus. eg. Spirogyra. The filaments may be branched. These filamentous form may be free floating or attached to a substratum. Attachment of the filament is usually effected through a simple modification of the basal cell into a holdfast. Some of the Algae are macroscopic. eg. Caulerpa, Sargassum, Laminaria, Fucus etc.where the plant body is large. In Macrocystis it is differentiated into root, stem and leaf like structures.