Acute Pancreatitis - Disorders of the Pancreas

Acute pancreatitis ranges from a mild, self-limiting disorder to a severe, rapidly fatal disease that does not respond to any treatment.

Acute pancreatitis ranges from a mild, self-limiting disorder to a severe, rapidly fatal disease that does not respond to any treat-ment. Mild acute pancreatitis is characterized by edema and in-flammation confined to the pancreas. Minimal organ dysfunction is present, and return to normal usually occurs within 6 months. Although this is considered the milder form of pancreatitis, the patient is acutely ill and at risk for hypovolemic shock, fluid and electrolyte disturbances, and sepsis. A more widespread and com-plete enzymatic digestion of the gland characterizes severe acute pancreatitis. The tissue becomes necrotic, and the damage ex-tends into the retroperitoneal tissues. Local complications consist of pancreatic cysts or abscesses and acute fluid collections in or near the pancreas. Systemic complications, such as acute respira-tory distress syndrome, shock, disseminated intravascular coagu-lopathy, and pleural effusion, can increase the mortality rate to 50% or higher (Aronson, 1999).

Acute pancreatitis affects people of all ages, but the mortality rate associated with acute pancreatitis increases with advancing age. In addition, the pattern of complications changes with age. Younger patients tend to develop local complications; the incidence of multiple organ failure increases with age, possibly as a result of progressive decreases in physiologic function of major organs with increasing age. Close monitoring of major organ function (ie, lungs, kidneys) is essential, and aggressive treatment is neces-sary to reduce mortality from acute pancreatitis in the elderly.

Self-digestion of the pancreas by its own proteolytic enzymes, principally trypsin, causes acute pancreatitis. Eighty percent of patients with acute pancreatitis have biliary tract disease; how-ever, only 5% of patients with gallstones develop pancreatitis. Gallstones enter the common bile duct and lodge at the ampulla of Vater, obstructing the flow of pancreatic juice or causing a re-flux of bile from the common bile duct into the pancreatic duct, thus activating the powerful enzymes within the pancreas. Nor-mally, these remain in an inactive form until the pancreatic se-cretions reach the lumen of the duodenum. Activation of the enzymes can lead to vasodilation, increased vascular permeabil-ity, necrosis, erosion, and hemorrhage (Quillen, 2001).

The mortality rate of patients with acute pancreatitis is high (10%) because of shock, anoxia, hypotension, or fluid and elec-trolyte imbalances. Attacks of acute pancreatitis may result in complete recovery, may recur without permanent damage, or may progress to chronic pancreatitis. The patient admitted to the hospital with a diagnosis of pancreatitis is acutely ill and needs expert nursing and medical care.

Severity and mortality predictions of acute alcoholic pancre-atitis are generally assessed using Ranson’s criteria (Tierney,McPhee& Papadakis, 2001). The Acute Physiology and Chronic Health Evaluation (APACHE) grading system may also be used. Predictors of the severity of pancreatitis and its prognosis are listed in Chart 40-4. 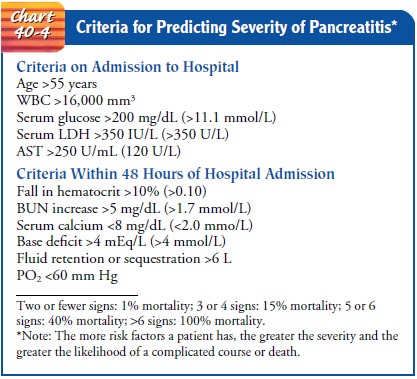 Severe abdominal pain is the major symptom of pancreatitis that causes the patient to seek medical care. Abdominal pain and ten-derness and back pain result from irritation and edema of the in-flamed pancreas that stimulate the nerve endings. Increased tension on the pancreatic capsule and obstruction of the pan-creatic ducts also contribute to the pain. Typically, the pain oc-curs in the midepigastrium. Pain is frequently acute in onset, occurring 24 to 48 hours after a very heavy meal or alcohol in-gestion, and it may be diffuse and difficult to localize. It is gen-erally more severe after meals and is unrelieved by antacids. Pain may be accompanied by abdominal distention; a poorly defined, palpable abdominal mass; and decreased peristalsis. Pain caused by pancreatitis is accompanied frequently by vomiting that does not relieve the pain or nausea.

The patient appears acutely ill. Abdominal guarding is pres-ent. A rigid or board-like abdomen may develop and is generally an ominous sign; the abdomen may remain soft in the absence of peritonitis. Ecchymosis (bruising) in the flank or around the um-bilicus may indicate severe pancreatitis. Nausea and vomiting are common in acute pancreatitis. The emesis is usually gastric in ori-gin but may also be bile-stained. Fever, jaundice, mental confu-sion, and agitation also may occur.

Hypotension is typical and reflects hypovolemia and shock caused by the loss of large amounts of protein-rich fluid into the tissues and peritoneal cavity. The patient may develop tachycar-dia, cyanosis, and cold, clammy skin in addition to hypotension. Acute renal failure is common.

The diagnosis of acute pancreatitis is based on a history of ab-dominal pain, the presence of known risk factors, physical exam-ination findings, and diagnostic findings. Serum amylase and lipase levels are used in making the diagnosis of acute pancreatitis. In 90% of the cases, serum amylase and lipase levels usually rise in excess of three times their normal upper limit within 24 hours (Tierney, McPhee & Papadakis, 2001). Serum amylase usually returns to normal within 48 to 72 hours. Serum lipase levels may remain elevated for 7 to 14 days (Braunwald et al., 2001). Uri-nary amylase levels also become elevated and remain elevated longer than serum amylase levels. The white blood cell count is usually elevated; hypocalcemia is present in many patients and correlates well with the severity of pancreatitis. Transient hyper-glycemia and glucosuria and elevated serum bilirubin levels occur in some patients with acute pancreatitis.

X-ray studies of the abdomen and chest may be obtained to differentiate pancreatitis from other disorders that may cause sim-ilar symptoms and to detect pleural effusions. Ultrasound and contrast-enhanced computed tomography scans are used to iden-tify an increase in the diameter of the pancreas and to detect pan-creatic cysts, abscesses, or pseudocysts.

Hematocrit and hemoglobin levels are used to monitor the pa-tient for bleeding. Peritoneal fluid, obtained through paracente-sis or peritoneal lavage, may contain increased levels of pancreatic enzymes. The stools of patients with pancreatic disease are often bulky, pale, and foul-smelling. Fat content of stools varies between 50% and 90% in pancreatic disease; normally, the fat content is 20%. ERCP is rarely used in the diagnostic evaluation of acute pancreatitis because the patient is acutely ill; however, it may be valuable in the treatment of gallstone pancreatitis.

Management of the patient with acute pancreatitis is directed to-ward relieving symptoms and preventing or treating complica-tions. All oral intake is withheld to inhibit pancreatic stimulation and secretion of pancreatic enzymes. Parenteral nutrition is usu-ally an important part of therapy, particularly in debilitated pa-tients, because of the extreme metabolic stress associated with acute pancreatitis (Dejong, Greve & Soeters, 2001). Nasogastric suction may be used to relieve nausea and vomiting, to decrease painful abdominal distention and paralytic ileus, and to remove hydrochloric acid so that it does not enter the duodenum and stimulate the pancreas. Histamine-2 (H2) antagonists (eg, ci-metidine [Tagamet] and ranitidine [Zantac]) may be prescribed to decrease pancreatic activity by inhibiting HCl secretion.

Adequate pain medication is essential during the course of acute pancreatitis to provide sufficient pain relief and minimize rest-lessness, which may stimulate pancreatic secretion further. Mor-phine and morphine derivatives are often avoided because it has been thought that they cause spasm of the sphincter of Oddi; meperidine (Demerol) is often prescribed because it is less likely to cause spasm of the sphincter (Porth, 2002). Antiemetic agents may be prescribed to prevent vomiting.

Correction of fluid and blood loss and low albumin levels is nec-essary to maintain fluid volume and prevent renal failure. The pa-tient is usually acutely ill and is monitored in the intensive care unit, where hemodynamic monitoring and arterial blood gas monitoring are initiated. Antibiotic agents may be prescribed if infection is present; insulin may be required if significant hyper-glycemia occurs.

Aggressive respiratory care is indicated because of the high risk for elevation of the diaphragm, pulmonary infiltrates and effusion, and atelectasis. Hypoxemia occurs in a significant number of pa-tients with acute pancreatitis even with normal x-ray findings. Respiratory care may range from close monitoring of arterial blood gases to use of humidified oxygen to intubation and me-chanical ventilation.

Placement of biliary drains (for external drainage) and stents (in-dwelling tubes) in the pancreatic duct through endoscopy has been performed to reestablish drainage of the pancreas. This has resulted in decreased pain and increased weight gain.

Although often risky because the acutely ill patient is a poor surgical risk, surgery may be performed to assist in the diagnosis of pancreatitis (diagnostic laparotomy), to establish pancreatic drainage, or to resect or débride a necrotic pancreas. The patient who undergoes pancreatic surgery may have multiple drains in place postoperatively as well as a surgical incision that is left open for irrigation and repacking every 2 to 3 days to remove necrotic debris (Fig. 40-6). 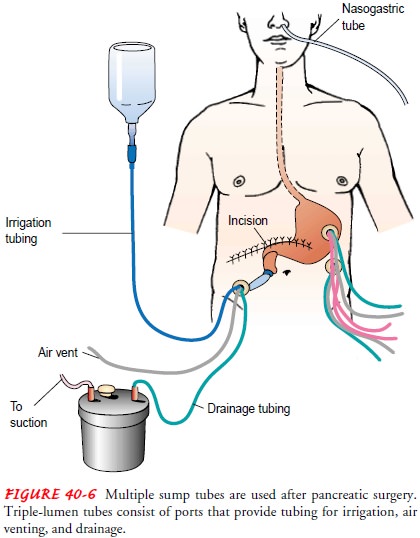 Antacids may be used when acute pancreatitis begins to resolve. Oral feedings low in fat and protein are initiated gradually. Caf-feine and alcohol are eliminated from the diet. If the episode of pancreatitis occurred during treatment with thiazide diuretics, corticosteroids, or oral contraceptives, these medications are dis-continued. Follow-up of the patient may include ultrasound, x-ray studies, or ERCP to determine whether the pancreatitis is resolv-ing and to assess for abscesses and pseudocysts. ERCP may also be used to identify the cause of acute pancreatitis if it is in ques-tion and for endoscopic sphincterotomy and removal of gall-stones from the common bile duct.