The democratic constitutional foundations have strengthened the Constitution in every aspect of socio-political and economic changes.

The founding fathers of India and its Constitution had built strong democratic foundations in the Indian State and the Constitution thus making India a great country. The democratic constitutional foundations have strengthened the Constitution in every aspect of socio-political and economic changes. The Preamble of the Constitution laid down clear road map with Fundamental Rights and Duties, Directive Principles; Parliamentary System and Amendment Procedures; Judicial Review and Basic Structure doctrine.

·     Since 2004, votes are recorded through (EVMs) electronic voting machines. These are manufactured in India and their accuracy is ensured and secrecy has been fully tested.

·     Our electoral system known as FPTP or

First-Past-The-Post system, is a single-member district, simple -plurality system in which voters cast a single ballot to choose a single representative to the lower house of parliament or the State legislative assembly, the candidate with largest number of votes, even if only a plurality, getting elected to represent the constituency.

·     Since 1989, the citizens were given a chance to elect their representatives at the age of 18, this is another feather in the crown of democracy.

·     India is the world’s the largest democracy proved success in accommodation of group and regional demands in a complex, quasi-federal, polity.

·              The 73rd and 74th amendment of the constitution has given the reservation for SC/STs, women in the Local self-governing bodies like panchayats, municipalities and corporations as members, councillors and mayors.

India’s democratic set up has been vibrant and able to keep the military out of political power. It also shows prudence on the part of military generals and defence personnel earning respect from the executive.

Social Front: The democratic process has brought about a shift of political power from the middle and higher castes and classes of urban society to backward classes who are now the politically most influential ones in the country. They have won reservations for themselves in legislatures and government services as were accorded to the Scheduled Castes and Scheduled Tribes after independence through Constitutional provisions.

India’s institutions like the free press and an independent judiciary have ensured that India remains a society based on rule of law.

The life expectancy at birth has almost doubled from 36 years in 1951 to 66 years in 2011 due to the availability of better health facilities and the health programmes consistently implemented for the well-being of the people to get away from the epidemics, endemics, communicable and non-communicable diseases. 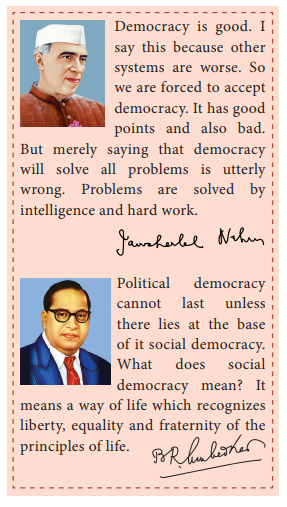 These include strategic affairs and security, politico-legal democratic governance as well as society and economy.

·              India has been able to emerge as a regional power in Asia and super power in south Asia backed by its economic, military and nuclear capabilities.

·              It meant centralized planning till 2017 and a very big public sector for industries catering employment and science and technology education for the youth in the country, but soon there were inefficiencies and labour issues it resulted in a move towards a more open liberalized and market driven model of the economy starting in the 1991 reforms called as Structural Adjustment Programme. Post this, the economy has seen greater private and foreign participation found the base for the emergence of professional new middle class. The technological innovations applied in transforming the service sector particularly Education, Health and transportation along with rural and urban infrastructure lead to digital India and reforms in banking sectors has brought a great social transformation in reality.

·              Food grain production grew from 50.8 million tonnes in 1950-51 to an estimated 264.77 million tonnes in 2014-15 that indicates more than a five-fold increase and the fact that India is food secure for the time being. It was made possible with rapid advances in agricultural technology.