INTERCHANGING ADDROUNDKEY AND INVMIXCOLUMNS The transformations Add- RoundKey and InvMixColumns do not alter the sequence of bytes in State. If we view the key as a sequence of words, then both AddRoundKey and InvMixColumns operate on State one column at a time. These two operations are linear with respect to the column input. That is, for a given State Si and a given round key wj,

8-BIT PROCESSOR AES can be implemented very efficiently on an 8-bit processor. AddRoundKey is a bytewise XOR operation. ShiftRows is a simple byte-shifting operation. SubBytes operates at the byte level and only requires a table of 256 bytes. The transformation MixColumns requires matrix multiplication in the field GF(28), which means that all operations are carried out on bytes.

The transformation MixColumns requires matrix multiplication in the field GF(28), which means that all operations are carried out on bytes. MixColumns only requires multiplication by {02} and {03}, which, as we have seen, involved simple shifts, conditional XORs, and XORs. This can be implemented in a more efficient way that eliminates the shifts and conditional XORs. Equation set (5.4) shows the equations for the MixColumns transformation on a single column. Using the identity {03}  x = ({02}  x) Ⓧ x, we can rewrite Equation set (5.4) as  follows.

The multiplication by {02} involves a shift and a conditional XOR. Such an imple- mentation may be vulnerable to a timing attack of the sort described in Section 3.4. To counter this attack and to increase processing efficiency at the cost of some storage, the multiplication can be replaced by a table lookup. Define the 256-byte table X2, such that X2[i] = {02}  i. Then Equation set (5.9) can be rewritten as 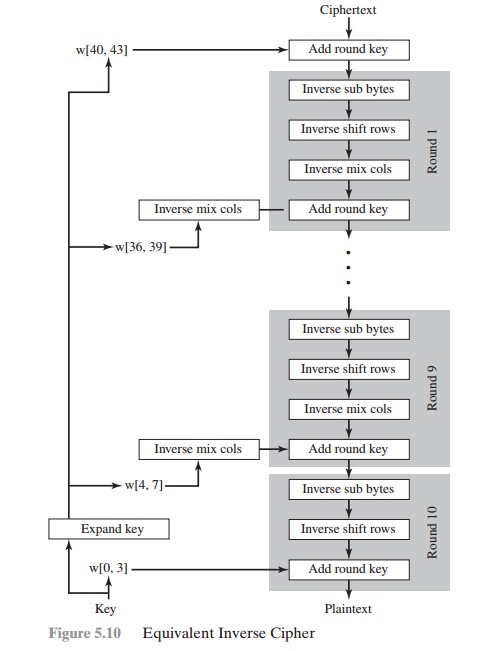 32-BIT PROCESSOR The implementation described in the preceding subsection uses only 8-bit operations. For a 32-bit processor, a more efficient implementation can be achieved if operations are defined on 32-bit words. To show this, we first define the four transformations of a round in algebraic form. Suppose we begin with a State matrix consisting of elements ai, j and a round-key matrix consisting of elements ki, j. Then the transformations can be expressed as follows. 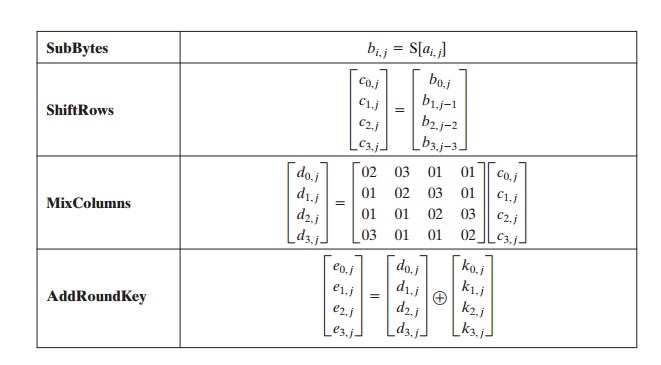 In the ShiftRows equation, the column indices are taken mod 4. We can com- bine all of these expressions into a single equation: 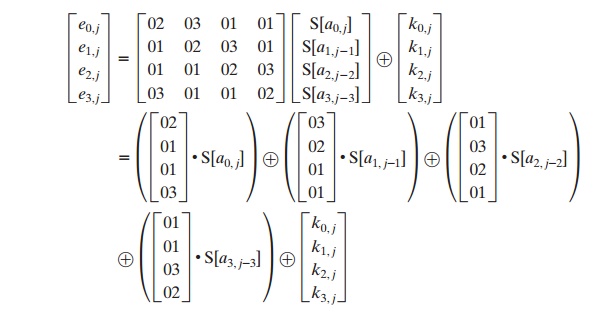 In the second equation, we are expressing the matrix multiplication as a linear com- bination of vectors. We define four 256-word (1024-byte) tables as follows.

Thus, each table takes as input a byte value and produces a column vector (a 32-bit word) that is a function of the S-box entry for that byte value. These tables can be calculated in advance.

We can define a round function operating on a column in the following fashion.

As a result, an implementation based on the preceding equation requires only four table lookups and four XORs per column per round, plus 4 Kbytes to store the table. The developers of Rijndael believe that this compact, efficient implementation was probably one of the most important factors in the selection of Rijndael for AES.