The schematic of a two phase or servo motor is shown

It has two windings displaced by 90oon the stator One winding, called as reference winding, is supplied with a constant sinusoidal voltage.

The second winding, called control winding, is supplied with a variable control voltage which is displaced by -- 90o out of phase from the reference voltage.

The rotor winding of an ac servo motor has high resistance (R) compared to its inductive reactance (X) so that its X / R ratio is very low.

For a normal induction motor, X / R ratio is high so that the maximum torque is obtained in normal operating region which is around 5% of slip. 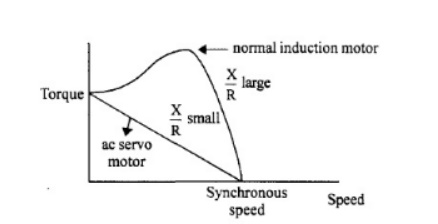 The Torque speed characteristic of a normal induction motor is highly nonlinear and has a positive slope for some portion of the curve.

This is not desirable for control applications. as the positive slope makes the systems unstable. The torque speed characteristic of an ac servo motor is fairly linear and has negative slope throughout.

The rotor construction is usually squirrel cage or drag cup type for an ac servo motor. The diameter is small compared to the length of the rotor which reduces inertia of the moving parts.

Thus it has good accelerating characteristic and good dynamic response.

The supplies to the two windings of ac servo motor are not balanced as in the case of a normal induction motor.

The control voltage varies both in magnitude and phase with respect to the constant reference vulture applied to the reference winding.

The direction of rotation of the motor depends on the phase (± 90°) of the control voltage with respect to the reference voltage.

For different rms values of control voltage the torque speed characteristics are shown in Fig.

The torque varies approximately linearly with respect to speed and also controls voltage. The torque speed characteristics can be linearised at the operating point and the transfer function of the motor can be obtained.