Members of this, the biggest and most primitive group of protozoans, are characterised by the long flagellum (mastigos= ‘a whip’), by which they propel themselves around.

Members of this, the biggest and most primitive group of protozoans, are characterised by the long flagellum (mastigos= ‘a whip’), by which they propel themselves around. Although typical zooflagellates have a single flagellum, some types possess several. The prefix ‘zoo-’ distinguishes them from plant-like flagellates such as Euglena, but as we have already mentioned, such a distinction is not necessarily warranted on molecular and structural grounds.

Zooflagellates may be free-living, symbiotic or para-sitic. An example of the latter is the causative agent of African sleeping sickness in humans, Trypanosoma bru-cei (Figure 9.11). This belongs to the kinetoplastids, agroup characterised by the possession of a unique or-ganelle called the kinetoplast, found within the cell’s single, large, tubular mitochondrion, and containing its own DNA. The flagellum extends back to form the edgeof a long, undulating membrane that gives Trypanosoma its characteristic locomotion. The infectious form of T. brucei develops in the salivary glands of the intermediate host, the tsetse fly, and is passed to the human host when a bite punctures the skin. Here, it eventually reaches the central nervous system by way of the blood or lymphatic systems. Inflammation of the brain and spinal cord results in the characteristic lethargy,coma and eventual death of the patient.

Reproduction in the zooflagellates is generally by binary fission. In the case of T.brucei, this occurs both in the human host and in the gut of the tsetse fly, from which itmigrates to the salivary glands to complete its life-cycle. 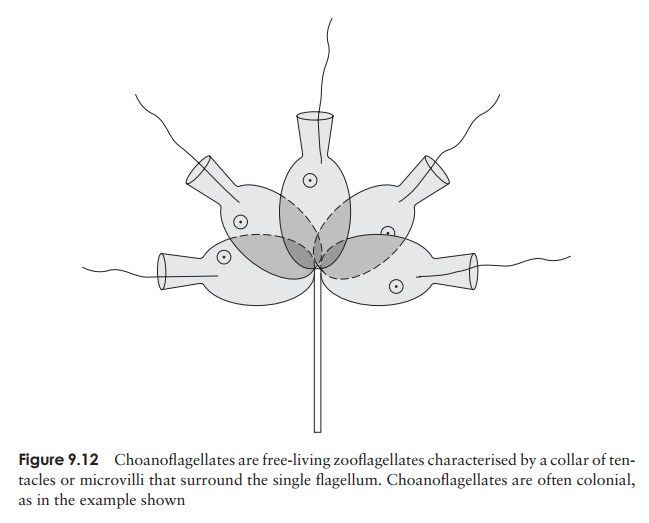 The choanoflagellates (Figure 9.12) are a group of zooflagellates of particular in-terest, as it is thought that they represent the closest single-celled relatives of animals. They possess a ‘collar’ of microvilli that surrounds the base of a single flagellum, an arrangement that is also seen in the simplest multicellular animals, the sponges. This connection is made even more apparent in colonial forms of choanoflagellates, and is supported by molecular evidence. Also, both choanoflagellates and animals share the flat, lamellar type of cristae in their mitochondria.

A third group of zooflagellates worthy of note are the diplomonads. These have two nuclei per cell and multiple flagella, but their most remarkable feature is that they do not apparently possess any mitochondria. Giardia lamblia, the causative agent of the intestinal disease giardiasis, is a member of this group. Unlike Trypanosoma, Giardia does not have a secondary host, but survives outside the body as a resistant cyst,before it is taken up again in infected water. The diplomonads occupy a very distant branch of suggested phylogenetic trees from the kinetoplastids and choanoflagellates (see Figure 9.18). The parabasalians are another group of amitochondriate flagellates, whose best-known member is Trichomonas vaginalis, a cause of infections of the female urogenital tract. 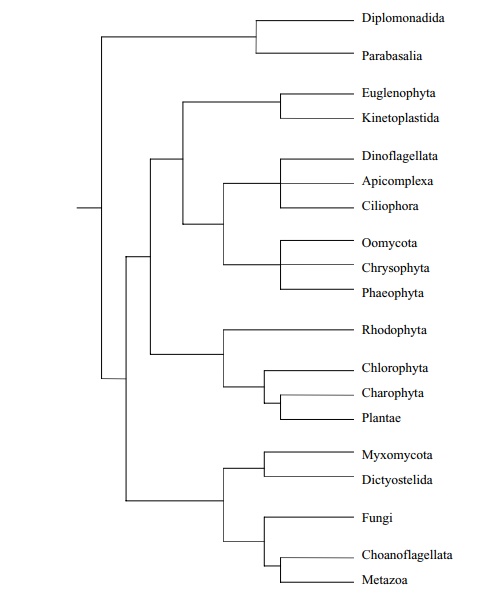