Working Principle and Methods of Starting of Synchronous Motors

Based on the type of input we have classified it into single phase and 3 phase motors. Among 3 phase induction motors and synchronous motors are more widely used.

Working Principle and Methods of Starting of Synchronous Motors

Based on the type of input we have classified it into single phase and 3 phase motors. Among 3 phase induction motors and synchronous motors are more widely used. 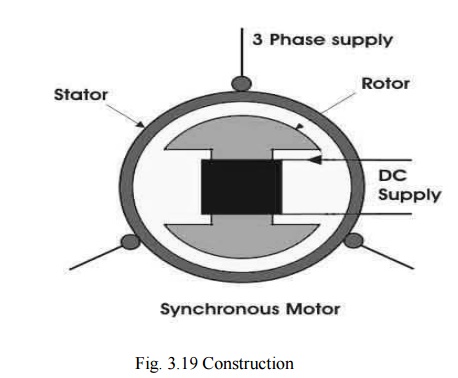 Normally its construction is almost similar to that of a 3 phase induction motor, except the fact that the rotor is given dc supply, the reason of which is explained later. No w, let us first go through the basic construction of this type of motor

From the above figure, it is clear that how this type of motors are designed. The stator is given is given three phase supply and the rotor is given dc supply.

§  Synchronous motors are inherently not self starting. They require some external means to bring their speed close to synchronous speed to before they are synchronized.

Synchronous motor is a doubly excited machine i.e two electrical inputs are p rovided to it. Its stator winding which consists of a 3 phase winding is provided with 3 phase supply and rotor is provided with DC supply. The 3 phase stator winding carrying 3 phase currents produces 3 phase rotating magnetic flux. The roto r carrying DC supply also produces a constant f lux. Considering the frequency to be 50 Hz, fro m the above relation we can see that the 3 phase rotating flux rotates about 3000 revolution in 1 min or 50 revolutions in 1 sec. At a particular instant rotor and stator poles might be of same polarity (N-N or S-S) causing repulsive force on rotor and the very next second it will be N-S causing attractive force. But due to inertia of the rotor, it is unable to rotate in any direction due to attractive or repulsive force and remain in standstill condition. Hence it is not self starting.

To overcome this inertia, rotor is initially fed some mechanical input which rotates it in same direction as magnetic field to a speed very close to synchronous speed. After some time magnetic locking occurs and the synchronous motor rotates in synchronism with the frequency.

Methods of Starting of Synchronous Motor

1.     Synchronous motors are mechanically coupled with another motor. It could be either 3 phase induction motor or DC shunt motor. DC excitation is not fed initially. It is rotated at speed very close to its synchronous speed and after that DC excitation is given. After some time when magnetic locking takes place supply to the external motor is cut off.

2.     Damper winding: In case, synchronous motor is of salient pole type, additional winding is placed in rotor pole face. Initially when rotor is standstill, relative speed between damper winding and rotating air gap flux in large and an emf is induced in it which produces the required starting torque. As speed approaches synchronous speed, emf and torque is reduced and finally when magnetic locking takes place, torque also reduces to zero. Hence in this case synchronous is first run as three phase induction motor using additional winding and finally it is synchronized with the frequency.