Types, Construction and Working Principle of Synchronous Generator or Alternator

Types, Construction and Working Principle of synchronous Generator or Alternator

Alternators or synchronous generators can be classified in many ways depending upon their application and design. According to application these machines are classified as-

These ac generators can be divided in many ways but we will discuss now two main types of alternator categorized according to their design. This are;

1.     Salient pole type. It is used as low and medium speed alternator. It has a large number of projecting poles having their cores bolted or dovetailed onto a heavy magnetic wheel of cast iron or steel of good magnetic quality. Such generators are characterized by their large diameters and short axial lengths. These generator are look like big wheel. These are mainly used for low speed turbine such as in hydro electric power plant.

2.     Smooth cylindrical type. It is used for steam turbine driven alternator. The rotor of this generator rotates in very high speed. The rotor consists of a smooth solid forged steel cylinder having a number of slots milled out at intervals along the outer periphery for accommodation of field coils. These rotors are designed mostly for 2 pole or 4 pole turbo generator running at 36000 rpm or 1800 rpm respectively.

2. Construction and working principle of Alternator 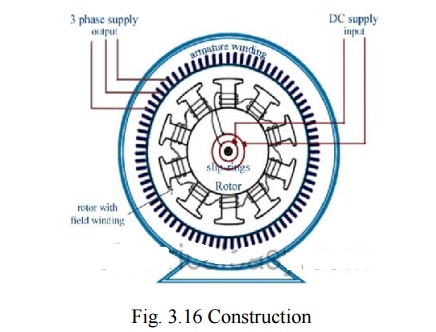 Main parts of the alternator, obviously, consists of stator and rotor. But, the unlike othermachines, in most of the alternators, field exciters are rotating and the armature coil is stationary.

Unlike in DC machine stator of an alternator is not meant to serve path for magnetic flux. Instead, the stator is used for holding armature winding. The stator core is made up of lamination of steel alloys or magnetic iron, to minimize the eddy current losses.

Why Armature Winding Is Stationary In An Alternator?

At high voltages, it easier to insulate stationary armature winding, which may be as high as 30 kV or more.

The high voltage output can be directly taken out from the stationary armature. Whereas, for a rotary armature, there will be large brush contact drop at higher voltages, also the sparking at the brush surface will occur.

Field exciter winding is placed in rotor, and the low dc voltage can be transferred safely.

The armature winding can be braced well, so as to prevent deformation caused by the high centrifugal force.

There are two types of rotor used in an AC generator / alternator:

(i) Salient and (ii) Cylindrical type

Cylindrical type: Cylindrical type rotors are used in high speed alternators, especially in turbo alternators. This type of rotor consists of a smooth and solid steel cylinder having slots along its outer periphery. Field windings are placed in these slots.

The working principle of alternator is very simple. It is just like basic principle of DC generator. It also depends upon Faraday's law of electromagnetic induction which says the current is induced in the conductor inside a magnetic field when there is a relative motion between that conductor and the magnetic field.

The DC supply is given to the rotor winding through the slip rings and brushes arrangement. Having understood the very basic principle of alternator, let us now have an insight into its basic operational principal of a practical alternator. During discussion of basic working of alternator, we have considered that the magnetic field is stationary and conductors (armature) are rotating. But generally in practical construction of alternator, armature conductors are stationary and field magnets rotate between them. The rotor of an alternator or a synchronous generator is mechanically coupled to the shaft or the turbine blades, which on being made to rotate at synchronous speed Ns under some mechanical force results in magnetic flux cutting of the stationary armature conductors housed on the stator. As a direct consequence of this flux cutting an induced emf and current starts to flow through the armature conductors which first flow in one direction for the first half cycle and then in the other direction for the second half cycle for each winding with a definite time lag of 120° due to the space displaced arrangement of 120° between them as shown in the figure 3.17. This particular phenomena result in 3φ power flow out of the alternator which is then transmitted to the distribution stations for domestic and industrial uses. 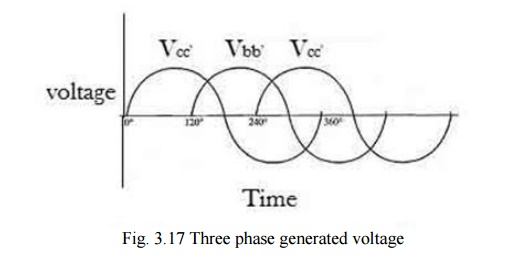