The Wireless Application Protocol (WAP)  is a universal, open standard developed  by the WAP Forum to provide mobile users of wireless phones and other wireless terminals such as pagers and personal digital assistants (PDAs) access to telephony and information services, including the Internet and the Web. WAP is designed to work with all wireless network technologies (e.g., GSM, CDMA, and TDMA). WAP is based on existing Internet standards, such as IP, XML, HTML, and HTTP, as much as possible. It also includes security facilities. At the time of this writing, the current release of the WAP specification is version  2.0.

Strongly affecting the use of mobile phones and terminals for data services are the significant limitations of the devices and the networks that connect them. The devices have limited processors, memory, and battery life. The user interface is also limited, and the displays small. The wireless networks are characterized by relatively low bandwidth, high latency, and unpredictable availability and stability compared to wired connections. Moreover, all of these features vary widely from terminal device to terminal device and from network to network. Finally, mobile, wireless users have different expectations and needs from other information systems users. For instance, mobile terminals must be extremely easy to use — much easier than workstations and personal computers. WAP is designed to deal with these challenges. The WAP specification includes:

The WAP Programming Model is based on three elements: the client, the gateway, and the original server (Figure 17.11). HTTP is used between the gateway and the original server to transfer content. The gateway acts as a proxy server for the wireless domain. Its processor(s) provide services that offload the limited capabilities of the hand-held, mobile, wireless terminals. For example, the gateway provides DNS services, converts between WAP protocol stack and the WWW stack (HTTP and TCP/IP), encodes infor- mation from the Web into a more compact form that minimizes wireless communica- tion, and in the other direction, decodes the compacted form into standard Web com- munication conventions. The gateway also caches frequently requested information.

Figure 17.12 illustrates key components in a WAP environment. Using WAP, a mobile user can browse Web content on an ordinary Web server. The Web server provides content in the form of HTML-coded pages that are transmitted using the standard Web protocol stack (HTTP/TCP/IP). The HTML content must go through an HTML filter, which either may be colocated with the WAP proxy or in a separate physical module. The filter translates the HTML content into WML content. If the filter is separate from the proxy, HTTP/TCP/IP is used to deliver the WML to the proxy. The proxy converts the WML to a more compact form known as binary WML and delivers it to the mobile user over a wireless network using the WAP protocol stack. If the Web server is capable of directly generating WML content, then the WML is delivered using HTTP/TCP/IP to the proxy, which converts the WML to binary WML and then delivers it to the mobile node using WAP protocols.

The WAP architecture is designed to cope with the two principal limitations of wireless Web access: the limitations of the mobile node (small screen size, limited input capability) and the low data rates of wireless digital networks. Even with the introduction of 3G wireless networks, which provide broadband data rates, the small hand-held mobile nodes continue to have limited input and display capabilities. Thus, WAP or a similar capability will be needed for the indefinite future.

WML was designed to describe content and format for presenting data on devices with limited bandwidth, limited screen size, and limited user input capability. It is designed to work with telephone keypads, styluses, and other input devices common to mobile, wireless communication. WML permits the scaling of displays for use on two-line screens found in some small devices, as well as the larger screens found on smart phones. 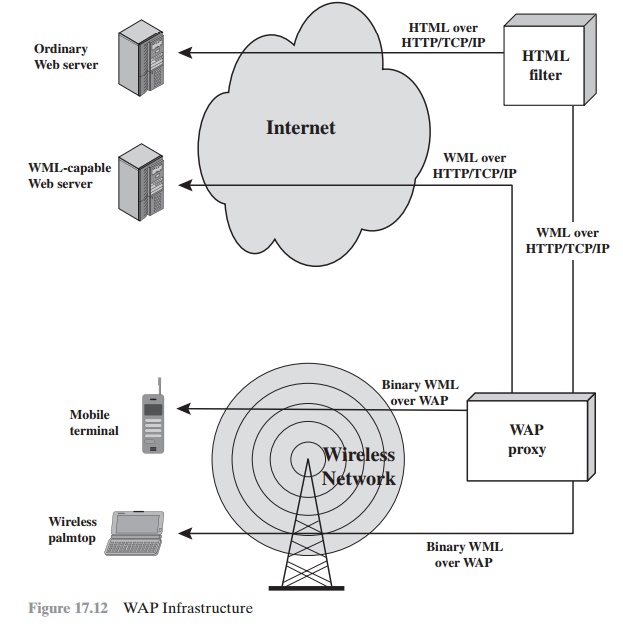 For an ordinary PC, a Web browser provides content in the form of Web pages coded with the Hypertext Markup Language (HTML). To translate an HTML- coded Web page into WML with content and format suitable for wireless devices, much of the information, especially graphics and animation, must be stripped away. WML presents mainly text-based information that attempts to capture the essence of the Web page and that is organized for easy access for users of mobile devices.

Important features of WML include:

•                 Text and image support: Formatting and layout commands are provided for text and limited image capability.

Deck/card organizational metaphor: WML documents are subdivided into small, well-defined units of user interaction called cards. Users navigate by moving back and forth between cards. A card specifies one or more units of interaction (a menu, a screen of text, or a text-entry field). A WML deck is similar to an HTML page in that it is identified by a Web address (URL) and is the unit of content transmission.

In an HTML-based Web browser, a user navigates by clicking on links. At a WML-capable mobile device, a user interacts with cards, moving forward and back through the deck.

Figure 17.13, from the WAP architecture document, illustrates the overall stack architecture implemented in a WAP client. In essence, this is a five-layer model. Each layer provides a set of functions and/or services to other services and applica- tions through a set of well-defined interfaces. Each of the layers of the architecture is accessible by the layers above, as well as by other services and applications. Many of the services in the stack may be provided by more than one protocol. For exam- ple, either HTTP or WSP may provide the Hypermedia Transfer service.

Common to all five layers are sets of services that are accessible by multiple layers. These common services fall into two categories: security services and service discovery. 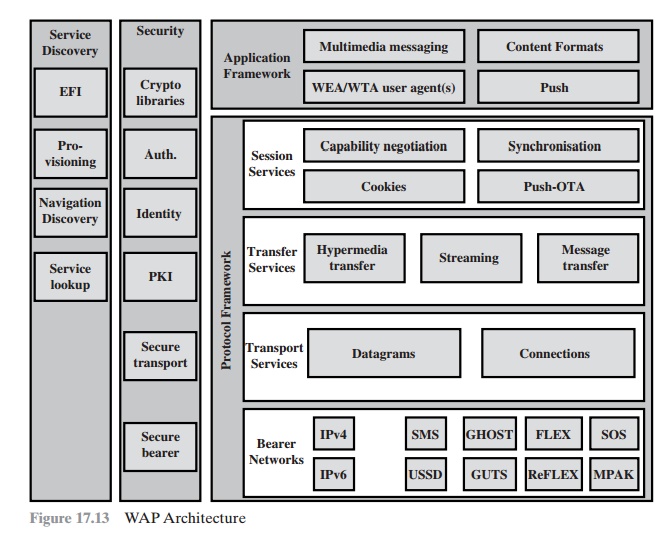 SECURITY SERVICES The WAP specification includes mechanisms to provide confidentiality, integrity, authentication, and nonrepudiation. The security services include the following.

•                 Identity: The WAP Identity Module (WIM)  provides  the  functions that store and process information needed for user identification and authentication.

•                 PKI: The set of security services that enable the use and management of public-key cryptography and certificates.

•                 EFI: The External Functionality Interface (EFI) allows applications to discover what external functions/services are available on the   device.

•                 Provisioning: This service allows a device to be provisioned with the parame- ters necessary to access network services.

•                 Navigation discovery: This service allows a device to discover new network services (e.g., secure pull proxies) during the course of navigation such as when downloading resources from a hypermedia server. The WAP Transport- Level End-to-End Security specification, described in  Section  17.5, defines one navigation discovery  protocol.

•                 Service lookup: This service provides for the discovery of a service’s parame- ters through a directory lookup by name. One example of this is the Domain Name System (DNS).

The WAE specifies an application framework for wireless devices such as mobile telephones, pagers, and PDAs. In essence, the WAE consists of tools and  formats that are intended to ease the task of developing applications and devices supported by WAP. The major elements of the WAE model (Figure 17.13) are

•                          Push: A service to receive push transmissions from the server, i.e., transmis- sions that are not in response to a Web client request but are sent on the initiative of the server. This service is supported by the Push-OTA (Push Over The Air) session service.

The WAP architecture illustrated in Figure 17.13 dictates a collection of services at each level and provides interface specifications at the boundary between each pair of layers. Because several of the services in the WAP stack can be provided using different protocols based on the circumstances, there are more than one possible stack configurations. Figure 17.14 depicts a common protocol stack configuration in which a WAP client device connects to a Web server via a WAP gateway. This con- figuration is common with devices that implement version 1 of the WAP specifica- tion but is also used in version 2 devices (WAP2) if the bearer network does not support TCP/IP.

In the remainder of this subsection, we provide an overview of the WAP protocols, with the exception of WTLS, which is treated in Section 17.4.

WSP is a transaction-oriented protocol based on the concept of a request and a reply. Each WSP protocol data unit (PDU) consists of a body, which may contain WML, WMLScript, or images; and a header, which contains information about the data in the body and about the transaction. WSP also defines a server push opera- tion, in which the server sends unrequested content to a client device. This may be used for broadcast messages or for services, such as news headlines or stock quotes, that may be tailored to each client device.

WIRELESS TRANSACTION PROTOCOL WTP manages transactions by conveying requests and responses between a user agent (such as a WAP browser) and an application server for such activities as browsing and e-commerce transactions. WTP provides a reliable transport service but dispenses with much of the overhead of TCP, resulting in a lightweight protocol that is suitable for implementation in “thin” clients (e.g., mobile nodes) and suitable for use over low-bandwidth wireless links. WTP includes the following features.

•                 PDU concatenation and delayed acknowledgment to reduce the number of messages sent.

WTP provides three transaction classes that may be invoked by WSP or another higher layer protocol:

Class 0 provides an unreliable datagram service, which can be used for an unre- liable push operation. Data from a WTP user are encapsulated by WTP (the initiator, or client) in an invoke PDU and transmitted to the target WTP (the responder, or server) with no acknowledgment. The responder WTP delivers the data to the target WTP user.

Class 1 provides a reliable datagram service, which can be used for a reliable push operation. Data from an initiator are encapsulated in an invoke PDU and transmitted to the responder. The responder delivers the data to the target WTP user and acknowledges receipt of the data by sending back an ACK PDU to the WTP entity on the initiator side, which confirms the transaction to the source WTP user. The responder WTP maintains state information for some time after the ACK has been sent to handle possible retransmission of the ACK if it gets lost and/or the initiator retransmits the invoke PDU.

Class 2 provides a request/response transaction service and supports the execu- tion of multiple transactions during one WSP session. Data from an initiator are encapsulated in an invoke PDU and transmitted to the responder, which delivers the data to the target WTP user. The target WTP user prepares response data, which are handed down to the local WTP entity. The responder WTP entity sends these data back in a result PDU. If there is a delay in generating the response data beyond a timer threshold, the responder may send an ACK PDU before sending the result PDU. This prevents the initiator from unnecessarily retransmitting the invoke message.

WIRELESS DATAGRAM PROTOCOL WDP is used to adapt a higher-layer WAP protocol to the communication mechanism (called the bearer) used between the mobile node and the WAP gateway. Adaptation may include partitioning data into segments of appropriate size for the bearer and interfacing with the bearer network. WDP hides details of the various bearer networks from the other layers of WAP. In some instances, WAP is implemented on top of IP.