WTLS provides security services between the mobile device (client) and the WAP gateway. WTLS is based on the industry-standard Transport Layer Security (TLS) Protocol,3 which is a refinement of the Secure Sockets Layer (SSL) protocol. TLS is the standard security protocol used between Web browsers and Web servers. WTLS is more efficient that TLS, requiring fewer message exchanges. To provide end-to- end security, WTLS is used between the client and the gateway, and TLS is used between the gateway and the target server (Figure 17.14). WAP systems translate between WTLS and TLS within the WAP gateway. Thus, the gateway is a point of vulnerability and must be given a high level of security from external attacks.

Two important WTLS concepts are the secure session and the secure connection, which are defined in the specification as:

Between any pair of parties (applications such as HTTP on client and server), there may be multiple secure connections. In theory, there may also be multiple simultaneous sessions between parties, but this feature is not used in practice.

A session state is defined by the following parameters:

•                 Session identifier: An arbitrary byte sequence chosen by the server to identify an active or resumable session state.

The connection state is the operating environment of the record protocol. It includes all parameters that are needed for the cryptographic operations (encryp- tion/decryption and MAC calculation/verification). Each secure connection has a connection state, which is defined by the following parameters.

WTLS is not a single protocol but rather two layers of protocols, as illustrated in Figure 17.15. The WTLS Record Protocol provides basic security services to various higher-layer protocols. In particular, the Hypertext Transfer Protocol (HTTP), which provides the transfer service for Web client/server interaction, can operate on top of WTLS. Three higher-layer protocols are defined as part of WTLS: the Handshake Protocol, The Change Cipher Spec Protocol, and the Alert Protocol. These WTLS-specific protocols are used in the management of WTLS exchanges and are examined subsequently in this section. 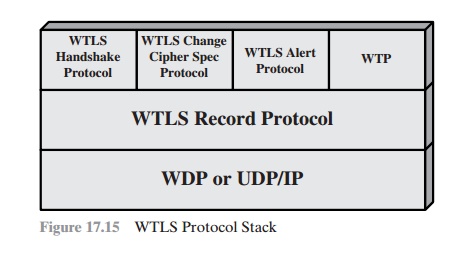 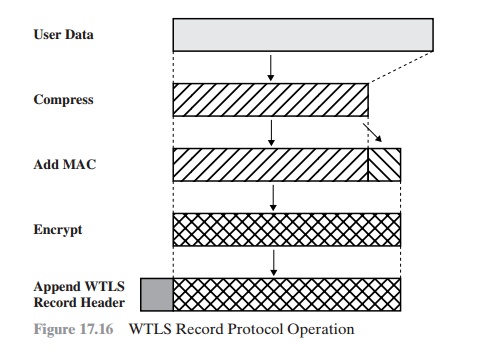 Step 1.   The payload is compressed using a lossless compression  algorithm.

Step 4.  The Record Protocol prepends a header to the encrypted payload.

The Record Protocol header consists of the following fields (Figure 17.17).

–Cipher spec indicator (1 bit): If this bit is zero, it indicates that no compression, MAC protection, or encryption is  used.

CHANGE CIPHER SPEC PROTOCOL Associated with the current transaction is a cipher spec, which specifies the encryption algorithm, the hash algorithm used  as 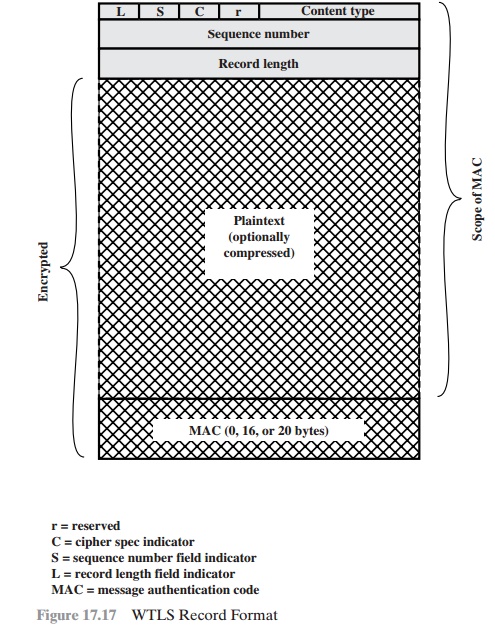 part of HMAC, and cryptographic attributes, such as MAC code size. There are two states associated with each session. Once a session is established, there is a current operating state for both read and write (i.e., receive and send). In addition, during the Handshake Protocol, pending read and write states are  created.

ALERT PROTOCOL The Alert Protocol is used to convey WTLS-related alerts to the peer entity. As with other applications that use WTLS, alert messages are compressed and encrypted, as specified by the current state.

Error handling in the WTLS is based on the alert messages. When an error is detected, the detecting party sends an alert message containing the occurred error. Further procedures depend on the level of the error that occurred.

•                 session_close_notify: notifies the recipient that the sender will not send any more messages using this connection state or the secure session.

•                 handshake_failure: Sender was unable to negotiate an acceptable set of security parameters given the options available.

•                 connection_close_notify: Notifies the recipient that the sender will not send any more messages using this connection state.

The Handshake Protocol consists of a series of messages exchanged by client and server. Figure 17.18 shows the initial exchange needed to establish a  logical 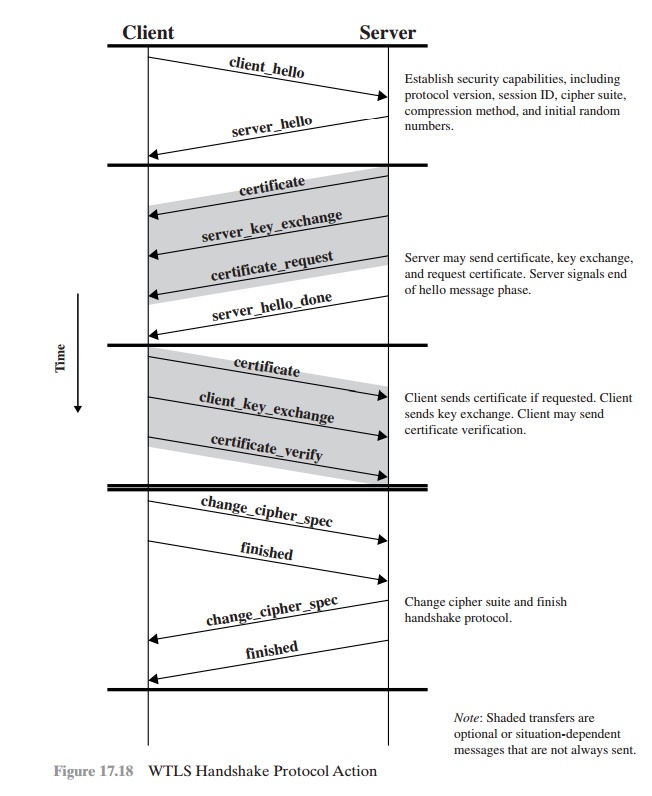 connection between client and server. The exchange can be viewed as having four phases.

The first phase is used to initiate a logical connection and to establish the security capabilities that will be associated with it. The exchange is initiated by the client. The client sends a client_hello message that includes a session ID and a list of cryptographic and compression algorithms supported by the client (in decreasing order of preference for each algorithm type). After sending the client_hello message, the client waits for the server_hello message. This message indicates which cryptographic and compression algorithms will be used for the exchange.

The second phase is used for server authentication and key exchange. The server begins this phase by sending its public-key certificate if it needs to be authenticated. Next, a server_key_exchange message may be sent if it is required. This message is needed for certain public-key algorithms used for symmetric key exchange. Next, the server can request a public-key certificate from the client, using the certificate_request message. The final message in phase 2 (and one that is always required) is the server_hello_done message, which is sent by the server to indicate the end of the server hello and associated messages. After sending this message, the server will wait for a client response. This message has  no parameters.

The fourth phase completes the setting up of a secure connection. The client sends a change_cipher_spec message and copies the pending CipherSpec into the current CipherSpec. Note that this message is not considered part of the Handshake Protocol but is sent using the Change Cipher Spec Protocol. The client then immediately sends the finished message under the new algorithms, keys, and secrets. The finished message verifies that the key exchange and authentication processes were successful. In response to these two messages, the server sends its own change_cipher_spec message, transfers the pending to the current CipherSpec, and sends its finished message. At this point, the hand- shake is complete, and the client and server may begin to exchange application layer data.

However, the WTLS specification defines that authentication is an optional procedure. Currently, X.509v3, X9.68, and WTLS certificates are supported. The WTLS certificate is optimized for size, and consists of the following elements (compare with Figure 14.14).

KEY EXCHANGE The purpose of the WTLS protocol is for the client and server to generate a mutually shared pre-master key. This key is then used to generate as master key, as explained subsequently. A number of key exchange protocols are supported by WTLS. They  can be  grouped into those protocols that include    a server_key_exchange message as part of the Handshake Protocol (Figure 17.18) and those that don’t.

•                          DH_anon: The conventional Diffie-Hellman computation is performed anonymously (without authentication). The negotiated key (Z) is used as the pre_master_secret.

PSEUDORANDOM FUNCTION(PRF) The PRF is used for a number of purposes in WTLS. The PRF takes as input a secret value, a seed, and an identifying label and produces an output of arbitrary length. In the TLS standard, two hash algorithms were used in order to make the PRF as secure as possible. In order to save resources, WTLS can be implemented using only one hash algorithm. Which hash algorithm is actually used is agreed on during the handshake as a part of the cipher spec.

The PRF is based on the data expansion function 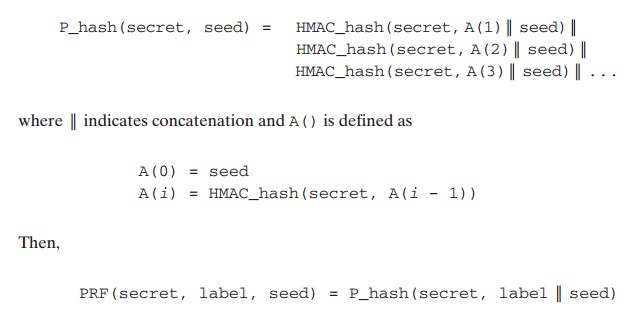 MASTER KEY  GENERATION  The shared master secret is a one-time 20-byte value  (160 bits) generated for this session by means of secure key exchange.The creation is in two stages. First, a pre_master_secret is exchanged. Second, the master_secret is calculated by both parties, using the  function

where ClientHello.random and ServerHello.random are the random numbers exchanged during the first phase of the handshake protocol.

The MAC and encryption keys are then derived from the master key. The MAC calculation uses the HMAC algorithm (Chapter 12) and encompasses the fields indicated in the expression

Either MD5 or SHA-1 may be used for the HMAC hash function.

Encryption is applied to all of the WTLS record, except the header. The following encryption algorithms are permitted.