The basic WAP transmission model involving a WAP client, a WAP gateway, and a Web server results in a security gap, as illustrated in Figure 17.19.

The basic WAP transmission model involving a WAP client, a WAP gateway, and a Web server results in a security gap, as illustrated in Figure 17.19. This figure corre- sponds to the protocol architecture shown in Figure 17.14. The mobile device estab- lishes a secure WTLS session with the WAP gateway. The WAP gateway, in turn,

establishes a secure SSL or TLS session with the Web server. Within the gateway, data are not encrypted during the translation process. The gateway is thus a point at which the data may be compromised.

There are a number of approaches to providing end-to-end security between the mobile client and the Web server. In the WAP version 2 (known as WAP2) architecture document, the WAP forum defines several protocol arrange- ments that allow for end-to-end security.

The first approach (Figure 17.20a) is to make use of TLS between client and server. A secure TLS session is set up between the endpoints. The WAP gateway acts as a TCP-level gateway and splices together two TCP connections to carry the traffic between the endpoints. However, the TCP user data field (TLS records) remains encrypted as it passes through the gateway, so end-to-end security is maintained. 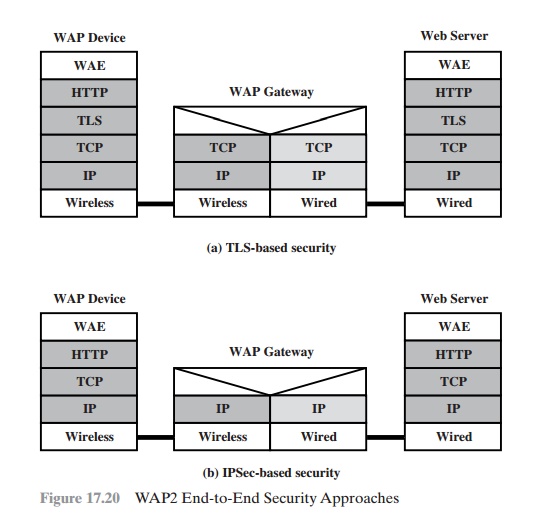 Another possible approach is shown in Figure 17.20b. Here we assume that the WAP gateway acts as a simple Internet router. In this case, end-to-end security can be provided at the IP level using IPsec (discussed in Chapter 19).

Yet another, somewhat more complicated, approach has been defined in more specific terms by the WAP forum in specification entitled “WAP Transport Layer End-to-End Security.” This approach is illustrated in Figure 17.21, which is based on a figure in [ASHL01]. In this scenario, the WAP client connects to its usual WAP gateway and attempts to send a request through the gateway to a secure domain. The secure content server determines the need for security that requires that the mobile client connect to its local WAP gateway rather than its default WAP gateway. The Web server responds to the initial client request with an HTTP redirect message that redirects the client to a WAP gateway that is part of the enterprise network. This message passes back through the default gateway, which validates the redirect and sends it to the client. The client caches the redirect information and establishes a secure session with the enterprise WAP gateway using WTLS. After the connection is terminated, the default gateway is reselected and used for subsequent communication to other Web servers. Note that this approach requires that the enterprise maintain a WAP gateway on the wireless net- work that the client is using.

Figure 17.22, from the WAP specification, illustrates the  dialogue. 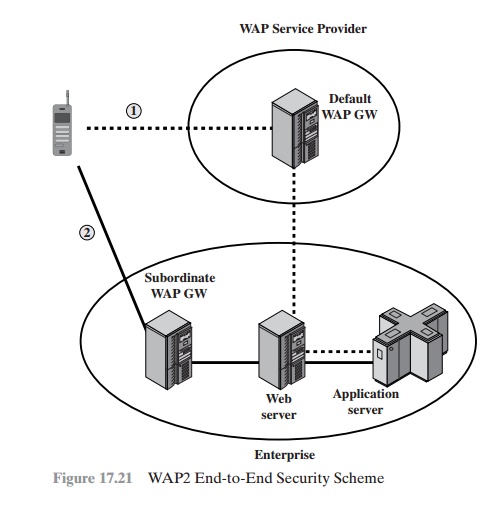 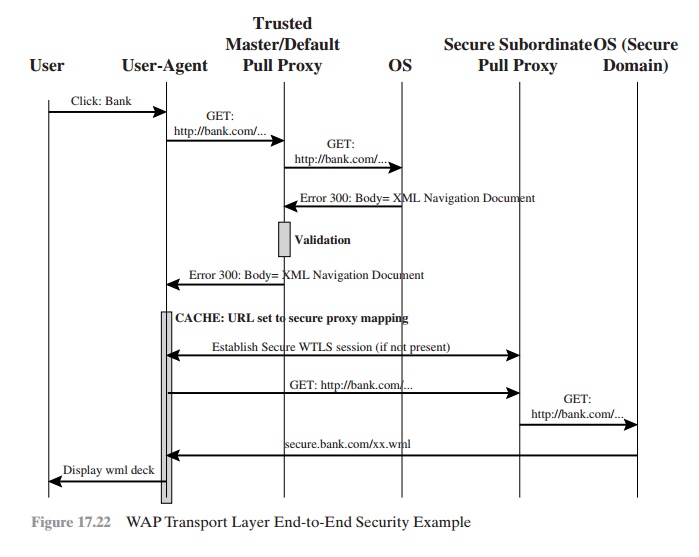