What are the clinical implications of blunt cardiac trauma?

By definition, blunt cardiac trauma encompasses a wide variety of pathologic conditions, including varying degrees of myocardial damage; coronary artery injury; cardiac free wall, interatrial or interventricular septal or valvular ruptures; and, with impalement by a fractured sternum or rib, a penetrating injury from blunt trauma.

What are the clinical implications of blunt cardiac trauma?

By definition, blunt cardiac trauma encompasses a wide variety of pathologic conditions, including varying degrees of myocardial damage; coronary artery injury; cardiac free wall, interatrial or interventricular septal or valvular ruptures; and, with impalement by a fractured sternum or rib, a penetrating injury from blunt trauma. The term blunt cardiac injury (BCI), formerly called myocardial contusion, refers to myocardial damage involving myofibrillar disinte-gration, edema, bleeding, or necrosis that, depending on its severity, clinically presents as minor ECG or cardiac enzyme abnormalities, complex dysrhythmias, or cardiac pump fail-ure. Some of these injuries may be caused by myocardial damage from direct mechanical injury or indirectly as a result of coronary occlusion or exacerbation of pre-existing coronary artery disease by the stress of trauma. Cardiac lesions, seen as ECG abnormalities and troponin release, may also be the result of increased catecholamine activity following severe central nervous system injury and hemor-rhagic shock with little or no direct trauma to the heart. 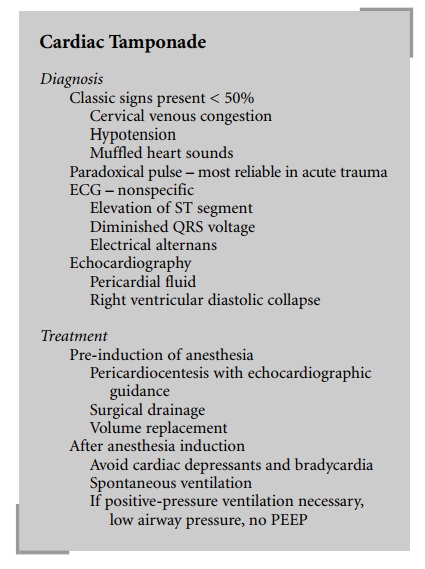 In major trauma, multiple injuries frequently coexist with BCI. The perioperative physician must be able to:

·  anticipate the possibility of cardiac-induced hemodynamic and rhythm abnormalities that may occur during the clinical course of a patient who may initially be stable;

·  determine the contribution of cardiac trauma to the existing overall circulatory abnormality caused by hemorrhage, hypothermia, acid–base and electrolyte abnormalities, or various other causes; and implement the most appropriate management based on these findings.

The incidence of BCI in blunt thoracic trauma is approximately 20%, although it may be as high as 76% in severe injuries. Nevertheless, major cardiac complications requiring treatment are considerably less likely to occur; however, when they do occur they may be fatal.

BCI may be associated with direct precordial impact, crush injury of the chest causing compression of the heart between the sternum and the spine, deceleration injuries, and blast injuries. Suggestive signs and symptoms include chest pain, angina responding to nitroglycerine, dyspnea, chest wall ecchymosis, and fractures of ribs and/or sternum. There is no gold standard for diagnosing blunt cardiac trauma. However, ECG, blood concentration of troponin I, and echocardiogra-phy are important. In addition, coronary angiography or ventriculography may very rarely be indicated to diagnose coronary lesions, cardiac rupture, or valve injuries.

A 12-lead ECG is the best screening test. Nonspecific changes such as tachycardia, bradycardia, or occasional atrial or ventricular premature contractions occur in 50–70% of patients, and usually do not require treatment. More serious alterations such as ST or T wave changes, conduction delays, and complex atrial and ventricular dysrhythmias occur less frequently (4–30%) but often need to be treated. Although sensitive, the ECG is not specific and a normal trace cannot rule out the diagnosis. Because of its anterior position, the right ventricle is injured more frequently than the left. However, standard leads, which are primarily useful to detect left-sided abnormalities, will miss some right heart events. Overall the sensitivity, speci-ficity, and negative predictive value of ECG for predicting cardiac complications are 100%, 47%, and 90%, respec-tively. Although delayed (>24 hours) appearance of serious ECG abnormalities may very rarely occur, it has been demonstrated that a normal ECG on admission virtually eliminates the risk of complications of blunt cardiac trauma and the need for further evaluation, as long as the patient is hemodynamically stable, has no history of cardiac disease, is less than 55 years old, and does not have multiple injuries or significant chest wall trauma. If these compromising condi-tions exist, however, cardiac monitoring for at least 24 hours in a telemetry ward or intensive care unit is indicated. Of course, an abnormal ECG should be followed by contin-uous cardiac monitoring. Additionally, obtaining serum tro-ponin I concentration 6 and 12 hours after the injury in hemodynamically stable patients, and echocardiography in hemodynamically unstable patients, should be considered.

Serum creatine kinase (CK) and creatine kinase MB (CK-MB) determinations, which were frequently used to diagnose myocardial contusion, are no longer performed because of their low specificity. Skeletal muscle, colon, lung, liver, and pancreatic tissue contain both CK and CK-MB. Thus in multiple trauma, a positive value may not indicate cardiac injury. Troponin I, on the other hand, is specific for cardiac muscle. However, negative levels of CK-MB or troponin I do not rule out clinically relevant BCI, because in many cardiac trauma patients muscle disintegration is not significant enough to release detectable enzyme levels. Yet even a small area of myocardial damage can cause dysrhythmias if it is in a critical location.

Echocardiography may be helpful in many ways in BCI. It provides information about myocardial function (wall motion abnormalities, increased end-diastolic wall thick-ness), cardiac structural abnormalities (echo-dense areas on the ventricular walls, valve malfunction, hemopericardium, intracardiac thrombi), cardiac preload (end-diastolic area), systolic cardiac function (fractional ventricular area change), and air embolism (air bubbles in the cardiac chambers, patent foramen ovale). Echocardiography can help not only with the diagnosis of BCI but also in hemodynamic manage-ment. TEE is a much more valuable monitor than TTE, whose usefulness is limited by mechanical ventilation, pleu-ral effusion, pneumothorax, and difficulty in placing the patient in left lateral decubitus position. Furthermore, myocardial contusion, hemopericardium, valvular lesions, hemomediastinum, and aortic rupture are more likely to be recognized with TEE than with TTE. Nevertheless, it is important to eliminate esophageal injury before attempting TEE in chest trauma patients. However, dysrhythmias, unex-plained hypotension, and/or heart failure are definite indica-tions for TTE or TEE.

Depending on its type and extent, BCI can increase surgi-cal risk. Although most patients with cardiac chamber perforation do not reach the hospital, some, especially those with atrial lesions, may reach the operating room. Thus pre-operative information about the nature of injury is impor-tant. Some retrospective reports have documented an increased incidence of intraoperative dysrhythmias and hypotension in patients with preoperatively diagnosed myocardial contusion. It is not entirely clear whether these occurrences were due to the myocardial injury itself or to the complications of associated injuries. Nevertheless, the combination of atrial fibrillation, old age, and aortic rupture with myocardial contusion appears to increase perioperative mortality. The duration of complications is also a relevant issue for the anesthesiologist, since many trauma patients present days to months after injury. In the vast majority of patients, dysrhythmias last no more than a few days. Ventricular wall motion abnormalities may persist for up to a year, but any increased risk of perioperative complications appears to last for no more than 1 month. An intracardiac thrombus, a well-known complication of myocardial contu-sion, may be present more than 1 year after injury, further emphasizing the need for preoperative echocardiography even well after the accident.

The clinical presentation of patients with BCI varies; sometimes more than one compromising condition may be present in the same patient. Orliguet et al. (2001) proposed an algorithm describing the management principles for each of these scenarios (Figure 79.3). Dysrhythmias appear to respond readily to antiarrhythmic agents. Hypotension may be caused by hypovolemia, pump failure, or both. Fluid loading, with monitoring of heart function by echocardiography or right heart catheterization, will improve hypovolemia. Pump failure is usually caused by right ventricular dysfunction exacerbated by increased pul-monary vascular resistance due to pulmonary contusion, aspiration of gastric contents, or ARDS. An initial right ventricular free wall dilatation may be followed by leftward ventricular septal shift, which alters the geometry and compliance of the left ventricle increasing left ventricular filling pressure and decreasing cardiac output. This should by no means be a signal to decrease fluid loading. On the contrary, volume replacement should continue with concomitant use of inotropes and pulmonary vasodilators. Positive-pressure ventilation may also be adjusted to mini-mize intrathoracic pressure and thus right ventricular afterload. High-frequency jet ventilation with its relatively low mean airway pressure may be beneficial in these circumstances. As shown in the algorithm, hemoperi-cardium is treated by drainage, either surgically or by placement of a large-bore catheter with echocardiographic guidance. Anticoagulants, if used, should be stopped. Myocardial infarction and valvular, septal, and coronary vascular injuries are treated in the same way as they would be in the absence of trauma. Of course, severe trauma may dictate surgery before angioplasty, coronary artery bypass, or repair of injured cardiac valves or a septal defect. 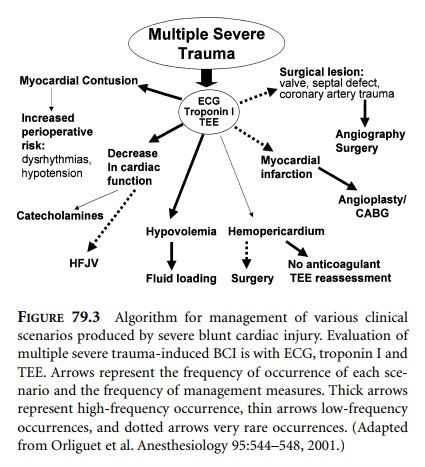 Very rarely pump failure may be unresponsive to pharma-cologic measures and requires cardiac assistance. The ventricular balloon pump has been used in these rare cases of BCI. However, in most patients dysfunction originates from the right ventricle. Thus, if assistance is needed, biventricular assist devices would probably be preferable.