Biological weapons are weapons that spread disease among the general population or the military.

Biological warfare is a covert method of severely affecting thetarget. Overall, biological weapons are easily obtained and easily disseminated, and they result in significant mortality and mor-bidity. The potential use of biological agents calls for continuous increased surveillance by health departments and an increased index of suspicion by clinicians. Many biological weapons re-sult in signs and symptoms similar to those of common disease processes.

Biological agents are delivered in either a liquid or dry state, applied to foods or water, or vaporized for inhalation or direct contact. Vaporization may be accomplished through spray or ex-plosives loaded with the agent. With increased travel, an agent could be released in one city and affect people in other cities thou-sands of miles away. The vector can be an insect, animal, or per-son, or there may be direct contact with the agent itself.

The following is a discussion of two of the agents most likely to be used or weaponized. Table 72-2 describes other easily weap-onized biological agents. 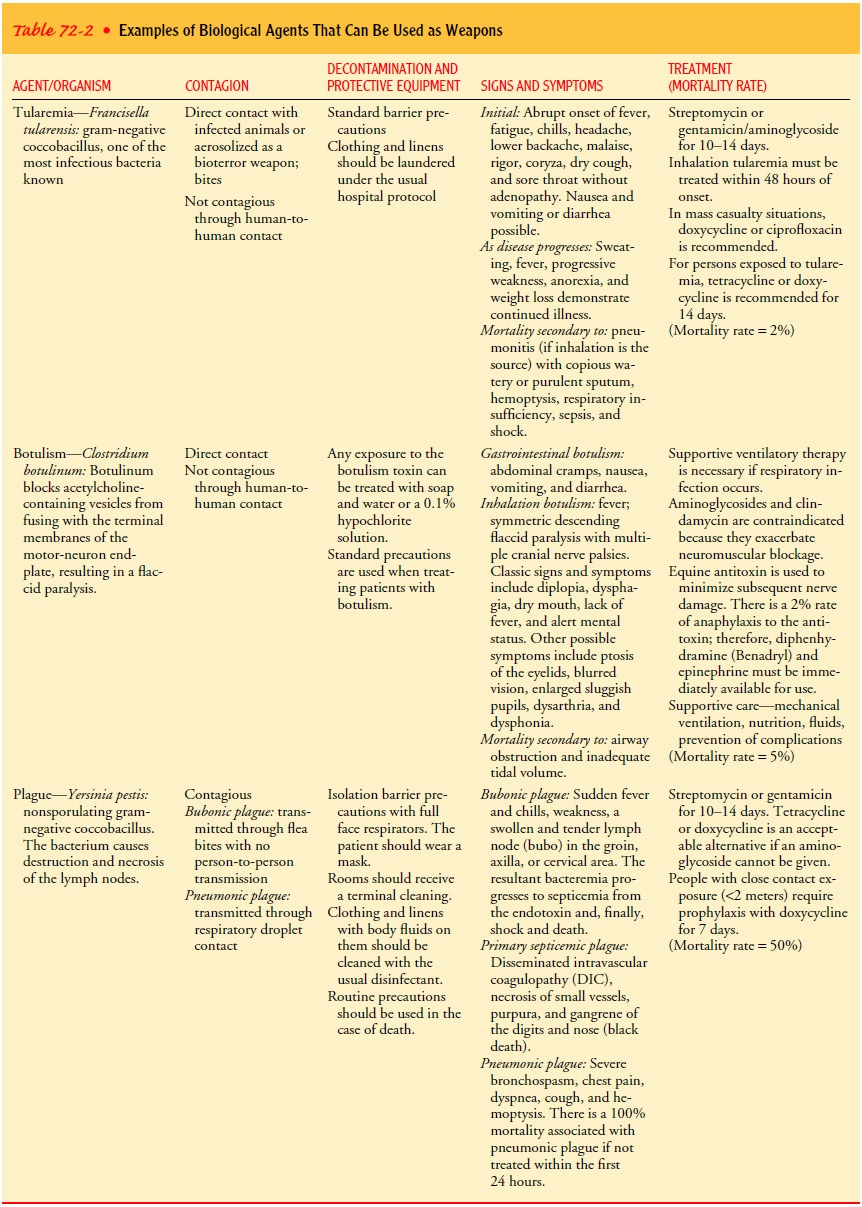 Bacillus anthracis is a naturally occurring gram-positive, encapsu-lated rod that lives in the soil in the spore state throughout the world. The bacterium sporulates (is liberated) when exposed to air and is infective only in the spore form. Contact with infected animal products (raw meat) or inhalation of the spores results in infection. Cattle and other herbivores are vaccinated against an-thrax to prevent transmission through contaminated meat.

It is believed that approximately 8000 to 50,000 spores must be inhaled to put a person at risk. As an aerosol, anthrax is odor-less and invisible and can travel a great distance before dissemi-nating; hence, the site of release and the site of infection can be miles apart.

Anthrax is recognized as the most likely weaponized biological agent available. Anthrax has been known as a highly debilitating agent for centuries. It is believed that the plague in 1500 BC Egypt was caused by anthrax (Spencer, Whitman & Morton, 2001). In 1979, Sverdlosk, Russia, experienced the intentional release of anthrax, with widespread mortality and morbidity. Anthrax was released with the sarin gas attack in Tokyo, Japan, in 1995; how-ever, the method of release chosen was poorly designed for effect.

Anthrax is caused by replicating bacteria that release toxin re-sulting in hemorrhage, edema, and necrosis. The incubation period is from 1 to 6 days. There are three primary methods of infection: skin contact, inhalation, and gastrointestinal ingestion. Skin lesions (the most common infection) cause edema with pruritis and macule or papule formation resulting in ulceration with 1- to 3-mm vesicles. A painless eschar develops, which falls off in 1 to 2 weeks.

The inhalation form of anthrax is the most severe. Its symp-toms mimic those of the flu, and usually treatment is sought only when the second stage of severe respiratory distress occurs. At this point, even antibiotic therapy will not halt the progress of the dis-ease. The inhalation form can have an incubation period of up to 60 days, making it difficult to identify the source of the bacterium. Initial signs and symptoms include cough, headache, fever, vom-iting, chills, weakness, mild chest discomfort, dyspnea, and syn-cope, without rhinorrhea or nasal congestion.

Most patients have a brief recovery period followed by the sec-ond stage within 1 to 3 days, characterized by fever, severe respira-tory distress, stridor, hypoxia, cyanosis, diaphoresis, hypotension, and shock. These patients require optimization of oxygenation, correction of electrolyte imbalances, and ventilatory and hemody-namic support. More than 50% of these patients have hemorrhagic mediastinitis on chest x-ray (a hallmark sign) (Spencer, Whitman,

Morton 2001; Altman, 2002; Inglesby et al., 1999). The disease can also progress to include meningitis with subarachnoid hemor-rhage. Death results in approximately 24 to 36 hours after the onset of severe respiratory distress. The mortality rate nears 100%.

Presently anthrax is penicillin sensitive; however,the Russian government has been involved in the production of penicillin-resistant anthrax. Recommended treatment includes penicillin, erythromycin, chloramphenicol, gentamicin, or doxy-cycline. If antibiotic treatment begins within 24 hours after ex-posure, death can be prevented (Franz & Zajtchuk, 2000). In a mass casualty situation, ciprofloxacin or doxycycline is recommended. Treatment is continued for 60 days. For patients who have been directly exposed to anthrax but have no signs and symptoms of disease, ciprofloxacin or doxycycline is used for prophylaxis fordays.

When caring for a patient infected with anthrax, standard pre-cautions are all that are necessary. The patient is not contagious, and the disease cannot be spread from person to person. Equip-ment should be cleaned using standard hospital disinfectant. After death, cremation is recommended because the spores can survive for decades and represent a threat to morticians and foren-sic medicine personnel.

Variola is classified as a DNA virus. It has an incubation period of approximately 12 days. It is extremely contagious and is spread by direct contact, contact with clothing or linens, or by droplets from person to person only after the fever has decreased and the rash phase has begun (Inglesby et al., 1999). There is an associ-ated 30% case-fatality rate. Aerosolization of the virus would re-sult in widespread dissemination. The World Health Organization (WHO) declared smallpox eradicated in 1977 and stopped world-wide vaccination in 1980. In the United States, the last child was vaccinated in 1972. Therefore, a large portion of the current pop-ulation has no immunity to the virus. Recently, plans have been instituted in the U.S. for smallpox vaccination, with health care personnel being the first to receive the vaccine.

Smallpox was used as biowarfare during the French and Indian War in 1754–1767, when blankets from smallpox patients were sent into the Indian camps, resulting in greater than 50% fatality rates (Inglesby et al., 1999). Smallpox virus survives for up to 24 hours in cool temperatures and low humidity.

Signs and symptoms include high fever, malaise, headache, backache, and prostration. After 1 to 2 days, a maculopapular rash appears, evolving at the same rate and beginning on the face, mouth and pharynx, and forearms (Fig 72-1). Only then does the rash pro-gress to the trunk and also become vesicular to pustular (Inglesby et al., 1999; Hagstad, 2000; Franz & Zajtchuk, 2000). There is a large amount of the virus in the saliva and pustules. Smallpox (variola) is contagious only after the appearance of the rash. Vari-ola major has a 30% case fatality rate. Hemorrhagic smallpox in-cludes all of the above signs and symptoms with the addition of a dusky erythema and petechiae to frank hemorrhage of the skin and mucous membranes, resulting in death by day 5 or 6. Variola minor produces fewer constitutional symptoms and a sparse rash.

Treatment includes supportive care with antibioticsfor any additional infection. The patient must be isolated with the use of transmission precautions. Laundry and biological wastes should be autoclaved before being washed with hot water and bleach. Standard decontamination of the room is effective. All persons who have household or face-to-face contact with the patient after the fever begins should be vaccinated within 4 days to prevent infection and death (Franz & Zajtchuk, 2000; Inglesby et al., 1999). A patient with a temperature of 38°C (101°F) or higher within 17 days after exposure requires isola-tion. Postvaccination encephalitis occurs in approximately 1 of every 300,000 patients and has a 25% fatality rate. Cremation is preferred for all deaths, because the virus can survive in scabs for up to 13 years.